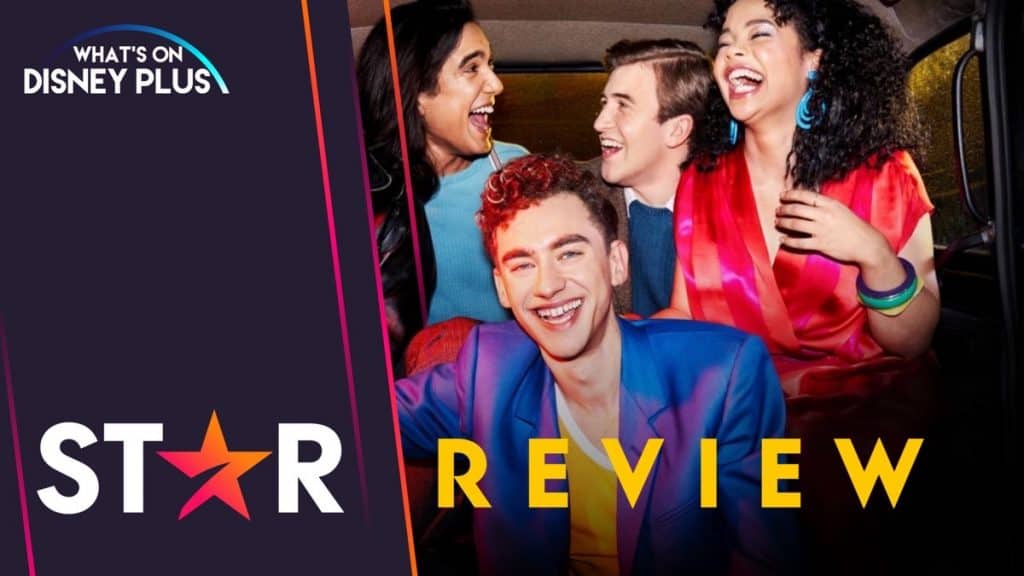 This 5-part limited series follows four friends across a decade (1981 through 1991) as their hopeful, extravagant existence among the gay scene of London is gradually encroached on by the ghoulish spectre that is the AIDS virus…

I know what the vast majority of my readers are probably thinking right now: “I go on Disney+ regularly and I’ve never seen It’s a Sin available to watch! What are you talking about?” And most of you would be absolutely correct. For my American readers, you’ll find it as a “HBO Max Original”. Internationally, it appears to be scattered to various different streaming services. However, here in the UK, Disney have demonstrated a very substantial commitment to offering local programming and films from our own little island. To the point where, (as reported by this very website) we have our own region-specific and robust collection:

It’s a Sin was a surprise addition to this rapidly growing assortment back in April. Ever since that unexpected arrival, I knew I had to highlight this tour de force of poignancy and heartbreak. All things considered, the first week of Pride Month felt like perfect timing. In all honesty, I’m not sure I could call this a “review”. It’s more of an essay extolling the virtues of a modern television masterpiece. Take a load off and put aside a few minutes to read my gushing recommendation.

It’s a Sin focuses on a group of 4 friends. This core cast are Ritchie, (Olly Alexander) Roscoe, (Omari Douglas) Colin (Callum Scott Howells) and Jill (Lydia West). Over the course of 5 episodes spanning 10 years, we see the group meet, live, love and laugh. The 3 boys revel in the excesses of the gay scene in 1980s London, while Jill is the loving friend who often serves as the voice of reason among the constant party atmosphere. At least until the dark cloud that is the AIDS virus intrudes further and further into their lives.

There’s no denying that the central premise of this series is exceedingly dark. However, it is buoyed by the exceptional chemistry of the entire main cast. They feel like true friends. They talk how friends talk. You believe that they like and care for each other while still bantering and forming their own natural friend subgroups. All of this means that you immediately accept these characters as people without needing excessive exposition in the dialogue and are instead effortlessly carried along for the heart wrenching journey that this group of friends – practically a surrogate family – are put through.

While I absolutely have praise for the entire main cast, Olly Alexander as Ritchie Tozer completely steals the show. He effectively serves as the unofficial “leader” of this little group. He’s the guy with the grandest aspirations (wanting to be an actor) with seemingly all of the tools to make it happen. He has confidence over-brimming into arrogance. His charisma leaps off the screen at you, imploring you to love him, even as he tumbles down into a hedonistic, self-destructive lifestyle and makes choices that many would struggle to forgive.

Seeing as I’m extolling the virtues of Olly Alexander’s performance, I feel duty bound to acknowledge the perfect narrative mirror that is Lydia West’s Jill Baxter. She is the window into this story for the heterosexual audience. As far as we’re aware, she is not gay. In fact, it’s a genuine critique of the series that she can be singled out as the biggest character with the least developed backstory. But still, she plays a vital role.

She is the sensible one. She registers the danger of the AIDS crisis very early on. She scrambles to find information to protect both herself and her friends. When her attempts to protect fail, so stands by all of them until the bitter end. In truth, perhaps Jill is too perfect. Perhaps the cynical side of me should dismiss her as the kind of non-existent saint prevalent in fiction. And yet, West plays the character so warmly and with such a humane, caring outlook that I hope there really are people out there like her. Because the world needs more of them.

It’s at this point that I should make something painfully clear: It’s a Sin does not pull its punches. It depicts the growing fear, terror and hatred that the developing AIDS crisis drew to the surface. It doesn’t shy away from the copious amounts of unprotected sex that took place in the gay community during a time when excess was encouraged by society as a whole. It is a mature subject presented in an unflinching manner. And it is rated as such (with a 16+ rating here in the UK). For most people, it will be upsetting and unsettling. And that’s just what it needed to be to hit home with the general public.

With all of that said, there are still moments of much-needed levity. After all, we are dealing with a group of friends who took every opportunity to have fun. They joke with each other, they retell funny stories and they can even be humorously blunt with one another. And all of this stops the bleak undercurrent underpinning the story from feeling oppressive. And yet at the same time, these moments of unbridled joy work to make the bitterly sad scenes hit so much harder.

Perhaps there is no better example of this series masterfully balancing emotional tone than in its soundtrack. The music comprises of pop hits contemporary to the time period. On their surface, they’re often upbeat and chipper (mimicking the abundance of gay party scenes we see) but they’ve been so carefully chosen that their lyrics subtlety reference a lot of the more haunting, sorrowful aspects of the tragedy that unfolds onscreen. Sometimes, the music is even brought to a screeching halt, forcing the viewer to come face to face with the crushing consequences of disease and ultimately death.

My conclusions usually quickly sum up my thoughts on what you’ve just read. If you’ll forgive me on this occasion, I’d like to get on my soapbox for a moment because I have something to say. In the year 2022, it’s become rather easy to grow cynical about Pride Month. That perhaps the real fight is over and that LGBTQ+ people don’t really need to “make a big deal” about who they are anymore. We all just need to get on with life. I know that as a heterosexual male, that idea has flitted around in my brain from time to time when I was younger.

It’s a Sin reminded me why I and people like me are mistaken. This series reminded me that we’re all different. In my case, I am visibly different thanks to severe Cerebral Palsy. I realised through watching this series that I truly do identify with the LGBTQ+ community. I am different and have been treated differently all of my life. I have been mocked for not being “normal”. On rare occasions, I’ve been verbally attacked for not acting contrite enough for the numerous benefits I receive that allow me to live comfortably. As if enjoying life is a privilege that should be grovelled for rather than something that should be the bare minimum for all. Feeling different is hard enough. It’s even harder when you don’t feel accepted by the world.

Stories like these are the reminders we need to not get complacent. We like to tell ourselves that society is progressive now. That anyone can be who they wish without judgment or fear of reprisals. And in many ways that is true. We are improving. But as a race, we are also still innately fearful and easily pushed to hatred by insecurity. We reject things we don’t understand and mock them if they refuse to conform. So yes, LGBTQ+ people still have every right to celebrate who they are. Because until we as a species all truly learn to accept everyone with open hearts and minds, we’re only ever one scary, unexplainable crisis away from turning on each other once again.

It’s a Sin is available on Disney+ in a maximum resolution of 1080p HD and standard 5.1 surround sound on compatibility devices. This is in line with the highest quality available physically.

It’s a Sin has no “Extras” tab, although in fairness, this is standard for series on the service.

“It’s a Sin” is available to stream on Disney+ now in the UK. American readers can find it on HBO Max.

What are your thoughts on “It’s a Sin”?

Jon has been a Disney fan all of his life. From wearing out those expensive VHS tapes and visiting Disneyland Paris as a child to becoming a huge fan of the MCU in adulthood, Disney has helped shape some of the happiest, most fun moments he can remember.
View all posts
Tags: it's a sin, Reviews, star