Disney introduces us to two more interesting dogs in their Disney+ Original series “It’s a Dog’s Life.” This week we meet a dog that is part of the corps of cadets at Texas A&M university and a guide dog helping a visually impaired paralympian as he trains for an upcoming race.

This is my favorite episode of the series so far; mostly because it seems to have an established theme for the episode. Both of the dogs we meet this week are connected to sports. The first two episodes seemed to have a random pairing of dogs. In fact, if they took the dog that works with whales from the first episode and spliced it with the dog that works with cheetahs from the second episode to give it an established theme, I think it would be an improvement. So, seeing the dog at Texas A&M have a direct connection to the college football team and the second dog working with the paralympics made the episode better.

On top of the established theme, I felt a wave of nostalgia when Bill Farmer was introducing us to Reveille. I lived in Texas for years and college football is my favorite sport. I’m very familiar with the tradition of having Reveille run out on the field in College Station before each Aggie home football game. Any reminder of home is wonderful to me, so I’m especially partial to anything involving Texas and college football.

It’s really cool to see Reveille treated like a celebrity and get the pampered treatment before her big moment on Saturdays in the Fall. But, the real star of this episode is Tricia. While Reveille is cool, Tricia is a hero. She steps up as a guide dogs for a paralympic sprinter in New York as he trains for his next race. Guide dogs are simply awesome to learn about. It’s amazing how they are able to step up and help humans do things they can’t do on their own. I hope to see more guide dogs as this series progressed and see how the many different ways they are able to help their humans. 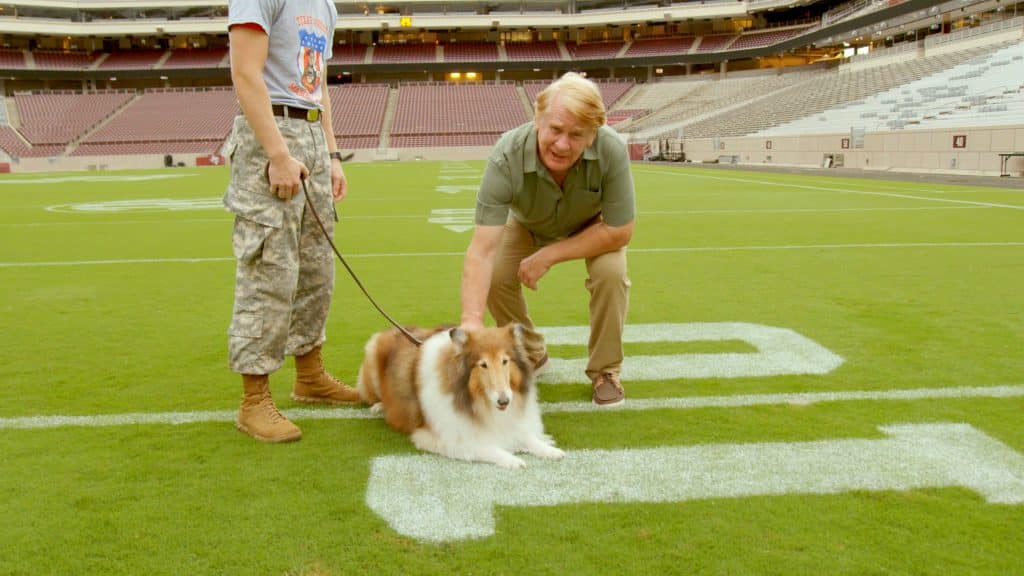 There are some really cool segments involved this show to. I really enjoyed Pluto’s Pointers and Goofy’s Hometown Heroes. In Pluto’s Pointers, Bill Farmer gives the viewer some excellent tips for working with their own dogs. And, in Goofy’s Hometown Heroes, we get to meet everyday dogs that aren’t going to be featured in the heart of the show and see how they saved their owners in some way.

I love adorable dog content and Disney+ has no shortage of that. This is the latest in a long line of adorable dog shows and movies on the app. But, in the end, this may be the fluffiest of the adorable dog content. I’m, thoroughly, enjoying this show, but it’s far from necessary viewing. I can understand why this wouldn’t appeal to some people, but it appeals to me.

Disney+ has been experimenting with different ways of delivering content. Some shows still have the weekly episode delivery, while others have every episode put on the app at one. While I’m enjoying the show, “It’s a Dog’s Life” feels like every episode could drop all at once rather than weekly. That’s a change that I would like to see implemented should this series get a second season.

What did you think of this episode of “It’s a Dog’s Life?”