The Walt Disney Company finds a way to hold its annual holiday celebration even amid a pandemic with “The Wonderful World of Disney Magical Holiday Celebration.” Most years, Disney has various musical artists perform Christmas classics at the parks at Walt Disney World for this special. But, with social distancing in place, Disney came up with a unique way to put this special together.

Derek and Julianne Hough, along with Trevor Jackson, hosted this year’s celebration. The trio would introduce previous performances that made up the celebration in past years. At other points during the show, we would see the castles at the Disney parks around the globe lit up from previous years as we would see the light projection show against the castles while “Can You Feel the Love Tonight?” played in the native language to each park.

It’s the holiday special version of a clip show. When a TV show is close to going over budget, the producers will roll out old clips of previous episodes to put together a new episode. That’s basically what Disney did here and I’m all for it. I love the celebration in the parks. I understand why those celebrations can’t be held this year, but I’m glad we got something to show the wonder and majesty of those parks. It’s a nice bit of nostalgia. I understand, for some, it’s a sad reminder of what we don’t have this year. But, for others, including myself, it’s a nice reminder of what will be waiting for us when the pandemic is over. 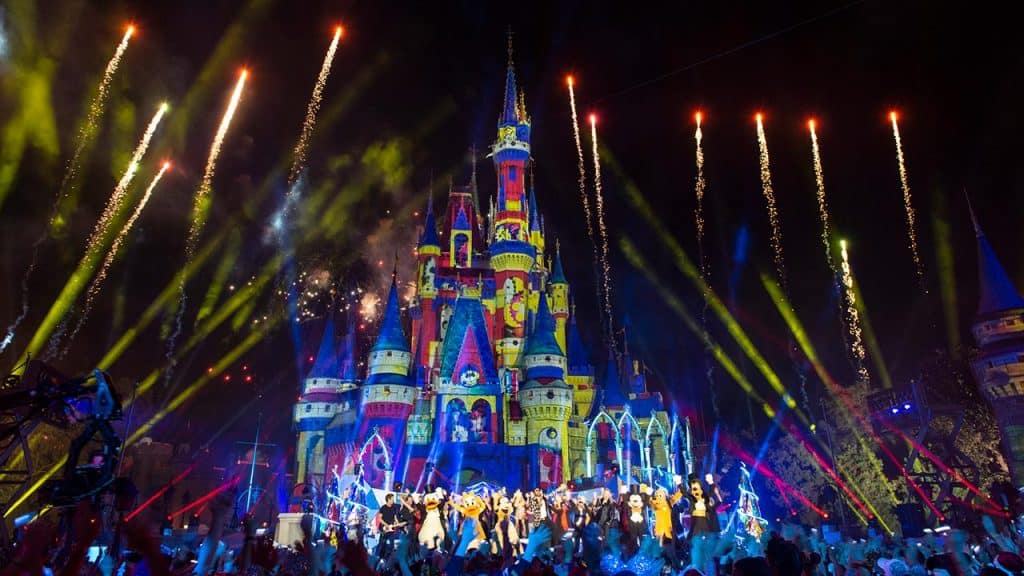 These are all wonderful performances that were great to see again, spliced together from the previous four years. And, along the way, we received holiday wishes from several personalities on networks owned by Disney; including ABC, ESPN, Freeform and Disney Channel. There was also a nice announcement from Neil Patrick Harris about Disney, again, teaming up with Toys for Tots to help make Christmas a little brighter for less fortunate children. As someone who has donated to Toys for Tots since I was a Junior in High School, it’s a cause that’s near and dear to my heart and I’m glad that Disney is stepping up to help

In 2021, I hope we get a big celebration with the parks completely full. I would love to see a special with performances from Orlando, Anaheim, Paris, Tokyo, Hong Kong and Shanghai. I doubt we’ll get one that big, but I’m hopeful. For now, these are beautiful songs sung by talented performers, amazing light shows lighting up wondrous castles and nice well wishes from our favorite shows, news and sports programs. I really enjoyed it and hope anyone else who watches it does too.

What did you think of “The Wonderful World of Disney Magical Holiday Celebration?”

Jeremy has been a big Disney fan since he was a kid growing up during the Disney Renaissance. One day he hopes to go to every Disney Park in the world.
View all posts
Tags: abc, disney, Magical Holiday Celebration, review, The Wonderful World of Disney