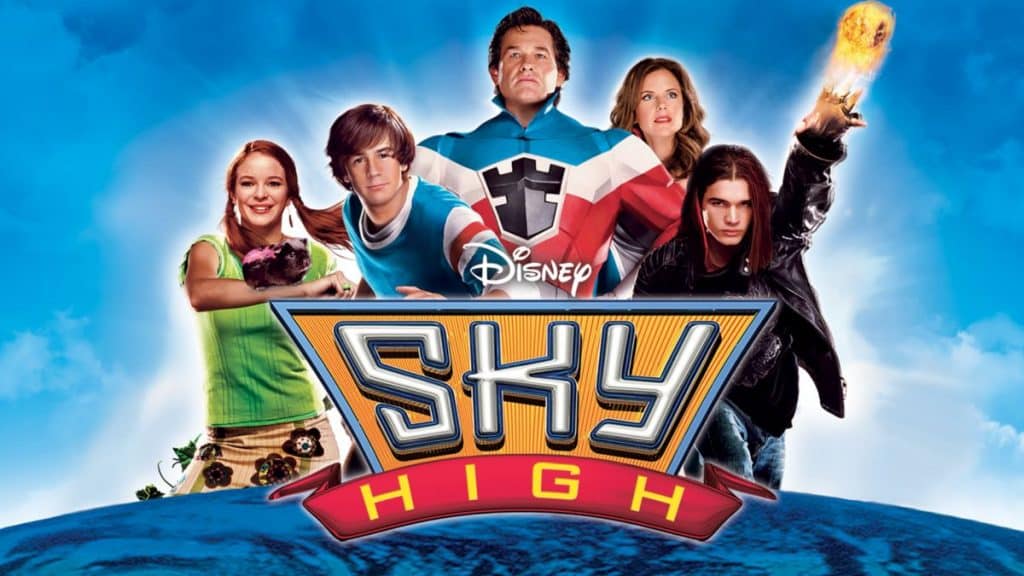 Disney is constantly looking into its past to bring us new content for Disney+ and recently one of the co-writers of the 2005 comedy movie, Sky High, Mark McCorkle, has been discussing the idea of a sequel possibly coming to Disney+.

With Superhero movies being so popular, Disney’s live-action comedy, sees a superpowered kid called Will, enrolled in Sky High, a school for the children of superheroes. There, he discovers his true powers and learns about loyalty and friendship.  The film stars Kurt Russell and Kelly Preston as the superheroes The Commander and Jetstream, which has gone onto become a cult classic, as the film keeps the “Silver-Age” feel of superheroes, rather than the more down to earth style we see now in movies and shows.

In an interview with Inverse Mark Mccorkle said:

“To me, it’s a very natural fit for Disney+, and over the years we always thought maybe a sequel could happen one of these days.  There was always a belief that this was a rich enough world to keep going with new ideas. At least Mike seems to believe it. I guess if the film still has that same affection of people watching it and streaming it on Disney+, who knows. Maybe if the people speak, their wishes will be answered.”

Due to an existing streaming contract, Sky High is currently available on HBO Max in the United States until December, though it is available on Disney+ in many countries now.

There have been rumours of sequels to the movie in the past, but nothing came of them. Still, it seems now if fans were able to get behind the project using social media and watching the movie, it could send the signal to Disney executives about bringing back Sky High.

A fan campaign has worked on bringing back many beloved franchises, such as the recent Snyder cut of the Justice League for HBO Max.   Disney does listen to feedback when creating new content, but with all the Marvel shows & movies in production and the upcoming “Secret Society Of Second Born Royals” coming next month to Disney+, do we need a Sky High sequel?

Would you like to see a new Sky High movie or series on Disney+?

Roger has been a Disney fan since he was a kid and this interest has grown over the years. He has visited Disney Parks around the globe and has a vast collection of Disney movies and collectibles. He is the owner of What's On Disney Plus & DisKingdom. Email: Roger@WhatsOnDisneyPlus.com Twitter: Twitter.com/RogPalmerUK Facebook: Facebook.com/rogpalmeruk
View all posts
Tags: sky high