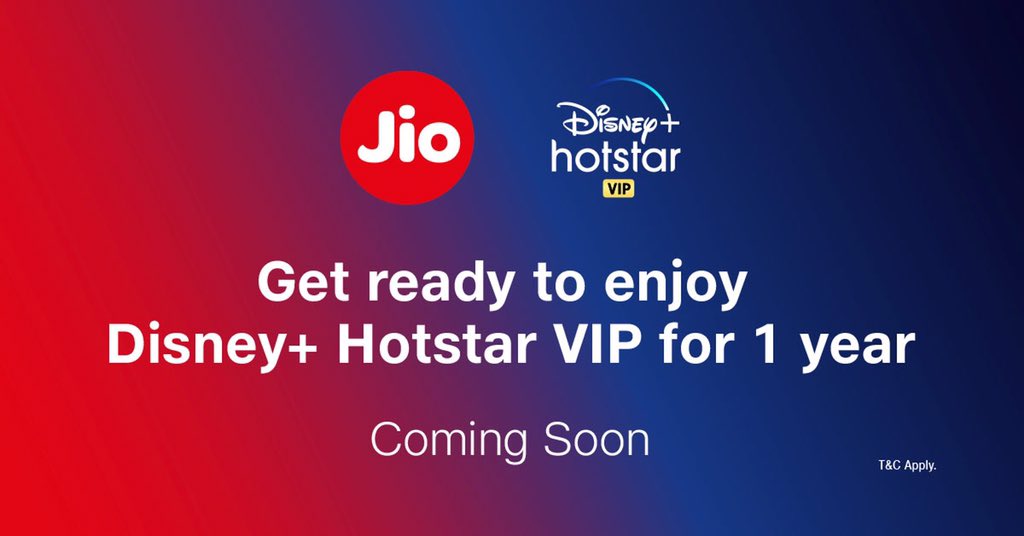 Indian mobile phone provider, Reliance Jio, has teased a new bundle, which will give Jio users, access to a Disney+ Hotstar VIP subscription for a year.  Customers can either choose monthly, annual or data add-on vouchers, to get the free benefit at no extra cost.

The monthly plan is priced at Rs 401 and offers 90GB of 4G data, unlimited voice calling and access to Jio apps valid for 28 days. This plan also entitles a year subscription of Disney+ Hotstar VIP worth Rs 399.

Disney+ Hotstar VIP subscribers can explore the world of great entertainment in a language of their choice. Subscribers will now get expanded access to the entire Marvel Cinematic Universe and the best of superheroes movies like The Avengers, Iron Man, Thor Ragnarok, latest and biggest movies including The Lion King, Frozen II, Aladdin and Toy Story 4. Families can spend quality time together with engaging content and characters like Mickey Mouse, Gajju Bhai, Doraemon and Shin-chan. Stay entertained with the latest Bollywood movies like Panga, Tanhaji and more immediately after theatrical release, watch exclusive Hotstar Specials shows in seven languages like the hugely popular Neeraj Pandey’s Special Ops, Out of Love, Criminal Justice, unlimited LIVE sporting action, and STAR serials before TV and much more. Users can now enjoy all this at an affordable price of INR 399/- for a year.

Subscribers of Disney+ Hotstar Premium will receive all the benefits of Disney+ Hotstar VIP, with the addition of access to English language content and 29 critically acclaimed Disney+ Originals, including The Mandalorian from executive producer and writer Jon Favreau; High School Musical: The Musical: The Series, a creative modern take on the hit franchise; and the live-action Lady and the Tramp, a timeless re-telling of the 1955 animated classic; and many more to come; as well as the latest American shows from studios like HBO, Fox, Showtime at the price of INR 1499 for a year.

Will you be trying out Disney+ Hotstar ?