QUACK! QUACK! QUACK! QUACK! A team of misfits overcomes early struggles to make a run at the Pee-Wee hockey title in “The Mighty Ducks.” It’s essentially “The Bad News Bears” on ice. Emilio Estevez plays Gordon Bombay, a hot shot lawyer sentenced to coach a pee-wee hockey team as part of his community service. With the help of his old mentor, Bombay is able to turn the last place District 5 hockey team into the champions.

This movie, and its immediate sequel, were two of my all time favorites growing up. As a kid, I loved hockey movies and I loved kids sports movies, so this film hit me right where I lived. Even though there’s a lot about the movie that doesn’t make sense when you watch it with adult eyes, kids gobble this up. In reality, there’s no way a man arrested for drunk driving would be sentenced to coach a hockey team, but you have to accept that’s what’s happening here.

Despite those flaws, the message is a sound one that we’ve seen before. The players help the coach grow. The coach helps the players grow. They make an improbable run and win the whole thing. Bombay becomes a better person and decides to follow his childhood dream of playing professional hockey by trying out for a minor league team. The team that couldn’t win a game, couldn’t even score the first time Bombay coaches them, finally learns the fundamentals of hockey from the man who was once a great pee-wee hockey player. They sneak into the playoffs and then win it all. It would be completely unbelievable if the St. Louis Blues hadn’t been in last place on Jan 1, 2019 and found a way to win the 2019 Stanley Cup in the NHL. 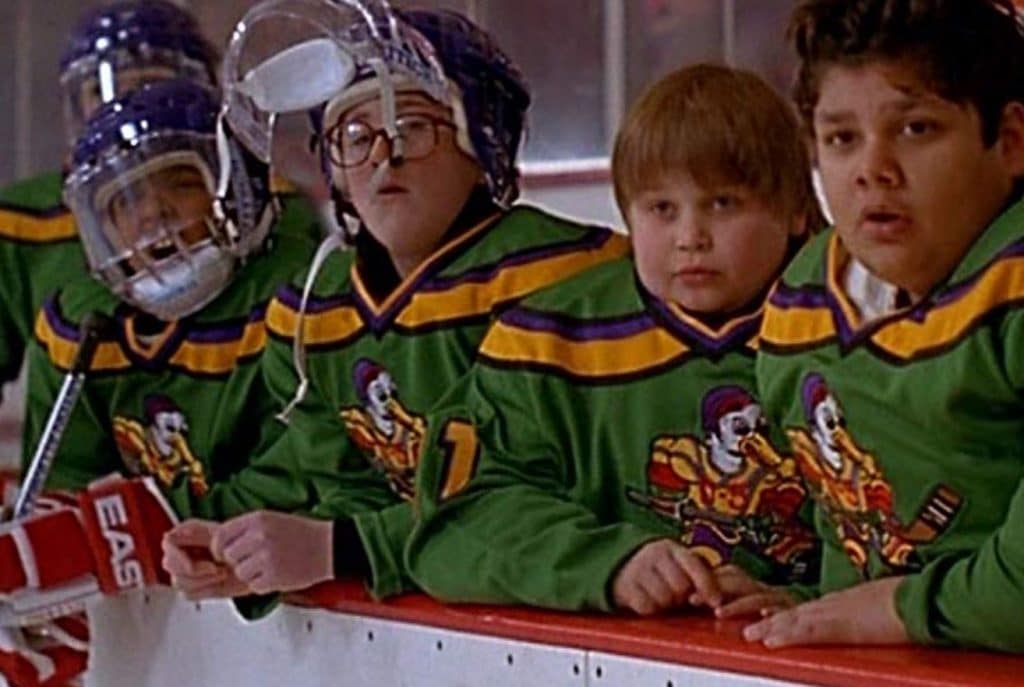 Estevez was the clear star of the movie, but several of the actors have gone on to bigger things. Joshua Jackson, Marguerite Monreau, Elden Henson, Danny Tamberelli and Jussie Smollett all went on to star in TV shows or movies. Meanwhile, Shaun Weiss, Aaron Scwhartz and Brandon Adams all went on to star in other kid-centric movies of the early 90s, like “Heavyweights” and “The Sandlot.”

I love the story of this film, no matter how many times I’ve seen it done. I love the camaraderie the kids had while making it. You can tell most of them were friends and remain friends to this day. When making sports movies, it’s hard to make them believable when they try to teach actors to play sports they’ve never played. But, in a kids movie, it’s very easy to believe this is the talent level these kids are at. That’s why it works. And, some of these kids actually played pee-wee hockey, which adds some realism to their performances.

At one time, this was my favorite movie. As I’ve matured, my tastes have changed, but this is always nice for nostalgia. And, I love quoting every line as I watch this film.

What did you think of “The Mighty Ducks?”

Jeremy has been a big Disney fan since he was a kid growing up during the Disney Renaissance. One day he hopes to go to every Disney Park in the world.
View all posts
Tags: disney, Hockey, review, Sports, the mighty ducks