Disney’s ABC Signature studios have ordered a pilot of a new multi-camera comedy, which is currently going under the working title of “The Untitled Regina Hicks Project”.

This new comedy follows three former sorority sisters who lost touch after college, reunite during a pivotal point in their lives. They realize sometimes it’s okay to crack and when you do, no one will be there for you like your friends.

How To Get Away With Murder actor Viola Davis, along with Julius Tennon and Larry Wilmore are going to be executive producers on the show.

Regina Hicks took to social media to confirm the news: 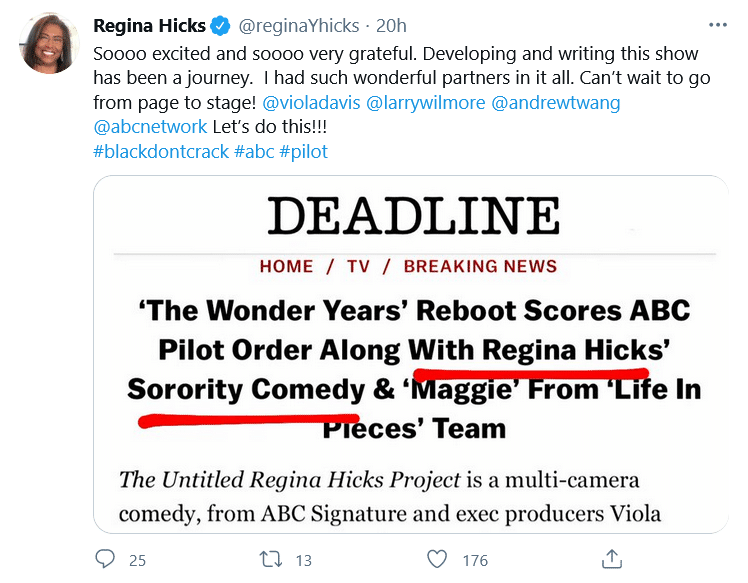 The project has been in development since 2017 and was originally called “Black Don’t Crack”.  It has gone through a few development seasons at ABC to get it right.  Back in 2018, Julius Tennon said the following about the project to Deadline:

“Viola and I are inspired by Regina Hicks and to have Larry Wilmore EP is a dream. Seeing these three African American women who appear not to age but, to have challenges that we can all relate to and in a way, we have not seen before, will be a revelation.”

“I’m thrilled to be a part of this exciting project and to collaborate with the crazy talented, Regina Hicks. BDC is hilarious, heartwarming, and shines a light on women who are hiding in plain sight.”

Regina Hicks signed an overall deal with 20th Century Television in 2018.  She co-producer on the upcoming Disney+ movie “Sister Act 3” and has written a number of projects for Disney including both “Camp Rock” films.

Should this pilot become a series, we can expect to see if eventually arrive on Hulu in the US and on Disney+ as a “Star Original” internationally.