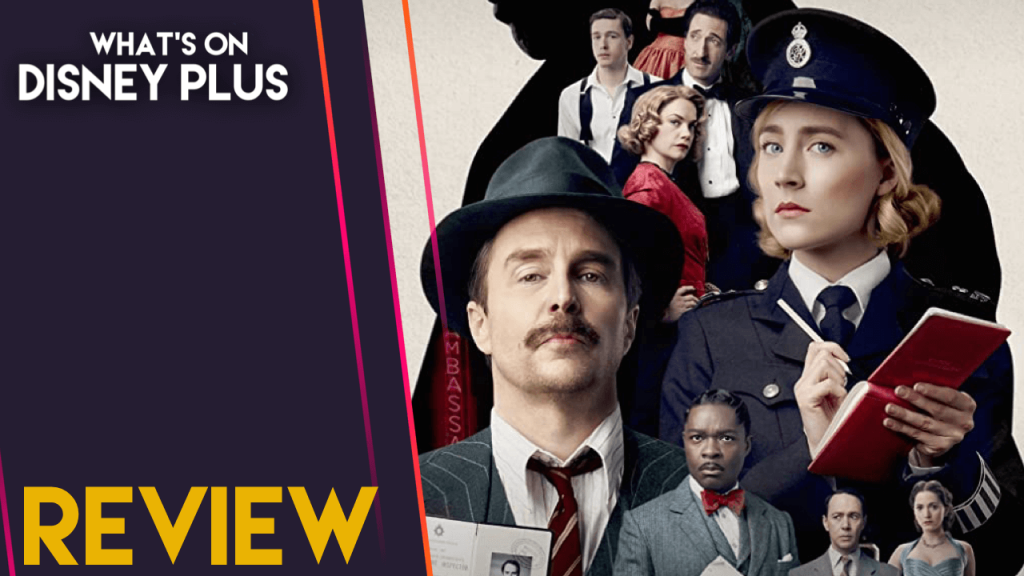 Searchlight Pictures’ latest release is “See How They Run”, which is a British murder mystery set in the West End of London in the 1950s.  The film stars Sam Rockwell as the weary Inspector Stoppard, who has been given a murder case to investigate, with an eager rookie, Constable Stalker, who is played by Saoirse.
Ronan.

An arrogant American director has been killed while celebrating the 100th showing of Agatha Christie’s “The Mousetrap”, setting up a classic murder mystery case, as the two police offers try to work out who committed the murder and, just as important, stop any further murders taking place.  I really don’t want to get too much into the plot or explain what happens, since that’ll give too much away.  You want to go into this film with no information. Ideally, if you like a good murder mystery film, you’ll want to see it as soon as possible, encase it gets spoilt, (even if they tell you not to spoil it for others).

One of the things that really stands out about this film, is how it perfectly captures the traditional British murder mystery genre, but also delivers a fresh take on it.  I’m a big fan of this genre, with modern shows like “Death In Paradise” and the recent Poirot films, which are also made by 20th Century Studios, but this one is far superior.

There are so many moments in this film where I was laughing out loud, and at the preview screening, I was at, the theatre was also laughing along throughout.  One thing that really stands out is Saoirse Ronan’s character, Constable Stalker, who delivers many of the little one-liners and just made this film so charming.  She is the star of this movie.

Another thing I loved about this film was how it is so British, the way it captures our humour and also brings that classic feel of the 1950s to the screens, with a nod to modern audiences.   It’s exceptionally well written and will have you thinking about who might have done it throughout the film.

“See How They Run” is one of the best films I’ve seen this year.  It’s full of charm. It’s full of great comedy. It’s witty and full of surprises.  It’s also got an incredible cast, and honestly, I can’t think of a single thing that I didn’t like about it.   It’s an absolute delight!

Roger has been a Disney fan since he was a kid and this interest has grown over the years. He has visited Disney Parks around the globe and has a vast collection of Disney movies and collectibles. He is the owner of What's On Disney Plus & DisKingdom. Email: Roger@WhatsOnDisneyPlus.com Twitter: Twitter.com/RogPalmerUK Facebook: Facebook.com/rogpalmeruk
View all posts
Tags: review, see how they run