What's On Disney Plus > Blog > Brands > Star Wars > “Rogue One: A Star Wars Story” Returning To Cinemas Ahead Of “Andor” Disney+ Series Launch

Just ahead of the release of the new Star Wars series, “Andor”, Disney is going to be re-releasing “Rogue One: A Star Wars Story” in selected IMAX cinemas in the United States from Friday 26th August 2022.  Plus, there will be an exclusive look at the new Disney+ Star Wars series. 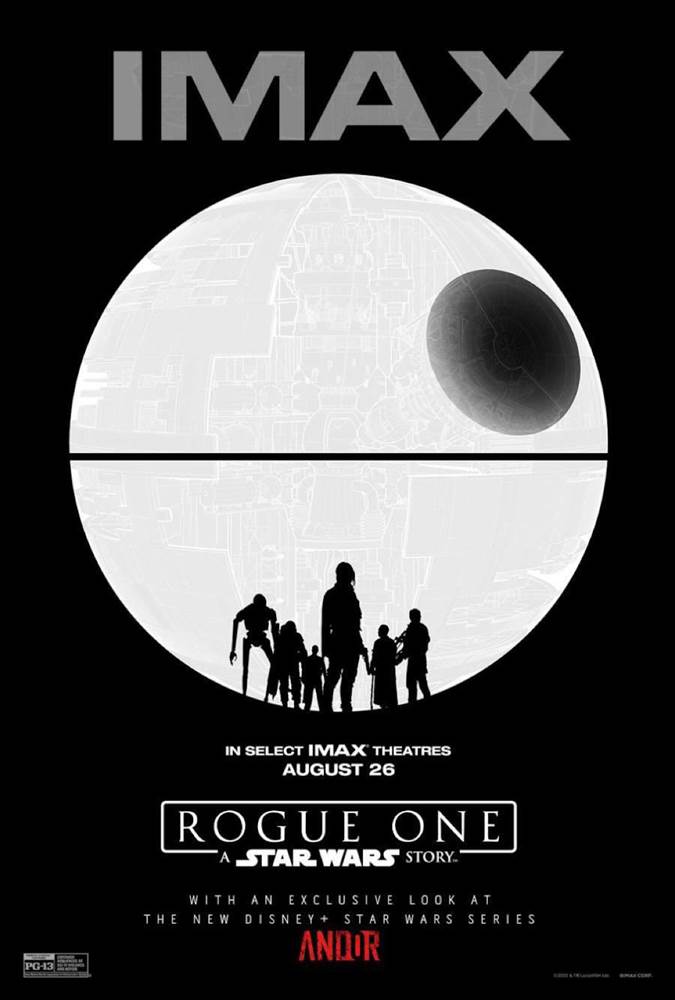 “Rogue One: A Star Wars Story” is set prior to the events of the original Star Wars film,”A New Hope” and takes place in a time of conflict, where a group of unlikely heroes band together on a mission to steal the plans to the Death Star, the Empire’s ultimate weapon of destruction. This key event in the Star Wars timeline brings together ordinary people who choose to do extraordinary things, and in doing so, become part of something greater than themselves.

Tickets for the re-release of “Rogue One: A Star Wars Story” will be available soon via Fandango

The new “Andor” series, which takes place prior to the events of “Rogue One: A Star Wars Story,” is debuting exclusively on Disney+ on Wednesday 21st September 2022, with a three-episode premiere.  The series will consist of 12 episodes, and new episodes will be released every Wednesday after the premiere.

“Andor” explores a new perspective from the Star Wars galaxy, focusing on Cassian Andor’s journey to discover the difference he can make. The series brings forward the tale of the burgeoning rebellion against the Empire and how people and planets became involved. It’s an era filled with danger, deception and intrigue where Cassian will embark on the path that is destined to turn him into a rebel hero.

Of course, if you don’t want to go to the cinema to rewatch “Rogue One: A Star Wars Story”, you can watch it now on Disney+.

Roger has been a Disney fan since he was a kid and this interest has grown over the years. He has visited Disney Parks around the globe and has a vast collection of Disney movies and collectibles. He is the owner of What's On Disney Plus & DisKingdom. Email: Roger@WhatsOnDisneyPlus.com Twitter: Twitter.com/RogPalmerUK Facebook: Facebook.com/rogpalmeruk
View all posts
Tags: andor, rogue one, star wars