National Geographic Documentary Films has announced details on the commercial-free broadcast premiere of Rebuilding Paradise, from director Ron Howard and Imagine Documentaries on National Geographic, Sunday, November 8th at 9/8c, the second anniversary of the Camp Fire in Paradise, California.   No Disney+ release details have yet been announced.

Additionally, the banner has committed a portion of all sales and rentals of the documentary during the month of October, Fire Prevention Month, to wildfire recovery efforts in Paradise and the surrounding areas. 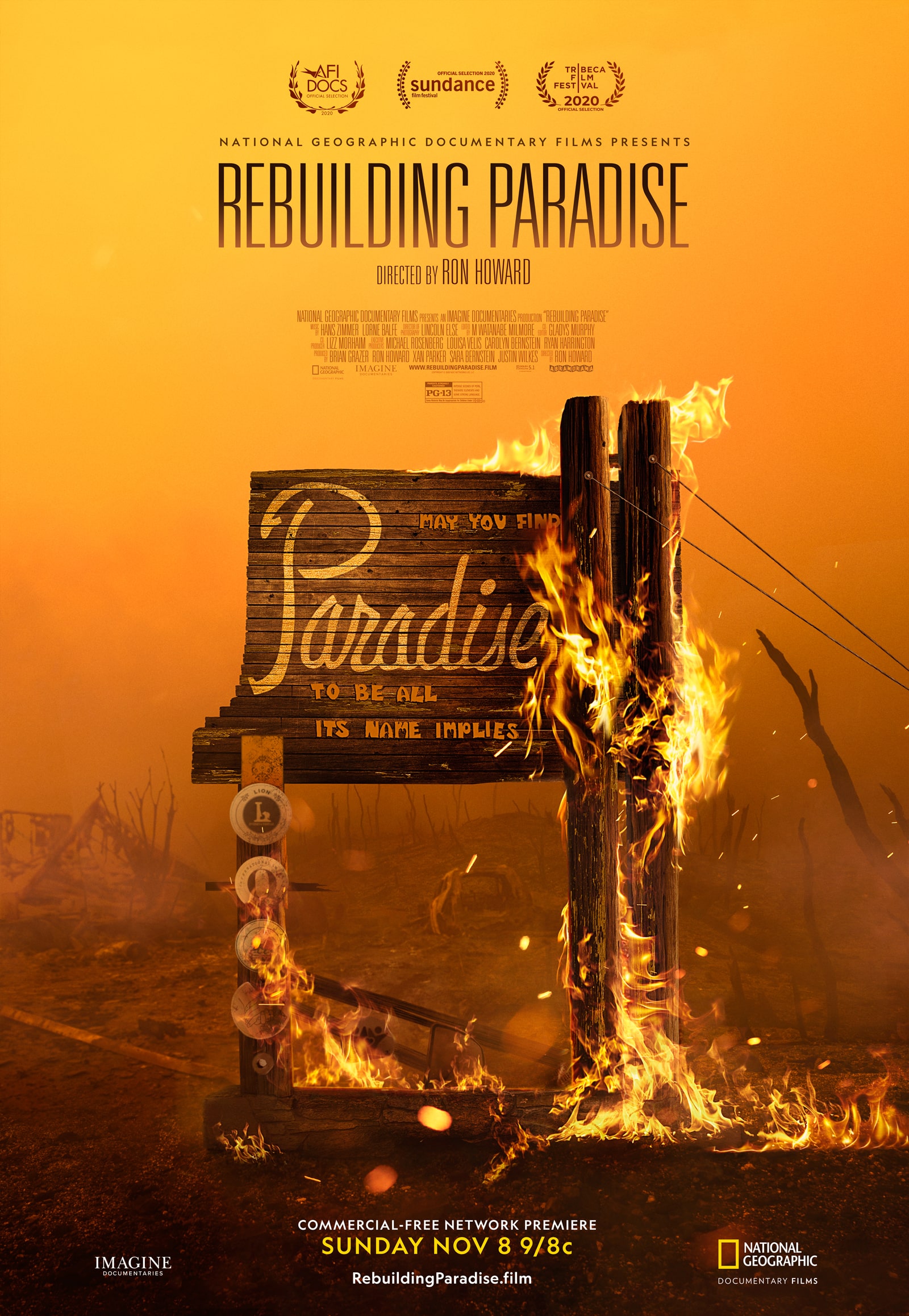 In honor of the release of Rebuilding Paradise and in support of those who continue to be affected by the current wildfires across the west coast, National Geographic Documentary Films will donate one dollar of each sale or rental of the film from Oct. 1-31, National Fire Prevention Month, to California Community Foundation’s Wildfire Relief Fund in support of the Butte Strong Fund (up to $50,000)**.

The documentary is currently available via the Apple TV app, Amazon Prime Video, GooglePlay, Vudu, Comcast and other digital platforms. National Geographic donated an additional $25,000 to the same organization to mark the theatrical release in July, providing direct support to the citizens of Paradise and the surrounding areas through Butte County’s long-term wildfire recovery initiatives. Butte Strong Fund is focused on long-term rebuilding and funds projects and organizations within five focus areas: housing, health and wellness, education, community development and business recovery.

Rebuilding Paradise, which has been hailed by critics as, having “a special timeliness that resonates with the moment,” first premiered at the Sundance Film Festival in January, had a virtual premiere on July 12 attended by more than 6,000 people, followed by a very successful virtual and physical theater release which launched July 31 and has since played in over 125 markets. The film screened on opening night of the IFI Documentary Film Festival in Ireland on Sept. 21 before debuting in theaters around the U.K. on Sept. 25. Britain’s Mail on Sunday proclaimed, “Ron Howard’s meticulously assembled documentary couldn’t be more topical or more powerful”.

In conjunction with Fire Prevention Month, National Geographic Documentary Films is also launching an educational campaign which will provide Rebuilding Paradise to educators and classrooms through a virtual screening event on Oct. 6. The program will address current wildfires that are threatening the safety and livelihood of many of the same communities featured in the film, while honoring first responders. Educators will be armed with resources for fire prevention and preparedness programs for the home and beyond, including preparedness kits, discussion and activity guides and tips from key experts. Additional screenings will be available upon educator requests. For more information about the power and science behind wildfires visit National Geographic’s Resource Library.

“We at Imagine Documentaries are thankful to our partners at National Geographic Documentary films for the continued effort to share this very important and timely film with a wider audience,” said director Ron Howard. “There is no doubt that climate change is a contributing factor to the historic fires burning even now on the west coast, devastating entire communities. This should be a wake-up call – Paradise could be any of us.”

“We are proud to continue to share the timely and urgent story of Paradise with viewers around the world,” said Carolyn Bernstein, executive vice president, Global Scripted Content and Documentary Films at National Geographic. “We hope this film and our impact efforts can bring much-needed attention and aid to the resilient community of Paradise and surrounding areas as they rebuild, especially now, in the face of additional threats from wildfire disasters.”

On the morning of Nov. 8, 2018, a devastating firestorm engulfed the picturesque city of Paradise, California. By the time the Camp Fire was extinguished, it had killed 85 people, displaced 50,000 residents and destroyed 95% of local structures. It was the deadliest U.S. fire in 100 years — and the worst ever in California’s history. Rebuilding Paradise, from director RON HOWARD, is a moving story of resilience in the face of tragedy as a community ravaged by disaster comes together to recover what was lost and begins the important task of reimagining and reembracing their future.

Roger has been a Disney fan since he was a kid and this interest has grown over the years. He has visited Disney Parks around the globe and has a vast collection of Disney movies and collectibles. He is the owner of What's On Disney Plus & DisKingdom. Email: Roger@WhatsOnDisneyPlus.com Twitter: Twitter.com/RogPalmerUK Facebook: Facebook.com/rogpalmeruk
View all posts
Tags: national geographic, rebuidling paradise