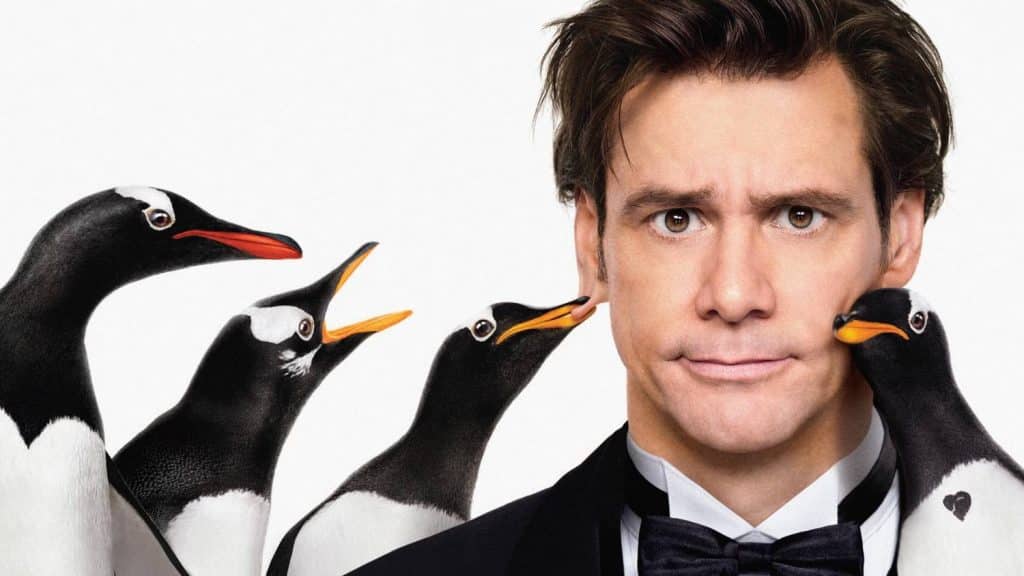 This film was released in 2011 and stars Jim Carrey as Mr Popper, who inherits six penguins, and they soon turn his apartment, and his life, upside down.

The whole family will be full of laughs watching Mr. Popper, a driven businessman who is clueless when it comes to the important things in life until he inherits six, “adorable” and mischievous penguins.

As Mr. Popper quickly gets acquainted with – and increasingly attached to – his winged roommates, his life quickly unravels: the deal he’s long been working on with a formidable socialiate, Mrs. Van Gundy, played by the acclaimed Angela Lansbury (Murder She Wrote, Beauty and the Beast), is derailed and Popper almost lands in jail. While Popper’s penguins turn his swank New York apartment into a snowy winter wonderland – they teach him valuable lessons about family- human and otherwise!

MR. POPPER’S PENGUINS is based on a novel, originally published in 1938, written by the husband and wife team of Richard and Florence Atwater. Awarded the Newbery Medal in 1939, Mr. Popper’s Penguins became a classic through generations, and is a staple on elementary school shelves to this day.

This movie was directed by Mark Waters who previously directed Freaky Friday and Mean Girls, and the Disney+ Original movie, Magic Camp.

Expect this movie to be added to Disney+ in other countries at a later date, though existing streaming contracts will come into play as to when it can be added.

Are you looking forward to seeing Mr Popper’s Penguins on Disney+ in Canada?

Roger has been a Disney fan since he was a kid and this interest has grown over the years. He has visited Disney Parks around the globe and has a vast collection of Disney movies and collectibles. He is the owner of What's On Disney Plus & DisKingdom. Email: Roger@WhatsOnDisneyPlus.com Twitter: Twitter.com/RogPalmerUK Facebook: Facebook.com/rogpalmeruk
View all posts
Tags: canada, mr poppers penguins