A few weeks ago, Disney’s official website in the UK revealed that “Zenimation” would be coming to Disney+ on May 22nd, however there was no details on the series and it was quickly removed from the website.

But the series has dropped onto Disney+ today around the world and the official description says: 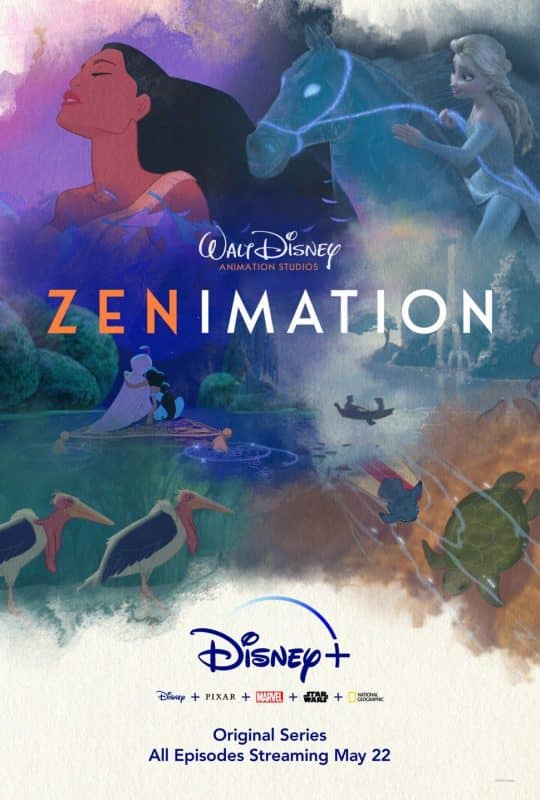 The series consists of 10 episodes, each about 7 minutes long and is available now on Disney+.

Water
Explore the sea with Moana, Ariel and Elsa.

Discovery
Discover the world around you with Elsa, Tarzan, and Rapunzel.

Flight
Fly with Aladdin and Jasmine, Baymax and Hiro, & Cody and Marahuté.

Night
Gaze at the night sky with Tiana, Rapunzel, and Jim Hawkins.

Nature
Take in the beauty of nature with Simba, Pocahontas, and Tarzan.

Serenity
Have a moment of calm with Belle, Mulan and Gramma Tala.

Water Realms
Surf with Lilo, cross the Dark Sea with Elsa, & restore the heart of Te Fiti with Moana.

Levity
Have a laugh with Flash the Sloth, Stitch and Baymax.

Are you you going to watch Zenimation?

Roger has been a Disney fan since he was a kid and this interest has grown over the years. He has visited Disney Parks around the globe and has a vast collection of Disney movies and collectibles. He is the owner of What's On Disney Plus & DisKingdom. Email: Roger@WhatsOnDisneyPlus.com Twitter: Twitter.com/RogPalmerUK Facebook: Facebook.com/rogpalmeruk
View all posts
Tags: disney, Zenimation