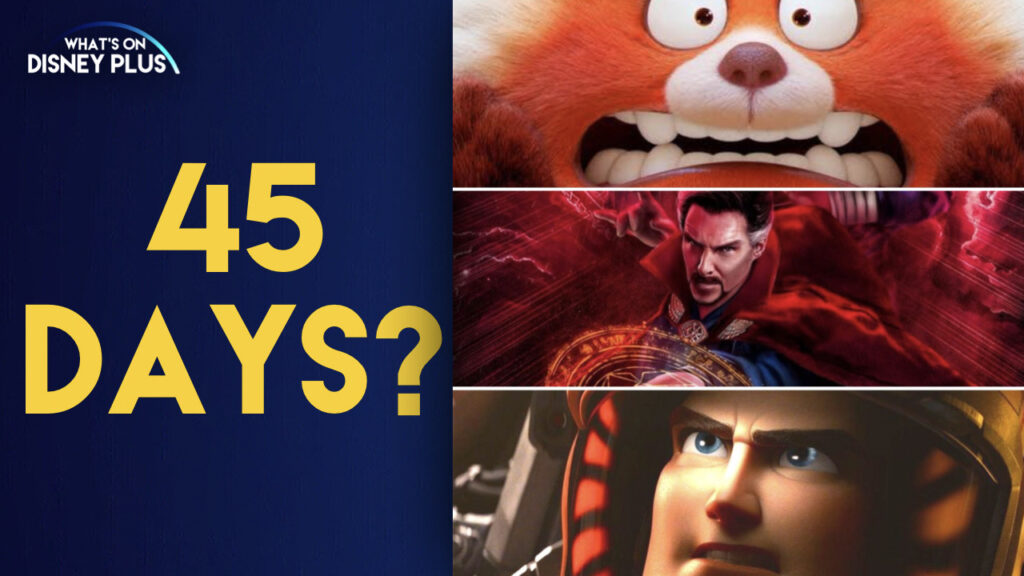 Earlier this year, following the release of “Jungle Cruise”, Disney announced that it would be releasing its films exclusively in theatres for 45 days before being released on digital platforms, including Disney+.

The first two movies released using this model were “Free Guy” and “Shang-Chi And The Legend Of The Ten Rings”, both of which were big box office hits.  Disney then announced in September, the rest of its 2021 theatrical slate would follow the same plan.  However, “Encanto” was given a special 30-day theatrical release window, so that it would arrive on Disney+ on Christmas Eve.

Disney hasn’t yet confirmed if it will be continuing the 45-day theatrical release window throughout 2022.

In October, WarnerMedia announced that it would follow Disney with a 45-day theatrical release window for its 2022 slate.  In 2021, HBO Max was getting movies on the same day as they were released in theatres.    Disney also recently announced an adjustment to the final year of a 10-year deal that 20th Century Studios had with HBO Max, where they would share a select number of titles in 2022, in order to get them released on Disney+ or Hulu within 45-days.

Then in November, Viacom joined the 45-day theatrical release window club, by announcing all of its Paramount films will also be heading to Paramount+ after 45 days. However, it will mix in shorter windows for select titles and continue day-and-date for family films during the pandemic.

Universal made a slightly different deal, with a shorter exclusive theatrical release window of just 17 days before being released as Premium Video On Demand.  But today, the pressure continues to build as NBC Comcast has announced that Peacock will be following Disney with a 45-day theatrical release window for its 2022 theatrical slate.  However, “Jurassic World “, “Minions” and Christopher Nolan’s 2023 film, aren’t expected to be part of the 45-day deal.

“As we continue investing in the most valued and sought-after content for Peacock, films are essential to that mix. The team at Universal Filmed Entertainment Group are fantastic partners and we are excited to bring their amazing slate of blockbuster films and beloved franchises to Peacock as early as 45 days after their theatrical release, and provide a steady stream of fresh, original films exclusively for Peacock customers throughout the year.”

“Prioritizing the theatrical experience and eventizing our world class content remains the cornerstone of our business  By ensuring our upcoming slate has both a theatrical window and timely Peacock debut, we satisfy the needs and expectations for key stakeholders across the spectrum, from our filmmakers and producing partners, to cinemagoers and Peacock subscribers.”

With HBO Max, Paramount+ and Peacock all committing to a 45-day theatrical release window for its 2022 slate.  It wouldn’t be a huge surprise to see Disney continue with what’s been working over the past few months.  It gives cinemas a chance to get people in over six weeks, which is where the majority of box office money is drawn in.  But more importantly, a 45-day theatrical release window gives each movie a boost, both financially and makes each film seem more valuable, as the majority of people would still view these new movies are brand new.

Plus, more importantly, it means Disney+ would continue to get a constant flow of high-quality new movies dropping throughout the year.

While Disney+ Premier Access was used for a number of releases in 2021, it’s unlikely that it would continue, as piracy increased and box office numbers were drastically less.

Do you think Disney will continue with the 45-day theatrical release window through 2022?