Erik Killmonger saves Tony Stark’s life preventing the rise of Iron Man in the latest episode of the Disney+ Original series “What If…?” from Marvel Studios. In this episode, Killmonger saves Tony from the weapon that damaged his heart in Afghanistan and prevents him from being captured. In turn, that means there is no longer any Iron Man or War Machine and Killmonger finds a new way to take up the mantle of Black Panther.

This is one of the more intriguing episodes of this series. It’s always interesting to see how changing one event could lead to completely different circumstances. The episode shows that without Tony Stark as Iron Man; Stark, Rhodes and T’Challa will all die at Killmonger’s hands; Obadiah Stane will be arrested without ever becoming Iron Monger, the Winter Solider will never kill T’Chaka and the United States ends up at war with Wakanda. Killmonger is one of the best villains because his motivations are completely understandable. And, while he’s a well trained soldier, he’s still just a man which makes his success far more impressive than Thanos, Loki or Ultron.

It’s always great to see who returns to voice these characters. In this episode, the two most important are Michael B. Jordan and Chadwick Boseman. Following Boseman’s untimely passing, all Marvel fans; and especially Black Panther fans; will enjoy all the last opportunities to hear new work from Boseman. We will miss him greatly, but every time we get to hear his voice again reminds us of his immense talent. Meanwhile, you can’t have Killmonger with Michael B. Jordan. He embodies this role perfectly. And, we need his voice to return for us to want to care more about the character here. For this episode to be a success, Jordan was a necessity. 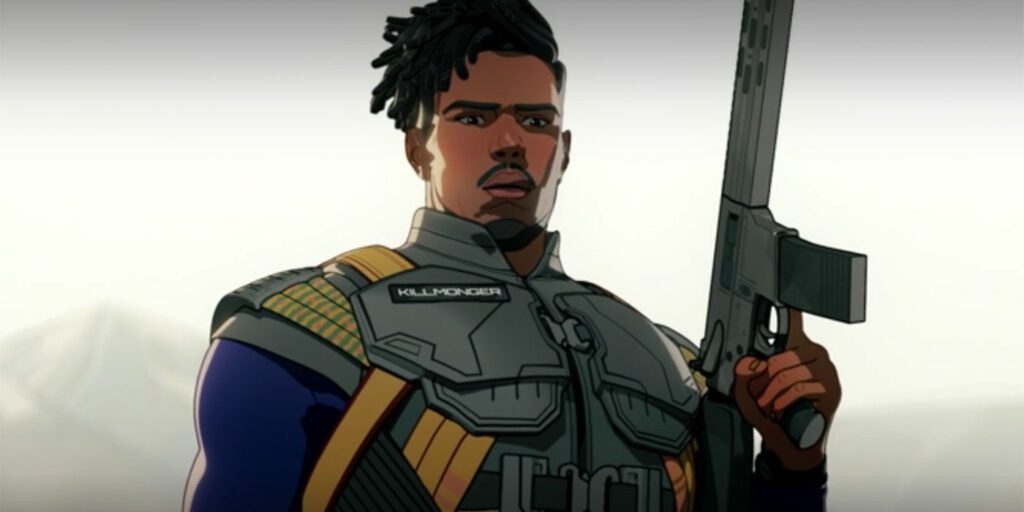 It’s a bit disappointing we couldn’t get some of the others to return for this series. It’s okay for someone else to voice Tony Stark, because we’ve heard him voiced by another actor in several animated tv shows and animated movies. I would’ve liked Jeff Bridges or Gwyneth Paltrow to return to voice Obadiah Stane or Pepper Potts, but they are big stars who are in high demand, so I get them not returning. The one I would’ve liked most is Letitia Wright as Shuri. We know she’s filming “Black Panther 2” right now, so she’s still working with Marvel. She may have been busy at the time of recording, but since they were able to get Boseman in to record his lines while working on other films, it would’ve been nice to get her too.

This is another great episode in what has been a great series, so far. It comes up with some unique concepts that I never would’ve considered. I never put Erik Killmonger and Tony Stark in the same sentence before seeing this episode. Now, I want to see a live action version of this episode. I think it would be really cool. I can’t wait to see more going forward.

What did you think of this episode of “What If…?”

Jeremy has been a big Disney fan since he was a kid growing up during the Disney Renaissance. One day he hopes to go to every Disney Park in the world.
View all posts
Tags: black panther, disney, Disney+ Original Series, Erik Killmonger, iron man, Marvel, review, war machine, what if