Mickey tries to spice up the weekly game night but it leads to a very dangerous situation for Minnie, Donald, Daisy and Goofy in “Game Night” the latest episode of “The Wonderful World of Mickey Mouse.” As five of the sensational six try to make their way through a giant Candyland board that mixes in many other games, the board starts fighting back by trying to hit our heroes with pie. In the end, Donald sacrifices himself so Mickey can win the game and then Donald gets a chance to make Mickey pay with his very own pie.

This episode continues a recent trend of this series bringing very enjoyable shorts. We get to see Mickey’s friends back and, I believe, this is our first glimpse of Daisy in nearly 10 episodes. Plus, the game board brings the perfect mixture of fun and danger for this series. Mickey and his friends aren’t really going to be hurt, but it does well enough to make you believe they could be hurt. And, we get to see Mickey, Minnie, Donald, Daisy and Goofy having fun. They are really enjoying themselves until the game board turns on them. Donald also proves he can be the hero of the group when he throws himself in the path of the flying pies so Mickey could cross the finish line. 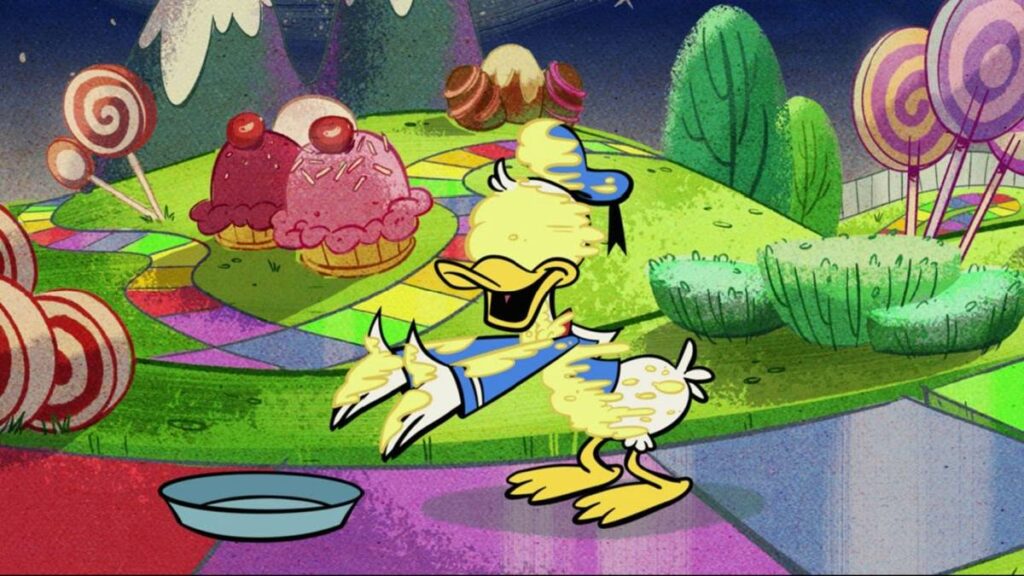 I’ve been critical of some of the shorts during this run of episodes, but I really enjoyed the last three. All-in-all, I liked 7 out of the last 1o episodes of this series. I think it’s got potential and I’m excited to see another full season if Disney decides to renew it. I think they did a good job overall of making Mickey fun for the whole family. I want to see more shorts at this series has been more hits than misses so far.

Jeremy has been a big Disney fan since he was a kid growing up during the Disney Renaissance. One day he hopes to go to every Disney Park in the world.
View all posts
Tags: “The Wonderful World of Mickey Mouse”, disney, Disney+ Original, Game Night, review