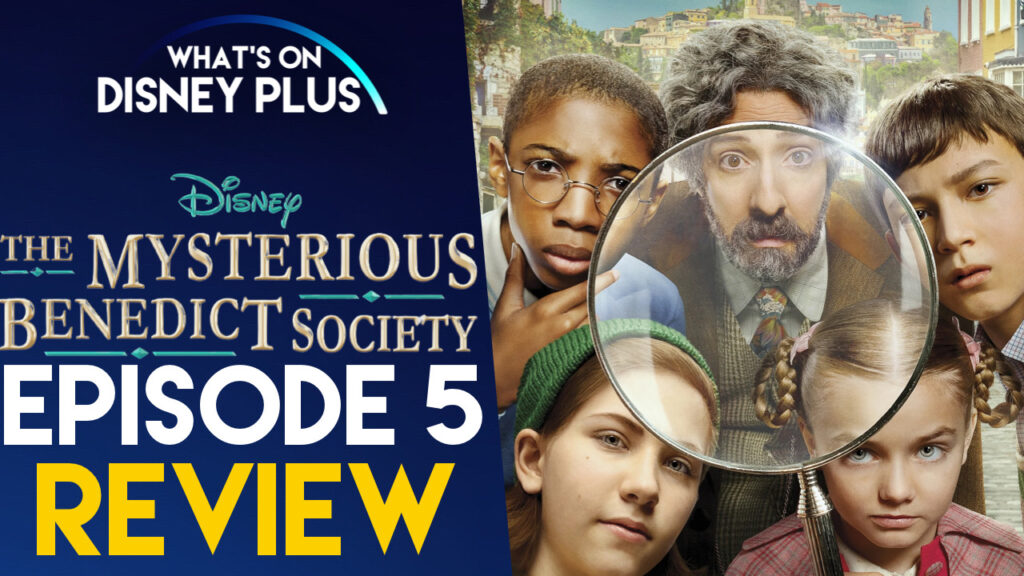 So far in this season, we’ve seen Mr Benedict put together a team of eccentric adults and kids, to head off to the mysterious L.I.V.E. Institute, where a subliminal signal is being broadcast around the world, causing panic and chaos, aka “The Emergency”.

“The Mysterious Benedict Society” is perhaps one of the quirkiest Disney+ Original series we’ve seen so far and as we head into the second half of this season, in the fifth episode, we finally start to find out what’s actually going on.

Following last weeks focus on the adult characters, this week’s episode shifts back to the children, who are each having to deal with issues on the island. Reynie & Sticky head off on their own adventure after becoming “Messenger’s”, while Kate has to deal with her own struggles in becoming part of the Tetherball team, and Constance is hearing more voices, leading her to a shocking discovery.

After lots of teases and hints, we finally learn how Dr Curtain is using his messenger’s own insecurities, by sending their thoughts across the airwaves. Slowly influencing people’s thoughts and making them feel uneasy.

“The Mysterious Benedict Society” got off to a strong start, but the last couple of episodes have dragged as suspense has been building about what exactly is going on. This episode pushes forward and starts answering some of the questions and more importantly, pushing the story into the next phase, with a little more excitement and suspense.

I’ve been enjoying the show so far, its quirky style and unique story, set this show apart from other Disney+ Originals. This episode, is a vast improvement over the past couple of episodes, as they’ve felt a little bit like a filler to stretch the series to 8 episodes. While building suspense and character progression is important, it took a little longer to get there than we would see in your usual Disney show.

Episode 5 is one of the best episodes since the show debuted and have got me excited to see where the show heads. We’ve finally started to see the darker side of Dr Curtain and how his evil plan is coming together.

Episode 5 of “The Mysterious Benedict Society” is coming to Disney+ on Friday 16th July.