This past Friday, the Walt Disney World Resort celebrated its 50th Anniversary and ABC has released a spectacular television event, “The Most Magical Story on Earth: 50 Years of Walt Disney World,” which takes viewers on a historical journey spanning half a century and beyond at Walt Disney World in Florida. Hosted by Disney Legend and moderator of ABC’s “The View,” Whoopi Goldberg, the two-hour program will feature spectacular visuals and musical performances from Christina Aguilera and Disney’s “The Little Mermaid” Halle Bailey in front of the legendary Cinderella Castle at Magic Kingdom Park, accompanied by the renowned Orlando Philharmonic Orchestra; as well as interviews with iconic actors, actresses and athletes, Walt Disney World cast members, Disney Imagineers and executives past and present, who have all played their unique part in sprinkling pixie dust over “The Most Magical Place on Earth.”

The special aired on ABC in the United States on Friday 1st October and was available the following day on Hulu.

Disney has also now officially confirmed via social media that this 2 hour special will be available on Disney+ on Friday 8th October. 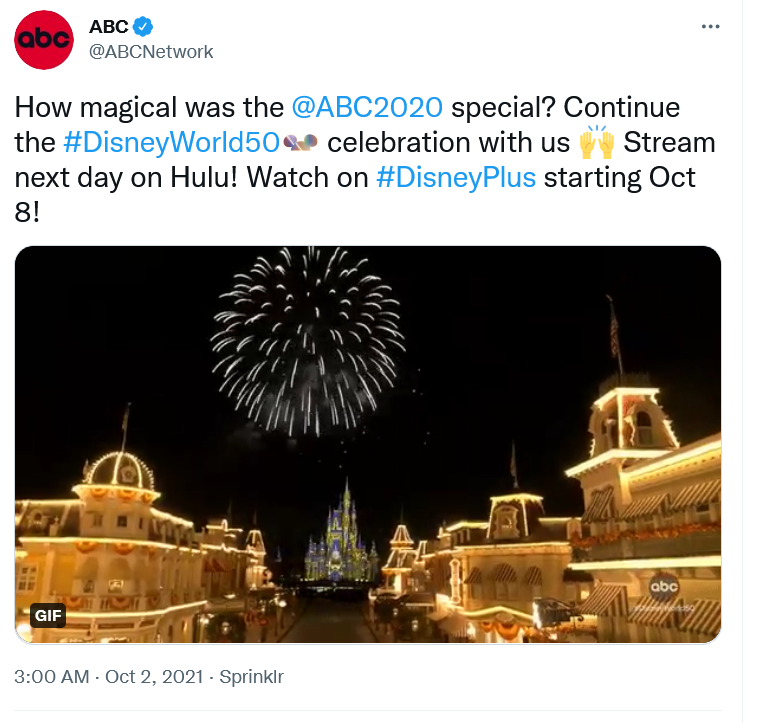 This EARidescent special event will take viewers through Walt Disney World’s humble beginnings in the swamplands of Florida and its evolution into a cultural phenomenon. Through an expansive look into the past, present and future of the vacation destination, fans will get a never-before-seen-on-TV glimpse into the journey to bring Walt’s vision to life and a look at grand plans for the future. The special will also document some of Walt Disney World’s most memorable pop-culture moments, from the many sitcoms that filmed episodes in the theme parks to the conception of the ubiquitous “I’m going to Disney World!” campaign. Plus, viewers will get a heartwarming look at how Disney and Make-A-Wish foundation have worked together for over 40 years to make kids’ Disney dreams come true.

Currently, the release of this special has been only confirmed for a Disney+ release in the United States, but I’d expect it to be available everywhere, much like previous Disney Theme Parks specials.

Are you looking forward to this new Walt Disney World celebration?

Roger has been a Disney fan since he was a kid and this interest has grown over the years. He has visited Disney Parks around the globe and has a vast collection of Disney movies and collectibles. He is the owner of What's On Disney Plus & DisKingdom. Email: Roger@WhatsOnDisneyPlus.com Twitter: Twitter.com/RogPalmerUK Facebook: Facebook.com/rogpalmeruk
View all posts
Tags: walt disney world