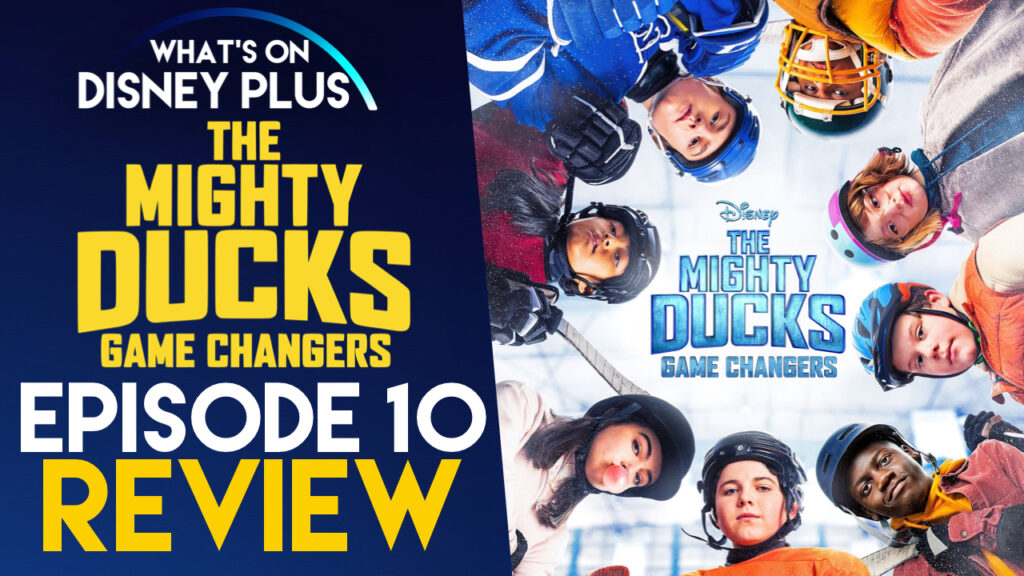 The finale of the Disney+ Original series “The Mighty Ducks: Game Changers” hits Disney+ this Friday and sees the “Don’t Bothers” head to the state finals to compete in a tournament to be crowned state champions.

After 10 weeks of building, the series hits the final stretch and considering the speed the pacing of previous episodes, don’t expect this episode to hold back.

There are many questions you might have going into this season finale.  Can this ragtag team of misfits come together and win the championship?  Will they overcome the odds and beat the big bad Mighty Ducks?  Will Bombay and Alex finally get together?

You’ll have to wait until Friday to find out, as I don’t want to spoil too much about this episode, so I’ll be keeping it vague.

After last weeks episode, I felt I pretty much could guess at what happens in the final, especially as the show was flying through as many sports cliches as it possibly could.   Thankfully, the writers did pull a few little swerves to make the episode a little more interesting, but ultimately, this episode ends on a positive note.    The finale does potentially open up the show for a second season, but if this was all we got, I think it leaves all the characters in a good place, which isn’t a bad thing.

Overall, “The Mighty Ducks: Game Changers” has been a series with some great moments, but generally suffers from pacing issues, and this final episode is pretty similar, as the episode races through the storylines, without taking any time for the viewer to soak in what’s happening.  Conflicts are resolved in minutes, and I feel like we’ve rushed through 2 seasons or a full traditional TV season within these 10 episodes.

Ultimately, the finale finishes on a strong positive note, and there are some fun moments that made this episode enjoyable.  This was a much stronger episode than the past couple, but it’s such a shame that the storylines weren’t given longer to develop, but the series has delivered exactly what it said it would.  It’s just more of the Mighty Ducks for a new generation, with a few nods to the old films.  There isn’t anything wrong with that, and this episode was perfectly fine, if a little predictable.

The final episode of the first season of “The Mighty Ducks: Game Changers” is coming to Disney+ on Friday 28th May.