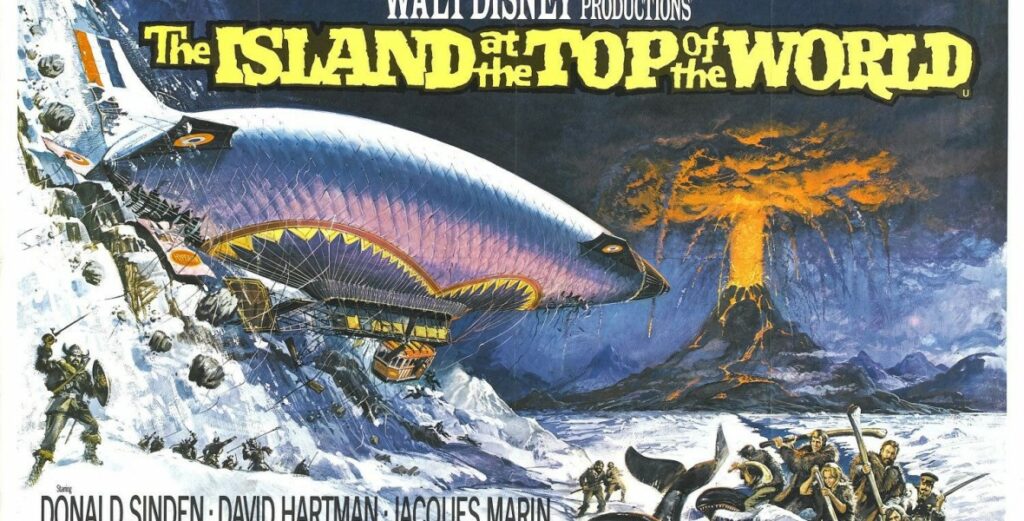 Disney has announced that the 1974 live-action classic film “The Island at the Top of the World” is coming to Disney+ in the United States and Canada on Friday 2nd April.

Island at the Top of the World, The (film) In 1907, a wealthy Englishman, Sir Anthony, commands a giant airship as it searches the Arctic for his missing son. The only clues they have are a page from an old Hudson’s Bay Company journal mentioning a hidden island “far beyond land’s end where the whales go to die, ” and a curious map of carved whalebone. The crew discover a volcanic Nordic island, a fabled whales’ graveyard, and encounter Viking warriors who are far from friendly. Sir Anthony is reunited with his son Donald whose sweetheart, Freyja, helps them escape a death decree. Recaptured after a battle with killer whales, the fugitives are finally given their freedom in exchange for an American professor remaining behind as hostage.

It’s based on The Lost Ones by Ian Cameron and has music that is composed by Maurice Jarre and spectacular special effects by Peter Ellenshaw, Art Cruickshank and Danny Lee, this lavish film was filmed on locations spanning the Arctic Circle from Alaska to Greenland to Norway.

The large budget allowed the creation of the airship Hyperion, a 220-foot motor-driven tapered dirigible; a complete Viking village with a temple of lava rock; 850 feet of coconut-fibre rope, handmade in Egypt, to hold up a suspension bridge; and a Viking longship to be used on location in Balestrand, Norway.

The film was not a box office success, but was nominated for an Academy Award for Art Direction/Set Direction by Peter Ellenshaw, John B. Mansbridge, Walter Tyler, Al Roelofs, and Hal Gausman. Disney released the film on video in 1983 and 1994.

Are you looking forward to “The Island at the Top of the World” arriving on Disney+?

Roger has been a Disney fan since he was a kid and this interest has grown over the years. He has visited Disney Parks around the globe and has a vast collection of Disney movies and collectibles. He is the owner of What's On Disney Plus & DisKingdom. Email: Roger@WhatsOnDisneyPlus.com Twitter: Twitter.com/RogPalmerUK Facebook: Facebook.com/rogpalmeruk
View all posts
Tags: "The Island at the Top of the World"