Disney has announced that subscribers in the United States are set to get another batch of six new episodes of the second season of “Dino Ranch” on Wednesday, 25th January 2023. “Dino Ranch” introduces young audiences to the ultimate playground – a working farm and dinosaur sanctuary – and the tight-knit Cassidy family: Ma (Jane), […]

The the action-packed “pre-westoric” preschool series “Dino Ranch” is going to be returning to Disney Jr and Disney+ with a second season later this year and a brand new trailer has been released. “Dino Ranch” is saddling up for Season 2 and is currently ranked as the #1 preschool show during the 7PM time slot. […]

Disney+ subscribers in the United States are set to get another batch of new episodes of “Dino Ranch” on Wednesday 27th April 2022. The action-packed prehistoric preschool series premiered on Disney Jr. last year and this latest batch of episodes being added onto Disney+ will mean that the entire first season of 26 episodes is […]

The new pre-school animated series “Dino Ranch” will be coming soon to Disney+ in Australia, New Zealand and the United Kingdom in April. The animated series, produced by Industrial Brothers and Boat Rocker Studios, follows the Cassidy family as they tackle life in a fantastical, “pre-westoric” setting where dinosaurs roam. Dino Ranch – the ultimate […]

Recently a new brand new animated series aimed at preschool children, called “Dino Ranch” were released on Disney Junior and in DisneyNOW.  The animated series, produced by Industrial Brothers and Boat Rocker Studios, follows the Cassidy family as they tackle life in a fantastical, “pre-westoric” setting where dinosaurs roam. As the young explorers learn the […] 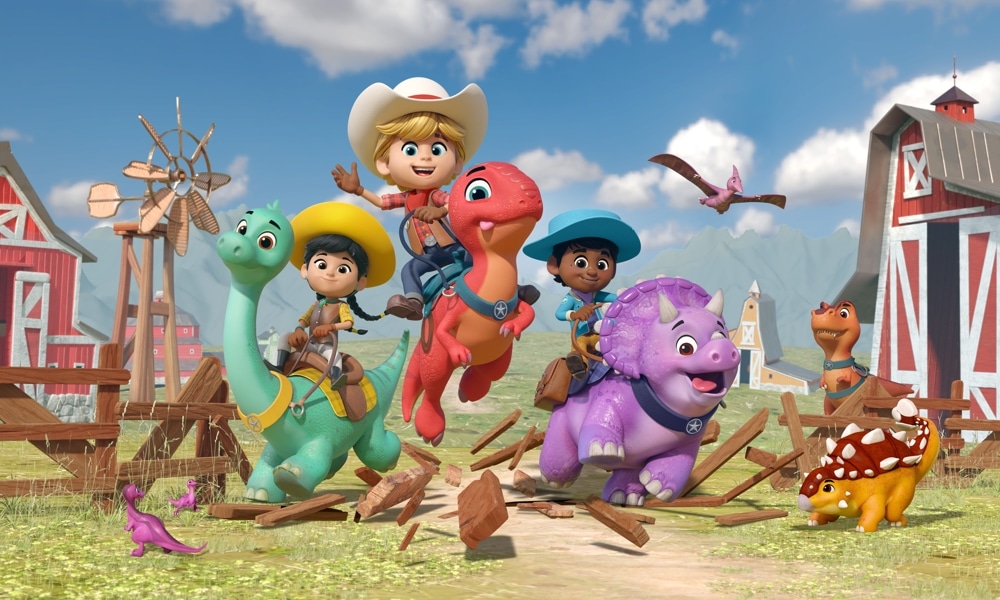 Disney has released a trailer for the newest Disney Junior animated series, “Dino Ranch”.  The series will debut on Disney Junior on Monday 18th January. The series will consist of 52 episodes, that are 11 minutes each and Dino Ranch follows the action-packed adventures of the Cassidy family as they tackle life in a fantastical […]