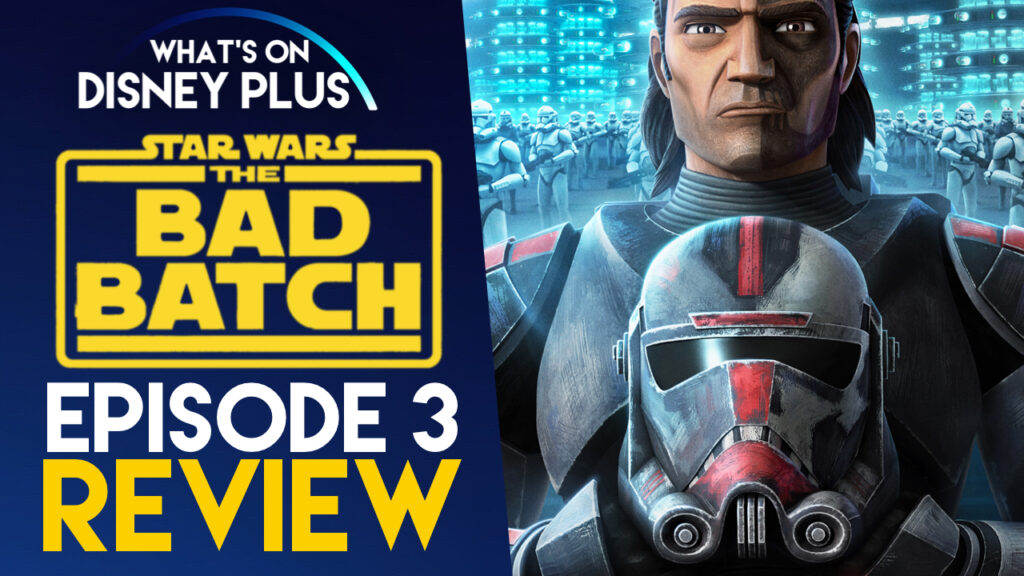 The third episode of “Star Wars: The Bad Batch” has just arrived on Disney+ and sees the team crash land on a hostile planet, where they need to repair their ship, but something is lurking in the shadows.

Two key plots are going on within this episode. One focuses on the Bad Batch crew and their relationship with Omega, especially Hunter and Wrecker, who are struggling with the realities of looking after a child.

As with previous episodes, Hunter is the main member of the Bad Batch to be evolving in every episode, with his leadership, mentor and father role coming into sharper focus. In comparison, Wrecker slides more into that big brother vibe.  With Tech and Echo just hanging around fixing things.  It’s a shame those characters aren’t getting much attention, but I’m hoping at some point, they will start showcasing the difference between the two of them, because as of right now, they are very dull characters.

After being missing from the previous episode, a good portion of this episode is spent developing his role within the Galatic Empire.  He comes across as cool, calm and very collected.  He is right now the perfect soldier, who does exactly what is asked of him, with no questions asked.

There is a brutal scene involving Crosshair confronting the Rebels, where he shows no mercy.  They don’t show it, but the sound and screams will undoubtedly have a much bigger impact on those older viewers.  It’s pretty shocking and really put over how his inhibitor chip is in full control.

I loved how we got to see so much more of the crossover period between using Clones and recruits.  We’ve had the odd throwaway line about why the Empire stopped using Clones, but this series looks to be digging into that aspect much more.   Ever since the Prequel trilogy was released, there have been many questions about why this, and it’s nice that this show is spending time right after the events of “Revenge Of The Sith”.

The Bad Batch team is growing on me, even if they feel more like the perfect squad in a video, with a leader, a brute, a tech, and a healer.   It’s the Empire side of the show that has caught my attention, especially with Admiral Tarkin and Crosshair.  The villains are just so much more interesting.

Overall, episode 3 is a solid episode. It’s filling in the gaps nicely, but it’s still very much in the early stages of setting the characters up and no doubt.  It’s not perfect, but I’m enjoying the series so far and can’t wait to see where it’s going.