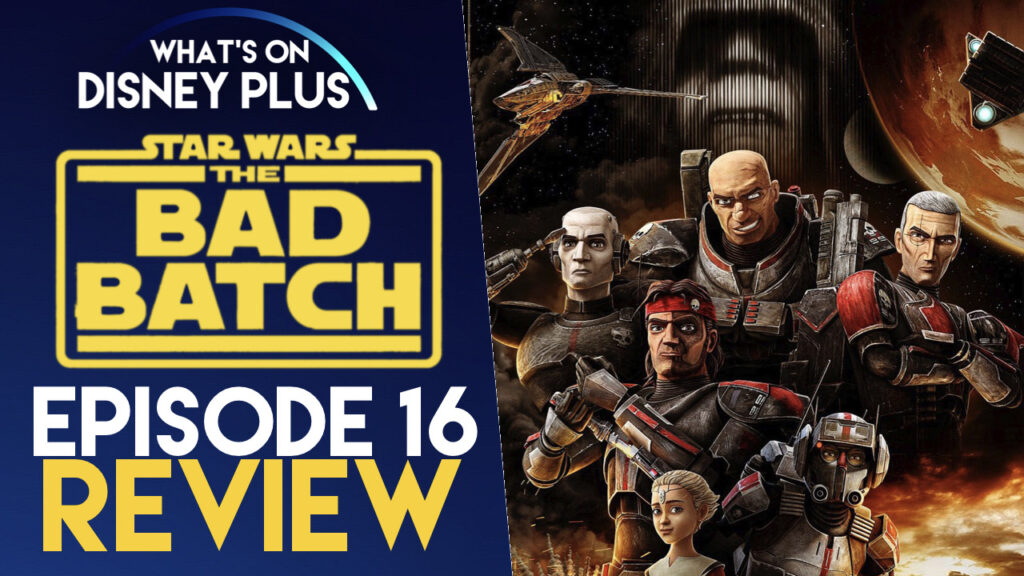 Well, it’s that time of the week again with another episode of Star Wars The Bad Batch, but this one is the season finale.

Kamino Lost starts right where the previous episode Return To Kamino, left off, with The Bad Batch running through the wreckage of Kamino as they try to return to their ship.

When a door locks Omega, Crosshair and medical droid AZ in a room, which soon starts to take on water. Crosshair is trapped under the wreckage and needs Omega and AZ’s help to get freed as the rest of the squad tries to open the door.

Once Crosshair is freed, and the door is open, the crew continue their journey to reach their ship. However, the part of Kamino they were in starts to sink, leading them to have to go to their old barracks and go through an underwater tunnel.  But as they walk through the underwater tunnel, Crosshair shows concern as the glass of the tunnel is beginning to crack and break.

Once they get to a safe area, they use medical containers to blast their way up to the surface. However, after AZ runs out of power, Omega leaves her container to rescue him.

Noticing something is wrong, Hunter goes to jump in the water to help her, but Crosshair points a sniper near Hunter’s head and fires a grappling hook which he uses to save Omega’s life. Once they get back to the ship, both Hunter and Omega ask Crosshair to go with them, but he remains stubborn and remains on the landing platform they had left the ship on as the rest of the squad flies off.

Once again, “Star Wars: The Bad Batch” has proven that Dave Filoni is a master when it comes to the Star Wars galaxy. Star Wars The Bad Batch has interesting characters who are sometimes torn between the right choice and what their hearts tell them is right. The animation quality is spectacular as always, and the two-part finale is a two-part of greatness. The only thing I found annoying in this episode is Crosshair’s constant bickering with Hunter and later Wrecker and Tech. However, that doesn’t take away from the fact it’s clear Hunter and Crosshair have different ideologies. “Star Wars: The Bad Batch” has been renewed for Season 2, so I guess we’ll find out in 2022 where the story goes. Overall this episode shows that The Bad Batch is still a show about a family, regardless of what happens between the team.

Thoughts On The Series As A Whole:

Another big problem with the series is the pacing. To my knowledge, “Star Wars: The Bad Batch” takes place within a few months of the end of The Clone Wars and the formation of the empire, and yet somehow, the series feels further on in the timeline than it really is. I mean, why did the empire scrap their new clone army shortly after gaining them? surely that would have taken years to be phased out? But the relationship between Hunter and his men and Omega is super sweet, Hunter is a leader and a soldier, but he’s willing to adapt and change to help his crew or characters like Cut Lawquane or Captain Rex.

Honestly, “Star Wars: The Bad Batch” isn’t a perfect show, no show or movie is perfect, but The Bad Batch is good fun for Star Wars fans and is a welcome addition to the Star Wars canon timeline, which, unfortunately, the next Star Wars show, “Star Wars: Visions” ISN’T going to be a part of. Hopefully, Season 2 will build on the characters and how they see the galaxy or how they see themselves, soldiers without a war to fight.

Overall this is probably the best episode of the show, 4/5 Stars.

“Kamino Lost” and all other episodes of “Star Wars: The Bad Batch” Season 1 are now available on Disney+.

Ethan "Neil" Holloway is a huge Marvel, Star Wars and Pixar fan who grew up with Disney movies like Iron Man and The Lion King. Ethan has always been fascinated by movies especially ones that give a fair representation to those of disabled backgrounds and hopes to one day publish a novel with Disney Publishing Worldwide. You can call Ethan the "Disney Anime Guy" if you want.
View all posts
Tags: review, star wars, star wars the bad batch