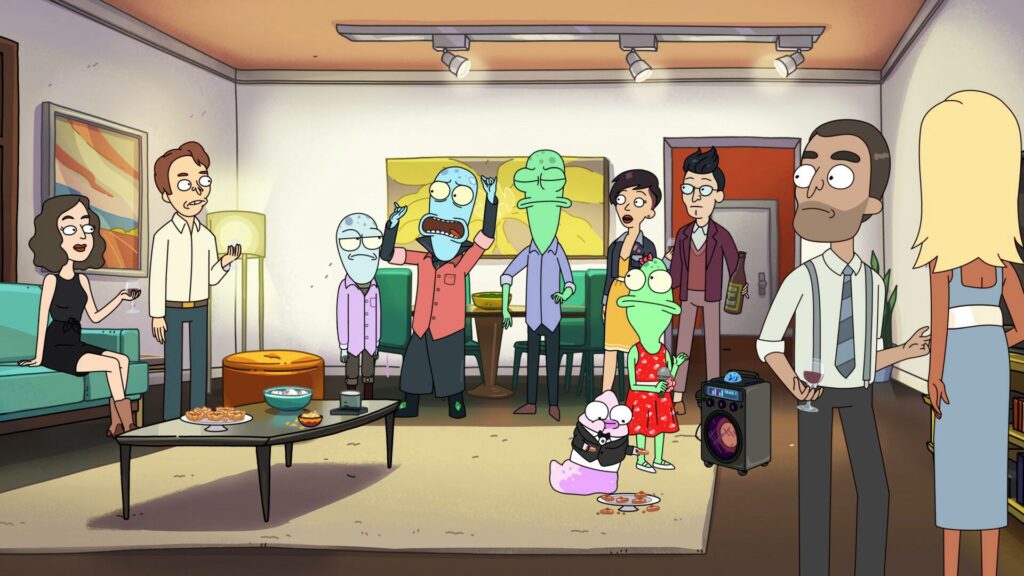 The second episode of the second season arrives on Disney+ in many regions on Friday and sees the Aliens struggle with the concept of Dinner Parties and the Wall returns!

Terry has become obsessed with going to dinner parties and Korvo is struggling to make small talk at these events, leading him to get so annoyed, he managed to get dinner parties made illegal.  Resulting in Korvo and Yumyulack becoming the party police, while Terry uses Korvo’s technology to hide the parties.  As you might expect, everything doesn’t go to plan and it all ends up rather messy!

The Wall is one of the most interesting aspects of “Solar Opposites” as it’s unlike anything we’ve seen in other adult animated series, as Yumyulack once again shrinks down an annoying person he meets and pops them into the Wall.  A lot has changed since the first season ended, with the Wall now offering a new chance at a second life, with fresh produce and a career doing what you love.  However, all is not what it seems and something evil lurks within.   It’s a fascinating side plot away from the aliens, since it’s human-focused and basic survival. 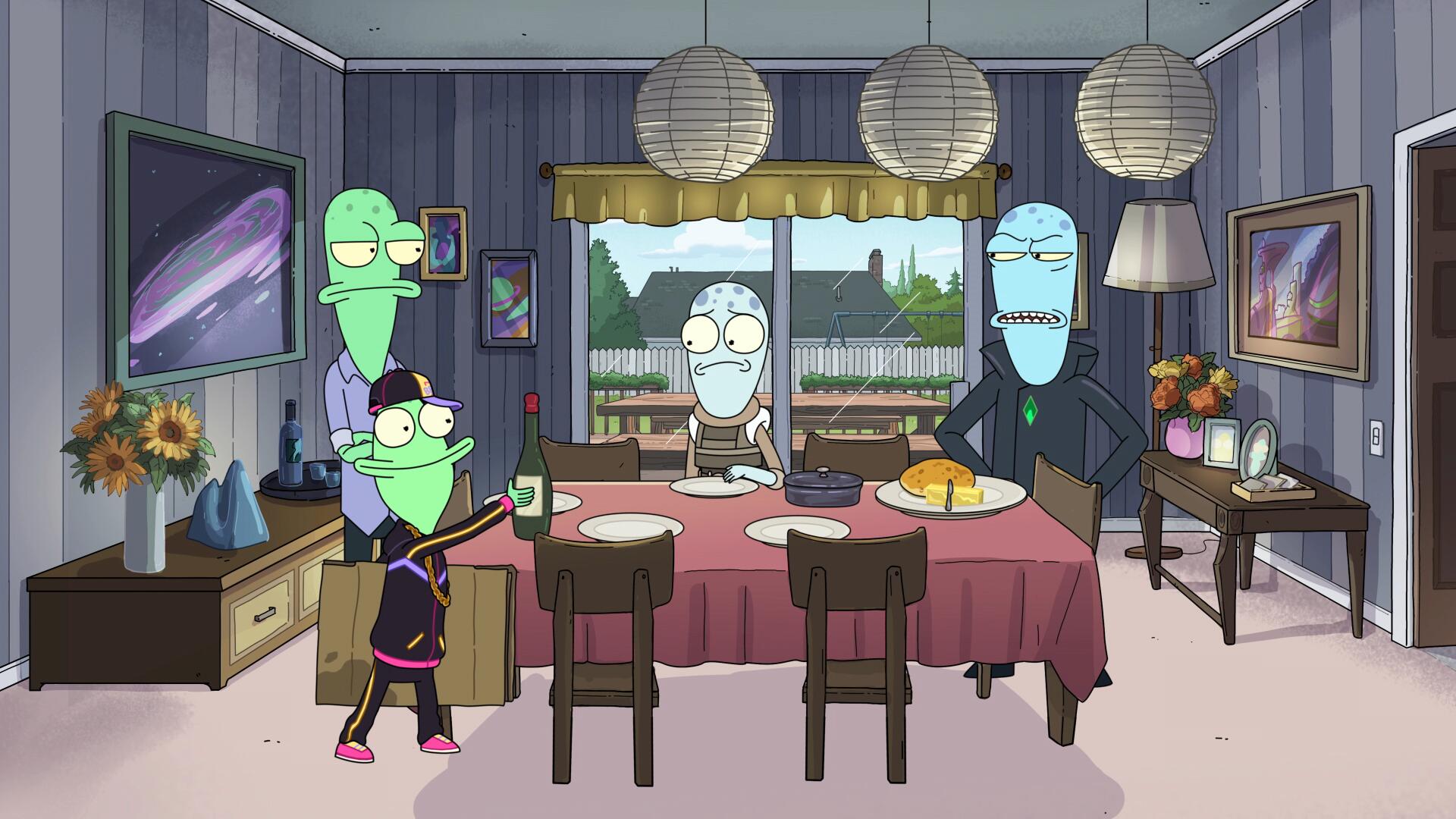 Whenever I fire up a new episode of “Solar Opposites”, I never know what I’m going to see next.  It’s something I’ve quickly grown to love.  It’s just such a random show, with bonkers ideas that seem to work.   The format and characters of this series are so unlike what we see in “The Simpsons” or “Family Guy”.  Real-world problems can lead to giant dog monsters that eat people and poop them out as a bottle of wine!  This isn’t something anyone would guess in advance of a show being released and that’s still not the craziest thing in this episode.

“Solar Opposites” has quickly become one of my favourite shows and it’s a show I can sit back, have my lunch while catching up with the latest episode.  With the show only lasting barely 20 minutes, it’s such an easy and fun way to consume entertainment.   It’s not for everyone but for me, I’m loving it.

Episode 2 is another great episode, with the aliens doing something stupid that they have to fix and the Wall adding that larger story arc for the season.   It’s a lot of fun and I can’t wait to watch the next episode. 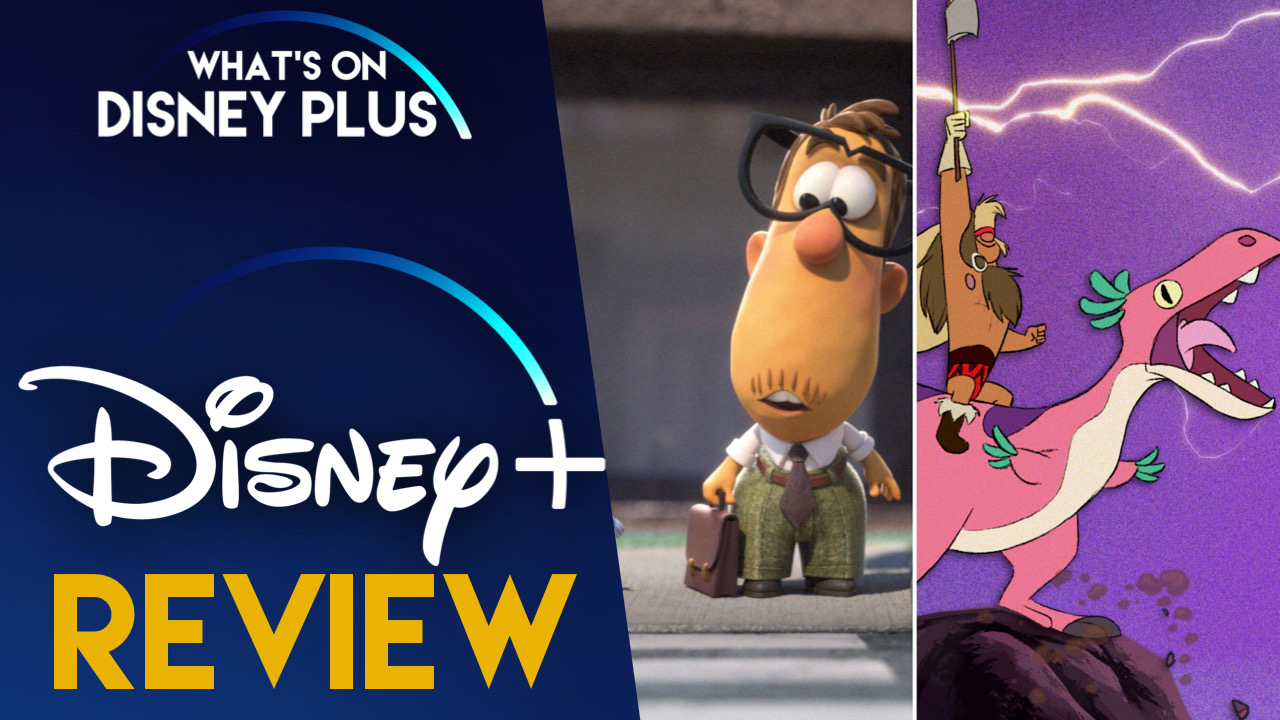