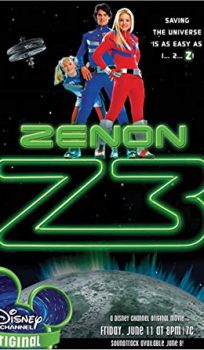 In the third installment of the hit Zenon trilogy, it’s 2054 and Zenon Kar is 17 and competing to win the Galactic Teen Supreme contest and celebrate at the Moonstock Festival. Zenon wants to beat handsome competitor Bronley Hale. She also reunites with Moon preservation activist Sage Borealis. Sage is desperate to keep the Moon from being colonized and exploited and wants Zenon’s help. Meanwhile Commander Edward Plank and Aunt Judy Cling’s new foster daughter, Dasha, is star struck by Zenon and finds it difficult to stay out of trouble. During the last competition for the Galactic Teen Supreme contest, the moon goddess Selene appears and threatens to destroy the Earth. It’s up to Zenon to save everyone from this angry deity. In the end, Zenon, Sage, Dasha and her friends Margie, Cassie, and Bronley team up to save the day. They evacuate everyone in Protozoa’s tour bus and try to remove the Moon Dome, with each taking a hover pod. Unfortunately, the dome is too heavy, until Commander Plank and Aunt Judy show up having been looking for Dasha. They’re able to help lift the dome, which they let drift off into space. Selene then destroys the rest of the base and waves goodbye as the friends return to Earth. The wild weather caused by Selene has stopped. In the end, Sage and Zenon kiss, and Protozoa’s band Microbe and the new hit band, Cosmic Blush, hold a concert together.