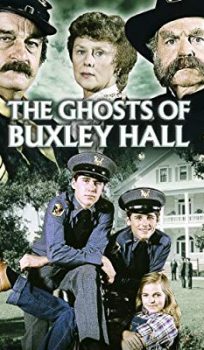 The Ghosts of Buxley Hall

Buxley Hall is a military academy founded by General Buxley about a hundred years ago. Today, it’s been beset with financial problems so Buxley descendant and the commandant of Buxley Hall decides that the best way to save it, is to merge with an all-girls school. This doesn’t sit well with the General, who as a ghost along with his Sergeant does what they can to get rid of them. Also new to Buxley is Jeremy Ross, an heir to a fortune who is currently in the custody of his uncle. However, his aunt who wants him so that she could gain access to his fortune is doing what she can to do that or get rid of him. The sergeant comes to Jeremy’s aid and eventually befriends him.