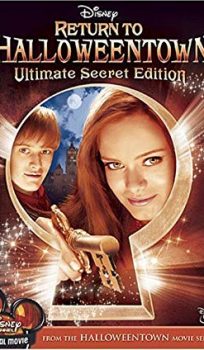 Marnie and Dylan have graduated high school and are now going to go to college at Witch U in Halloweentown. Marnie is offered a full scholarship, Marni’s mother, Gwen of course does not want her daughter at school in Halloweentown so she forces Dylan to tag along. At the school, witches and warlocks can’t use magic. Marnie soon makes a new friend named Aneesa, whom is a genie. Marnie soon discovers that she is partly to blame for the rules against the use of magic at school. At one point a box, with the name “S. Cromwell” inscribed on it, magically appears in front of her. Most people at the school believe that Marnie used her magic to conjure up the box, but it was brought to her by fate.