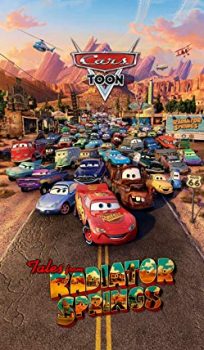 Bugged is the second episode of Cars Toons: Tales from Radiator Springs. Red was watering his flowers when a bug flies up to his face. Red blows it away, but it comes back. He tries blowing it more, but it was still coming back. He tries shaking it off, and even honking his horn, but it still wouldn’t leave. Then, he tries to splash water on it, and it worked. He was happy, until he sees the bug on Stanley’s statue. He was sad, as the bug was covered with water and couldn’t fly. Red blows him dry, and he was able to fly again. Red watches the bug fly away, and goes back to watering his flowers. However, the bug comes back with two more bugs. The bugs still bother him, but he still continues watering his flowers.