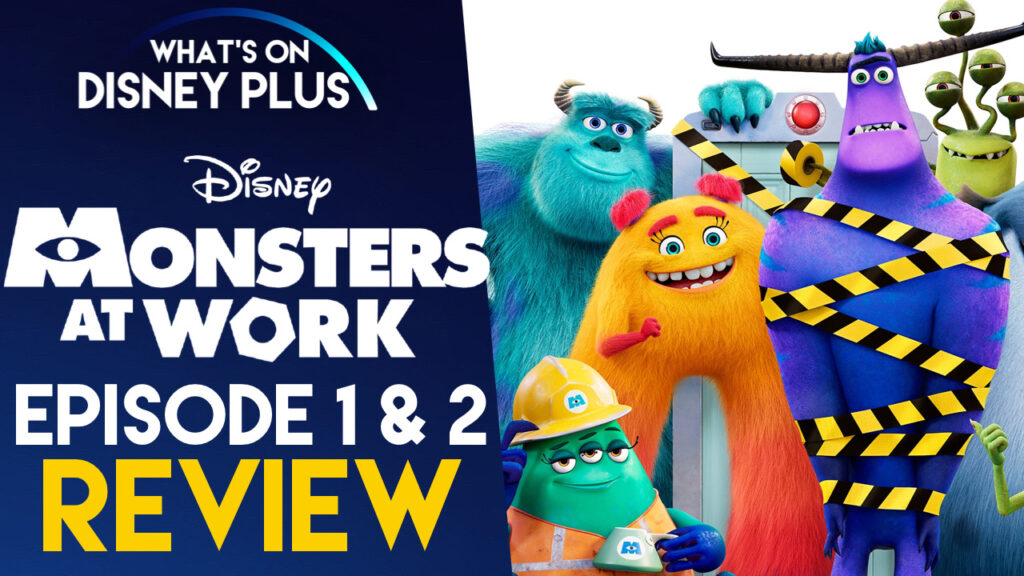 “Monsters At Work”  was one of the very first Disney+ Originals announced, is finally getting ready to arrive on Disney+ and the series takes place the day after the events of “Monsters Inc” film, where the Monsters, Incorporated power plant is transitioning to trying to harvest the laughter of children to fuel the city of Monstropolis.

The show stars a batch of new characters, including Tylor Tuskmon, who is an eager young monster who graduated top of his class at Monsters University and always dreamed of becoming a Scarer until he lands a job at Monsters, Incorporated. But on his first day, he discovers that scaring is no longer a useful skill and is temporarily reassigned to the Monsters, Inc. Facilities Team(MIFT). He must work alongside a misfit bunch of mechanics while setting his sights on becoming a Jokester.

Unfortunately, this series isn’t created by Pixar and is instead being handled by Disney Television Animation, who I think has done a great job in making this show feel like a continuation of the film. The visual effects of the series look acceptable, as it looks very similar to the original film. Though I think this is a positive for the Monsters At Work series But it’s important to remember that Monsters Inc was released twenty years ago, so technology has progressed a lot since then, especially when you compare the look of Monsters Inc to today’s modern Pixar films like “Luca” or “Soul”.

While this series does follow Tylor and a new bunch of characters, there is still plenty of screen time for the established characters like Mike, Sulley and Ceila. Though I would have liked to see more of them and less of the new characters, it does make sense for the show to shift away to the underdogs, rather than the underdogs who are now running the place.

With each episode around 20 minutes long, “Monsters At Work” is a run little series that fans of the original movies should enjoy, but it’s important to note, this isn’t a third Monsters film, but it’s a nice dip back into the world of these characters. However, it doesn’t do anything new or exciting. It’s just more like a straight to video sequel to “Monsters Inc”, split into episodes.

Disney has been making animated series based on its popular animated films for decades, with series based on “Aladdin”, “The Lion King”, “Big Hero 6”, and many more. These series all kept fans of the franchise happy, but are generally lower quality than the films. “Monsters At Work” falls into the same territory.    Younger viewers are going to love this series, and older fans of the franchise will enjoy it as well, but need to keep their expectations in check.

I enjoyed the first two episodes of the show and will certainly be returning each week to see where it goes. It was much better than I expected it to be, as I was worried Mike and Sulley would be limited to a cameo appearance, but based on the first two episodes, it looks like they will appear in each episode. The show going to be a nice trip back into the world of Monsters Inc and well worth adding to your watchlist.

Ultimately this show is made for a new generation of Monsters Inc fans, and kids are certainly going to be laughing enough to make their own energy.  It’s worth checking out, especially if you love the two films, because this is just more of the same, just without Boo!

“Monsters At Work” will consist of 10 episodes, and the first episode will be released on Wednesday 7th July, with new episodes dropping weekly on Wednesdays.

Roger has been a Disney fan since he was a kid and this interest has grown over the years. He has visited Disney Parks around the globe and has a vast collection of Disney movies and collectibles. He is the owner of What's On Disney Plus & DisKingdom. Email: Roger@WhatsOnDisneyPlus.com Twitter: Twitter.com/RogPalmerUK Facebook: Facebook.com/rogpalmeruk
View all posts
Tags: Monsters At Work, review