The MIFT team has a bunch of young monsters shadowing them and one of them happens to be the daughter of the monster who decides which monsters become jokesters in the latest episode of “Monsters at Work” titled “Little Monsters.” Tylor has been auditioning for the laugh floor and has run out of chances. But, he hopes he will get one more if he gets the daughter of the monster who selects the jokesters to talk him up to her mother. It ends up being a crazy day with the custodians losing their Little Monster, a chase through the door carrier and Tylor accidentally being funny when he crashes a cart trying to reach the little girl.

This is the first episode where I truly cared about some of the characters on the MIFT team. While the main focus has been on MIFT, the best parts of the show have been on Mike and Sully. This is the episode where I truly felt like Tylor and Val had something I wanted to follow. Their interactions with their little monsters were great. Tylor’s selfish escapade nearly costs him, but it ends up being the best thing for his career as he learns he’s really good at MIFT and he’s finally funny to someone when he makes the little girl laugh. And, Val, who has always been gung-ho about MIFT, finds a little monster with the same attitude as her. They find their place and their story works. I still don’t care much about the actions of the other members of the team, but they’ve made me care about two of the new characters, so there’s a chance they’ll improve on that going forward. 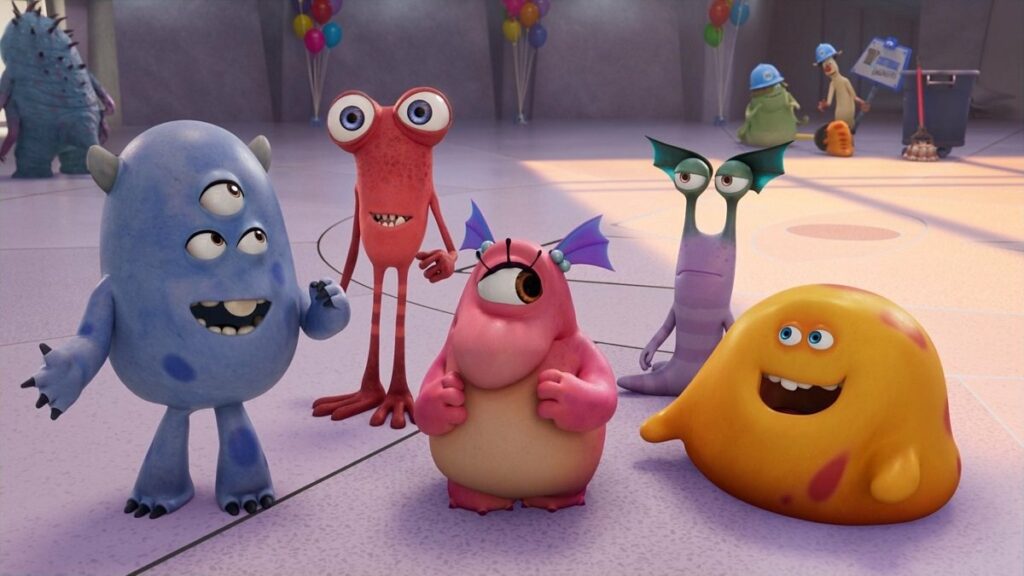 Meanwhile, two connections to the actual “Monsters Inc.” film brought a smile to my face. The most obvious is Mike’s comedy class at the end of the show. These are usually very funny segments, but this one was my favorite one yet. Seeing Mike and Sully riffing on each other as Mike describes the comedy duo of the straight man and the goofball, while he embodies the goofball but thinks of himself as the straight man is hysterical. All credit goes to how funny Billy Crystal naturally is and how well John Goodman plays the straight man. The other thing that I enjoyed was seeing Adorable again. A lot of shows will bring in a fan-favorite character from movies for one episode and then completely forget about them. But, Adorable appearing in just a cameo as a snow cone salesman is perfect. We get to see some connection to last week’s episode. We get to hear John Ratzenberger again. We get continuity between the movies and the show. It wasn’t a big scene, but it was great and I hope they can do that more often.

Did I think this episode was as funny as last week’s episode? No. A lot of the previous episode’s charm comes from the return of Ratzenberger. But, I think this episode was better because it actually advanced the main story arc in a way that made me appreciate Tylor’s journey and care about more of the new characters. More episodes like this and less filler, please.

What did you think of this episode of “Monsters at Work?”

Jeremy has been a big Disney fan since he was a kid growing up during the Disney Renaissance. One day he hopes to go to every Disney Park in the world.
View all posts
Tags: disney, Monsters At Work, monsters inc, review