What does a Marvel movie sound like? For some Marvel films, like The Avengers or Spider-Man, their theme songs can be quite iconic. For films like Captain Marvel or Ant-Man and the Wasp, though, it may be more difficult to hum the hero’s main theme.

As a whole, the Black Widow soundtrack has a sound unlike any other Marvel movie, and I would venture to say that it is the most inventive Marvel soundtrack since Ludwig Göransson’s score for Black Panther. Composer Lorne Balfe has written music for a wide variety of action movies, and his work on Black Widow serves as a very bold entrance into the MCU.

Like other Marvel movies, the Black Widow soundtrack is very action-heavy, but I didn’t notice any recurring themes when I first watched the movie. After taking a second listen, songs like “Latrodectus” and “Natasha Soars” highlight the common musical thread that weaves through the film. Balfe’s use of choir elements (see also “Arise” and “A Sister Says Goodbye”) helps to solidify the Russian influences of the film, and the Russian choir makes tracks like “Natasha’s Lullaby” and “A Calling” have more weight and intensity. 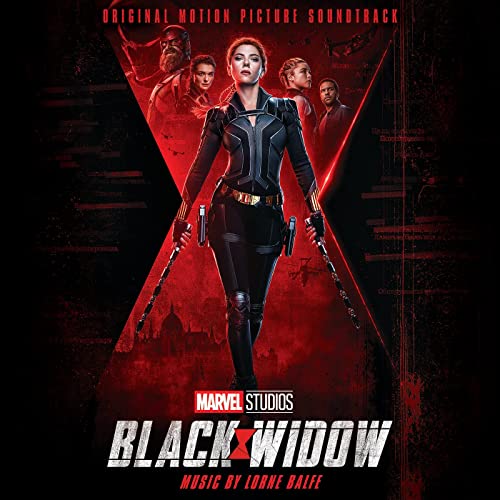 In between the many upbeat tracks on the album, Balfe includes a few slower, lyrical tracks to carry the emotional weight of the film. I absolutely love the track “Fireflies”, and “Blood Ties” is one of my favorite tracks from any MCU film to date. As we get closer to the end of the soundtrack and the film’s climax, Balfe includes some great musical references to the Avengers theme, solidifying Natasha’s place in the Avengers and creating a better connection to other MCU films.

All in all, while the Black Widow soundtrack may not have the same “sticking power” as some other Marvel music, it truly establishes the film’s Russian setting and finally gives Black Widow a musical theme of her own.

Corban has been a lifelong fan of The Walt Disney Company. Disney music is often the soundtrack of his life, and he loves listening to a new film score. In between reruns of The Mandalorian, you can often find him planning his next trip to the Disney Parks or rewatching classic Disney TV shows.
View all posts
Tags: avengers, black panther, black widow, lorne balfe, Marvel, review, soundtrack