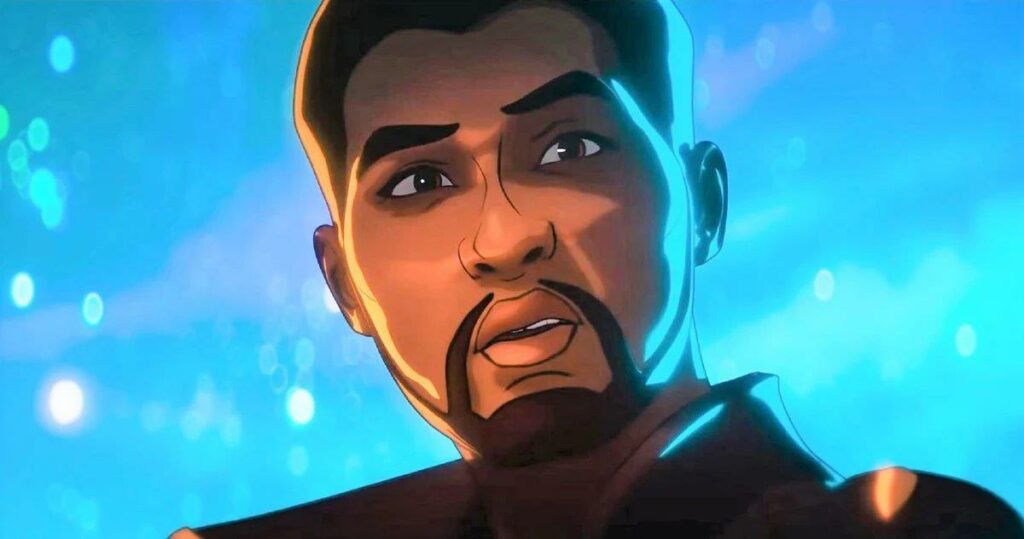 Sadly, this is going to be the final performance of the late Chadwick Boseman in the role of T’Challa. In one of the episodes, the twist is that T’Challa is taken by Yondu, instead of Peter Quill, resulting in T’Challa becoming Starlord.  Chadwick Boseman is also appearing in other episodes of the show as different variants of T’Challa.

During a recent press conference,  Brad Winderbaum, who is an executive producer on the show spoke about working with him for the show.

It was amazing being able to work with him.  Um, I mean, we-we only got a s-a-a small moment ‘cause our episodes are so short.  You know, compared to everyone who was able to enjoy, uh, his presence, like on Black Panther, you know, or even on Civil War.  We had him for a little moment, to do our thing, and we’re so grateful for it.  I think he may have been even one of the first, um, actors that maybe, like, signed on and said, “Oh, yeah, I’m gonna do that voice.”  And we were so excited ‘cause we really, really, really wanted to work with Chadwick and we just loved Black Panther.  And we love him.  And a-about the record, specifically, something that was kind of fun is he’s theatrically trained and, um, you know, sometimes you get a-the actors in the booth who like to work differently.  To-to-based on the needs or the wants of the particular actor at play, sometimes they don’t wanna just hit the line, hit the line, hit the line, be done, move on to the next one.  It’s cool.

Um, but some that read it like a scene.  And he really wanted to do it like a play.  Like, reading the scene descriptions in between, like, really build it out like a play.  And, um, ‘cause that’s how he’s trained, that’s what he’s comfortable with and that’s what he wanted to do.  And it was so much fun being able to do that.  It’s like, we got to, like, basically read lines with Chadwick Boseman.  You know, our, you know, non, you know, actor trained way [LAUGH].  We do the best we can, but we, doin’ a performance with Chadwick, amazing.  So, I-i-it was awesome.  And, you know, none of us knew what he was going through at the time, of course.

And he came and-and he brought it and he had a lot of fun.  And-and it was really great to hear on-him talk about he was excited to play this particular version of T’Challa because-because it was different.  Because it was a version of him being able to play the king, but the king without the mantle, you know, of-the-the without the-the mantle of royalty and all the other things that go with it.  Completely different spin, you know, he could lighten it up, he could get a little bit more jokey with it and stuff.  He was excited to bring that-that flavor to T’Challa and-and give it to the audience, you know, so we can see a slightly different version of T’Challa.

He was really excited about it and we were so excited, and we’re-we’re blessed to have him in this show.  He did an amazing job

The first episode of Marvel’s “What If” is coming to Disney+ on Wednesday 11th August, with new episodes arriving weekly.

Roger has been a Disney fan since he was a kid and this interest has grown over the years. He has visited Disney Parks around the globe and has a vast collection of Disney movies and collectibles. He is the owner of What's On Disney Plus & DisKingdom. Email: Roger@WhatsOnDisneyPlus.com Twitter: Twitter.com/RogPalmerUK Facebook: Facebook.com/rogpalmeruk
View all posts
Tags: black panther, Marvel, what if