Disney has released a new clip from the latest episode of Marvel Studios’ “What If?”, which arrived on Disney+ today.

In this episode, the question asked is “What If…. Thor was an only child?”

Disney has also released a new poster for the episode featuring Howard The Duck: 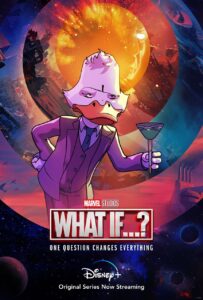 “What If?” is available now on Disney+?