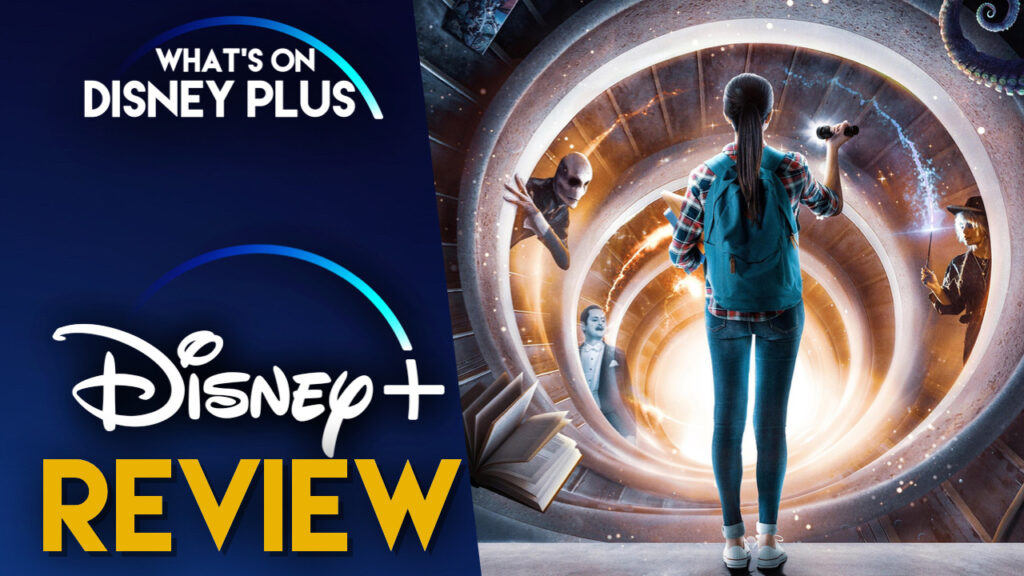 Disney’s latest series, “Just Beyond”, is inspired by the writings of R.L. Stine and is an eight-episode anthology series that tells astonishing and thought-provoking stories of a reality just beyond the one we know, which includes witches, aliens, ghosts and parallel universes.

Each episode is completely unique, featuring an entirely different cast of characters and actors, which makes this series somewhat different to anything else on Disney+ so far. Each episode is 30 minutes long, so it means the pacing for each story is generally pretty fast, with a quick set-up, without wasting too much time in getting right to the main focus of the story and a conclusion. Making them all nice single bites of fun spooky fun for the Halloween season.

All eight episodes are being released on Disney+ at once, rather than the usual weekly release schedule. Which I’m sure if it helps or hurts this series. On one hand, the show is much easier to binge-watch, and with a younger audience, they are much more likely to do so. But with every episode standing out on its own merits, some episodes might not get as much attention as they deserve.  I’d also suggest splitting up the episodes into different viewing sessions, especially as there are a few episodes with similar themes around teenage girls not fitting in, which start to blend together.

“Just Beyond” feels like a very high-quality Disney Channel series.  The focus of every episode is on younger teenagers, who are obviously the main target audience, but I think adults should also be able to enjoy this series too. Based on the trailer, it was clear that the series was going to have a darker tone and those moments are far and few between. The introduction is probably the only scary thing about the series. This is a great series for Disney+ to have available for the Halloween season, since it leans in heavily on traditional spooky stories.

I was pleasantly surprised by how good the show was.  I was expecting something much more childish, but the tone is about right for a family-friendly show.  It’s spooky, with an element of scary, but nothing too scary.  Families can watch this together, though if you’ve younger children, you might want to watch it yourself first.  Or just don’t pick the more scary episodes to watch, like “My Monster”.    ”

Here are some details and thoughts on each episode:

When 14-year-old activist Veronica Vanderhall is suspended from school, her parents send her to Miss Genevieve’s School for Difficult Girls, which claims to have an impeccable record for rehabilitating complicated girls with a “streak.” Miss Genevieve and her students appear to be the picture of perfection, with impeccable manners and identical, immovable hairdos. However, Veronica soon discovers that those impeccable manners mask a dark secret, and hatches a plan to help the girls regain their voices. This is a fun episode, if a little predictable, but certainly a highlight of the series. 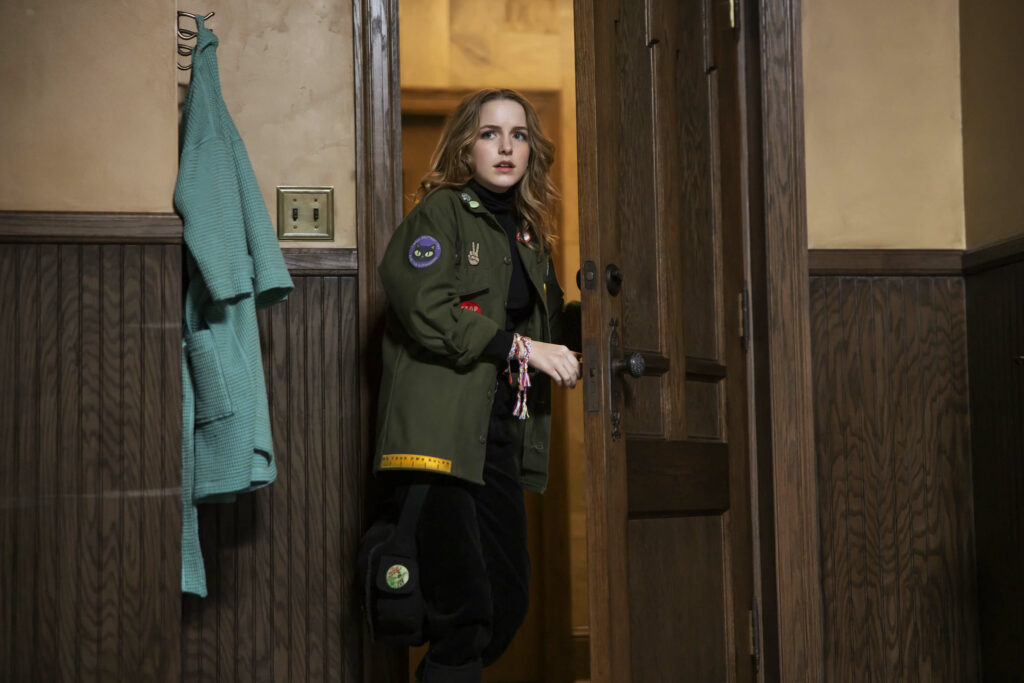 Jack and Ronald, 14-year-old best friends, swear their parents get weirder every day. But their embarrassment turns to shock when boys stumble into the adults’ game night and discover their parents dressed in ornate robes, chanting and levitating objects. Are they witches? In a cult? They seek help from the owner of a local curiosities shop, who suspects their parents are aliens. As the families hit the road for a shared trip to a remote lake house, Jack and Ronald fear for their lives. This episode doesn’t go where you think it’s going, with a fun twist.

As the only witch at her high school, Fiona has learned that the safest way to navigate her teen years is to blend in. She’s over the moon that her secret crush, Emilio, has asked her to the homecoming dance. Then, her parents drop a bomb. Cousin Luna — who Fiona loves but considers “fresh off the broomstick” — is arriving from England and attending Fiona’s school. Unlike Fiona, Luna is proud of being a witch and eager to show off her magical abilities. Fiona must decide if she’ll continue to hide … or let them see the witch. This is your typical story of a girl hiding who she is to fit in, but then embraces who she is and is happy. It’s probably one of the weaker episodes from this series. 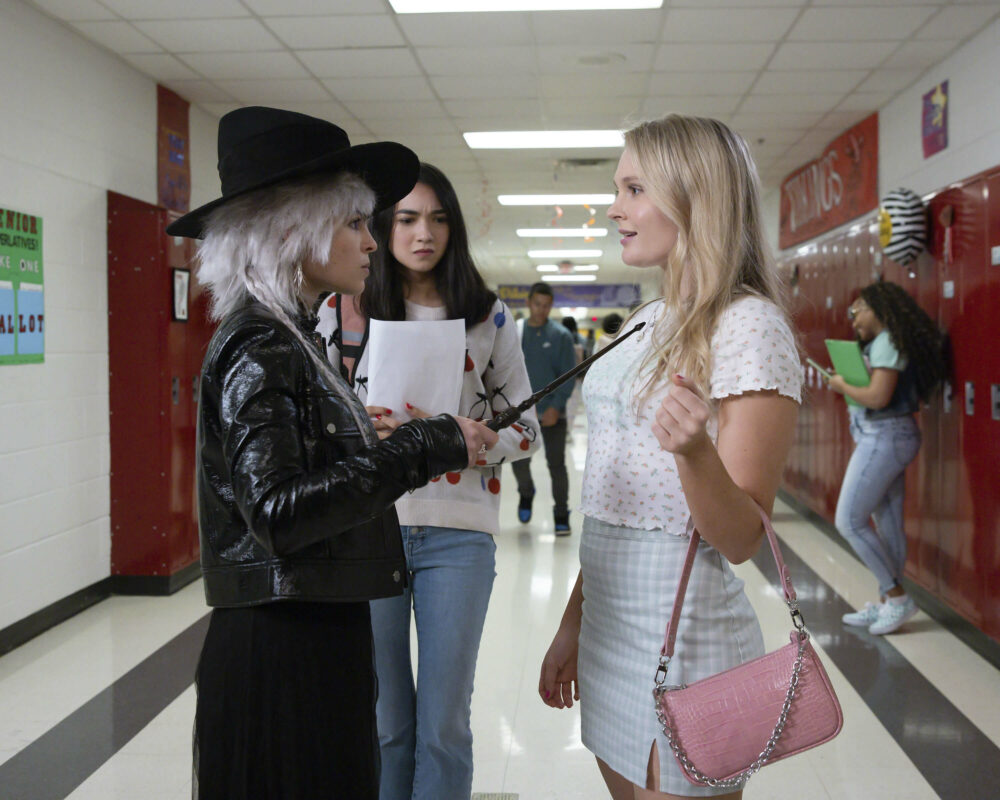 Outwardly, Olivia appears to be handling her parents’ recent divorce quite well; but inside, she’s anxious and overwhelmed. It doesn’t help that her family’s new place, her mother’s childhood home, has squeaky floorboards, flickering lights and a seriously creepy vibe. Olivia’s fears are validated when she comes face-to-face with a masked, hulking humanoid who quickly vanishes. When the heart-pounding hauntings continue, Olivia and her neighbour Graham set out to solve the mystery of the masked monster.   This is easily one of the scariest episodes from this series, just because having a rather creepy masked monster in the house is always frightening, plus it has some horrifying music that even put me on edge. 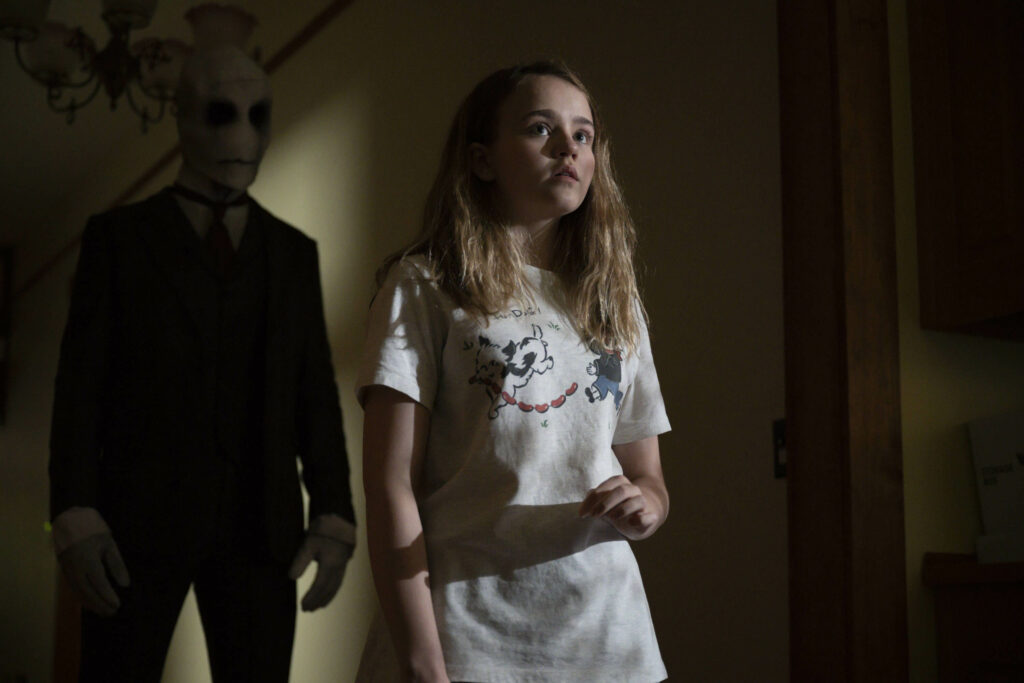 Lily Renton, the intelligent yet plain star of her high school’s Quiz Bowl team, often compares herself to celebrities and admires the popular girls at school. Just once, she wishes someone would think of her as beautiful, rather than smart. Her wish comes true when a substitute teacher introduces Lily to an invite-only beauty app that magically transforms her appearance. But all choices have consequences, and Lily must decide, once and for all, if she truly values outer beauty over inner beauty.   Honestly, this was the weakest episode in the series, because it’s so predictable, but also maybe one of the most scariest episodes, because of how teenagers look at themselves.

Fourteen-year old Ella should be excited about her class field trip to the legendary Fox Theatre. Unfortunately, her ex-best friend, Zoe, is also going. At the theatre, a tour guide tells the tale of a 1938 fire that claimed the lives of an acting troupe in rehearsal. Legend has it, the dead thespians are looking to pluck the living and drag them into their phantasmal acting troupe. When personal with Zoe sends her running off, Ella finds herself trapped in the theater after dark, and in the middle of a ghostly drama.    This one took a while to get going and the ghosts enter the episode, but generally, I found this episode a little dull. 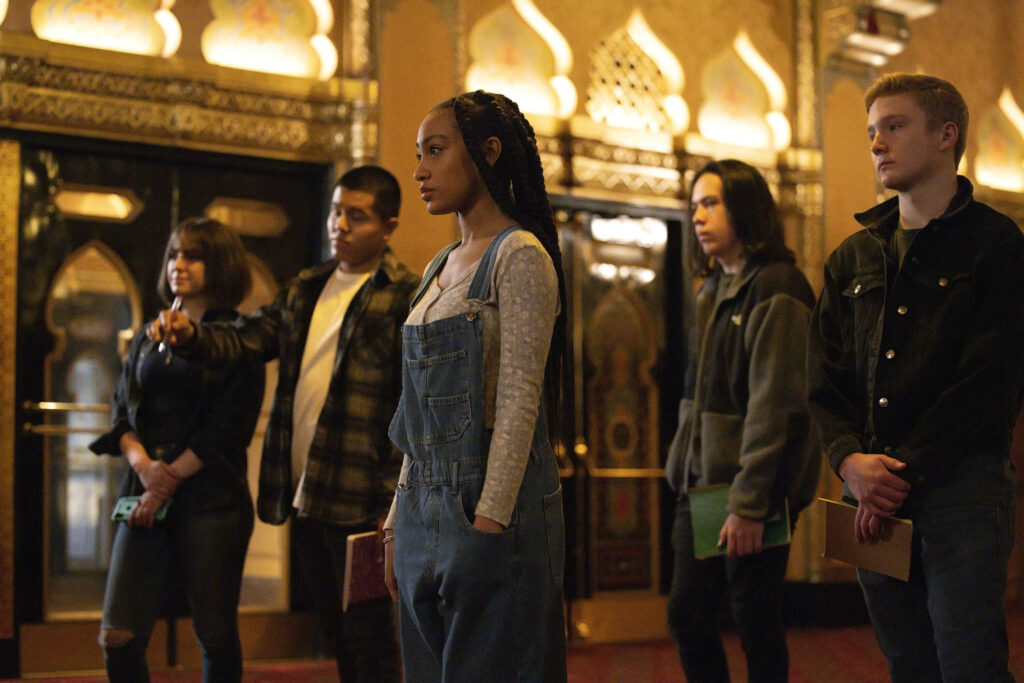 The idyllic town of Larkinville is tormented by 13-year-old Trevor Larkin, a bully with a menacing scar and massive build. Trevor is particularly pumped when a new student, aka an ideal target, arrives to school. Fourteen-year-old Evan Burger wears glasses, hand-me-down clothing and a prosthetic leg that makes him walk with a slight limp. But appearances can be deceiving and when Evan stands up for himself, Trevor’s actions will change his life — and Larkinville — forever.   This was a fun episode, because its so different to everything else in the series.  The big bully is so nasty, it was fun to watch him get his comeuppance.

It’s been nearly a year since Sam’s dad passed away, and after saving up his money, Sam just became the proud owner of his late father’s favorite comic in mint condition. That is, until the neighborhood bully snatches it and tosses it in a puddle. Wrecked, Sam retreats to the treehouse he and his father built; but lightning from a fast-moving storm cracks a branch and sends him tumbling to the ground. He awakens in an alternate universe, where strange yet familiar encounters ultimately lead him to an excruciating choice. This is a lovely heartwarming story of trying to help Sam get over the loss of their father. I really enjoyed this one. 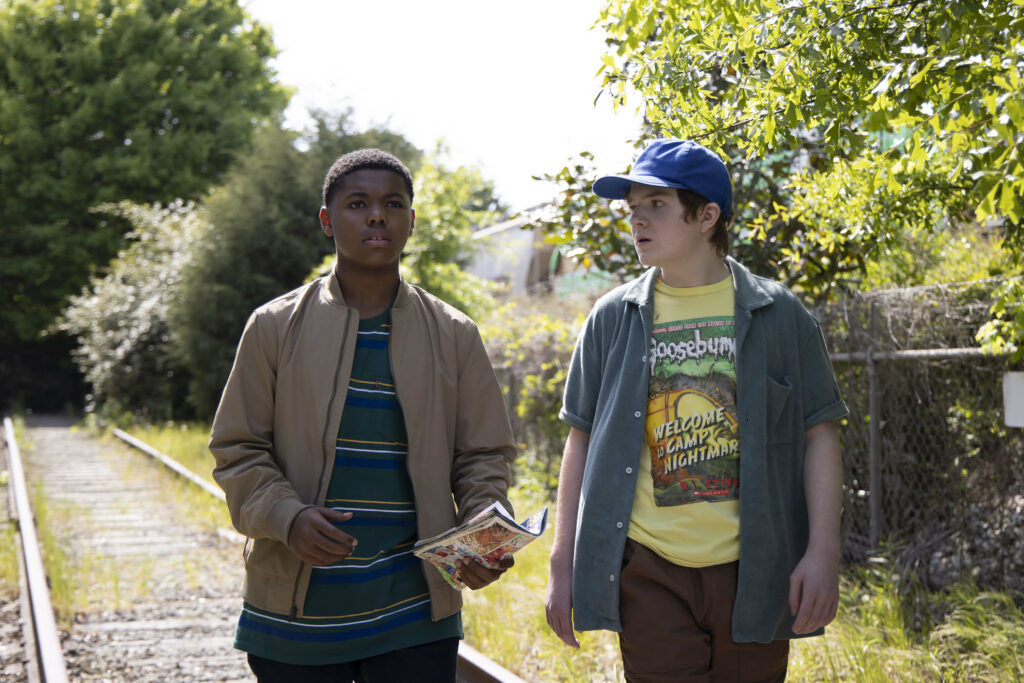 Overall, “Just Beyond” is a great addition to Disney+. The anthology nature of the show means each one has to stand out on its own, some are naturally weaker than others, but also this means every viewer will have their own favourites.  Just Beyond” is a fun spooky adventure for the whole family.

All eight episodes of “Just Beyond” are coming to Disney+ on Wednesday 13th October.

Roger has been a Disney fan since he was a kid and this interest has grown over the years. He has visited Disney Parks around the globe and has a vast collection of Disney movies and collectibles. He is the owner of What's On Disney Plus & DisKingdom. Email: Roger@WhatsOnDisneyPlus.com Twitter: Twitter.com/RogPalmerUK Facebook: Facebook.com/rogpalmeruk
View all posts
Tags: Just beyond, review