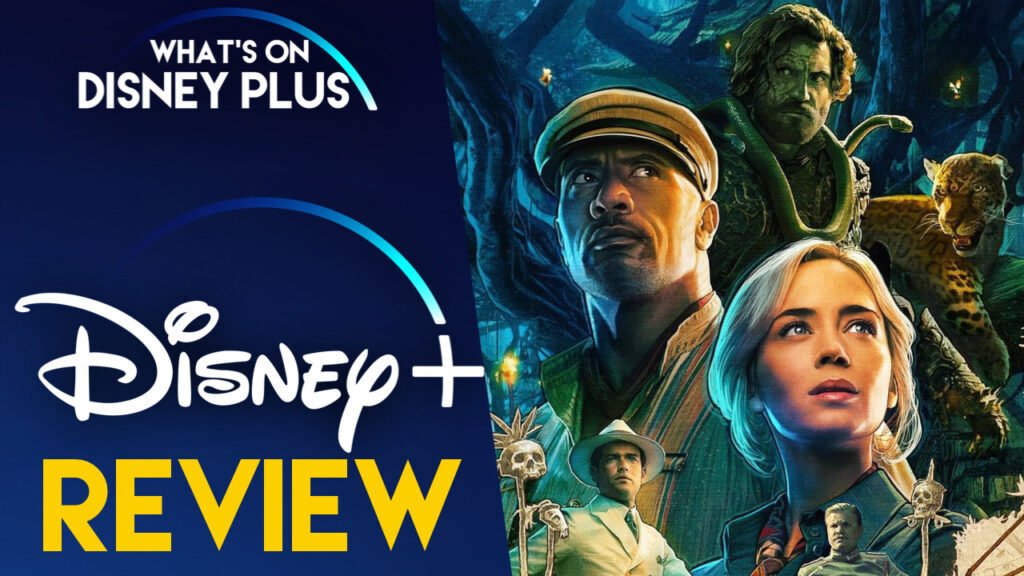 After a years delay, Disney’s next big summer blockbuster “Jungle Cruise” hits finally hits cinemas and Disney+ Premier Access on July 30th.  The film stars Dwayne Johnson as Frank the Skipper, with Emily Blunt, playing Dr. Lily Houghton,  who is an explorer who wants to track down an ancient tree with unparalleled healing abilities, that could change the future of medicine and also help with the first world war effort.  She is joined by her younger brother, MacGregor, played by Jack Whitehall.

The film kicks off with Dr Lily breaking into an adventurers club to steal an arrowhead, that can be used to track down the mysterious tree of life and it doesn’t take long for the film to go into full-blown adventure mode, with an elaborate escape that Captain Jack Sparrow or Indiana Jones would be proud of.  Leading to Lily & MacGregor heading off to the middle of the Amazon, with a rather stereotypical German prince on their tail with a huge submarine!

From there the action continues as they hire Frank to help get them to their destination, but not everything is as it seems and this leads on to plenty of big summer blockbuster fun that is completely disconnected from reality.  It’s all one big hoot and full of action, that I really enjoyed, but you certainly don’t need to think too much about.

For fans of the classic theme park attraction, there are plenty of really bad corny dad jokes, that will instantly make you groan with how bad they are.  It’ll make you feel like you are back on the ride, just without the 50-minute wait queue in the heat to board the boat.

There are a few other little nods to the classic attraction throughout the film, which is a nice touch for Disney park fans, but the connection to the ride is pretty loose, though I can’t help think, should this film be a success (and I don’t see why it wouldn’t), it shouldn’t be too hard to add some elements from this film into the attraction.

If you enjoyed “Pirates Of The Caribbean”, you should love this too.   They basically took all the elements that made that franchise work and tweaked it.  Dwayne’s charisma just shines through the entire film and he has great on-screen chemistry with Emily Blunt.  She also gets her own laughs in and is also shown to be a capable woman, who doesn’t need rescuing and is an equal, even if during the early 19th century when this is based, women weren’t treated as equals but she knows much more than the “adventurers” club of old fashioned men.  I’ve been a fan of Jack Whitehall’s standup and adventures around the world with his father for a while, so adding him didn’t distract too much from Frank or Dr Lily, while also getting plenty of comedy moments himself to shine.

I enjoyed this film so much, I’ve already watched it twice, (one of the benefits of watching at home!), though make no mistake, this is a huge epic blockbuster, with a huge presence, with big explosions, fighting, comedy, plus some twists in the story that I certainly wasn’t expecting (but no spoilers!).

“Jungle Cruise” is a delight and a perfect summer popcorn blockbuster hit, it is an action-adventure up the Amazon that delivers exactly what it promises.  It’s ultimately a film based on a classic Disney theme park ride, we’ve had to wait a little longer than we would have wanted, but when it’s finished, you forget about the waiting!

Roger has been a Disney fan since he was a kid and this interest has grown over the years. He has visited Disney Parks around the globe and has a vast collection of Disney movies and collectibles. He is the owner of What's On Disney Plus & DisKingdom. Email: Roger@WhatsOnDisneyPlus.com Twitter: Twitter.com/RogPalmerUK Facebook: Facebook.com/rogpalmeruk
View all posts
Tags: Jungle cruise, review