Disney’s FX has announced details of two panels for this year’s New York Comic Con for ” Y: The Last Man” and “What We Do in the Shadows”.  These moderated panels will include Q&A with key cast and creatives, attendees will also be treated to special advance screening and freebies at each panel.

Here are the details on the panels:

Y: The Last Man (FX on Hulu) Panel and Screening — At Long Last! – Exclusive Advance Screening and Moderated Q&A – Based on the best-selling comics from Brian K. Vaughan and Pia Guerra, FX’s highly anticipated adaptation of Y: The Last Man traverses a post-apocalyptic world in which a cataclysmic Event kills every mammal with a Y chromosome except for one cisgender man and his pet monkey. The series follows the survivors of this new world as they struggle with their efforts to restore what was lost and the opportunity to build something better. Join Executive Producer/Writer/Showrunner Eliza Clark and cast for an advanced screening of Episode 7 and a moderated discussion about how they updated the beloved books and brought them to life. Season one is currently streaming exclusively on FX on Hulu and on Disney+ as a Star Original in the UK.

Y: The Last Man will be screening episode seven of its current first season – “My Mother Saw A Monkey” (streams October 11, 2021 on FX on Hulu). Kimberly uncovers a secret. 355 and Allison reach an understanding. Yorick stumbles on a mysterious town where things are not what they seem. Written by Charlie Jane Anders; Directed by Lauren Wolkstein. 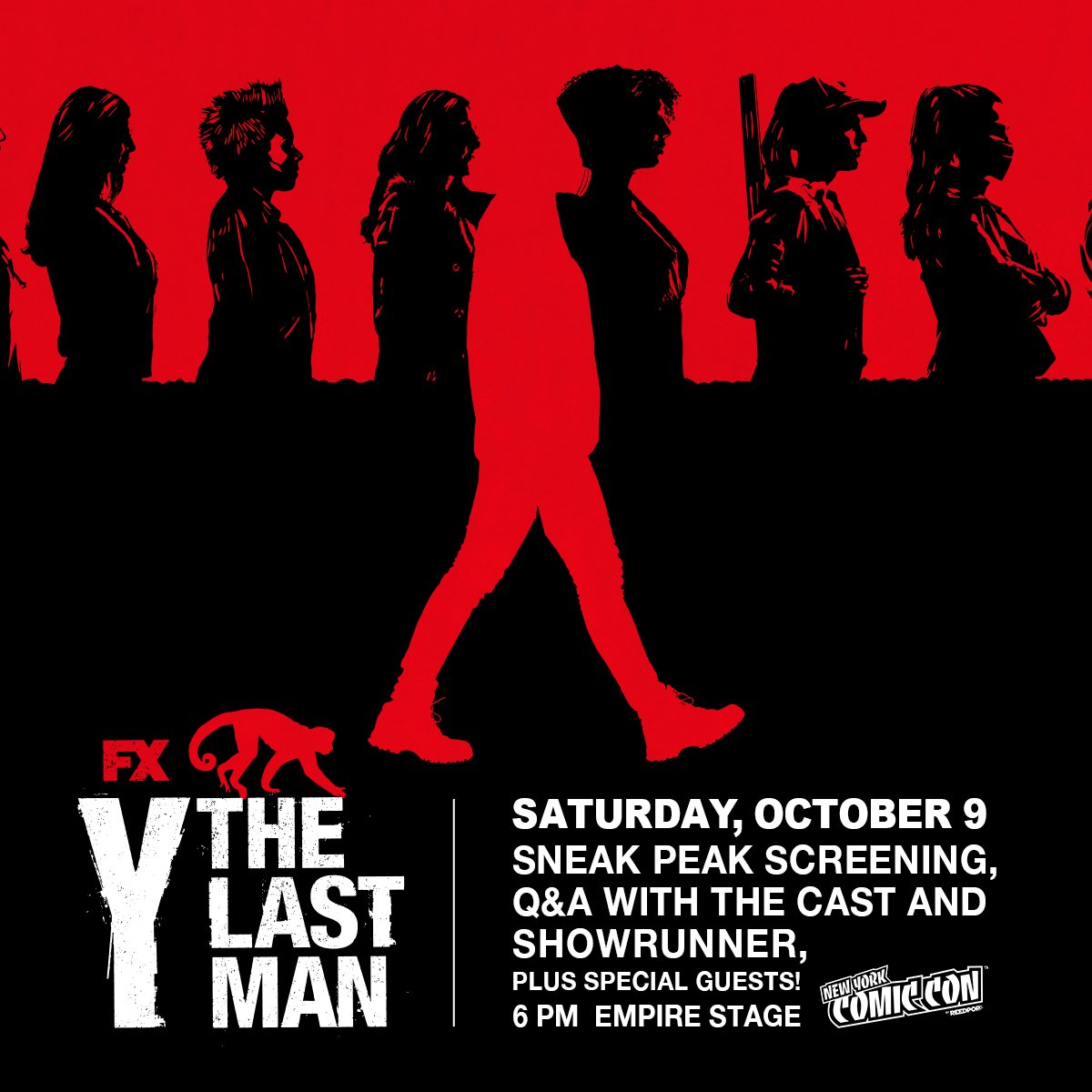 What We Do in the Shadows (FX) Panel and Screening – FX’s Emmy-nominated vampire comedy What We Do in the Shadows returns to New York Comic Con for a LIVE discussion with members of the cast and creative team.* Catch a special presentation of an upcoming episode and join special guests Kayvan Novak, Matt Berry, Natasia Demetriou, Harvey Guillén and members of its talented creative team including Paul Simms (Executive Producer/Showrunner/Writer), Sam Johnson (Co-Executive Producer/Writer) and Sarah Naftalis (Executive Story Editor/Writer) in a lively conversation about the series Rolling Stone named “the funniest show on television.” What We Do in the Shadows is a documentary-style look into the daily (or rather, nightly) lives of four vampires who’ve “lived” together for hundreds of years. Seasons 3 currently airs Thursdays at 10pm ET/PT on FX and streams the next day on FX on Hulu. Don’t miss the chance to attend the Vampiric Council of the Eastern Seaboard of the New World’s first public meeting! BAT!

What We Do in the Shadows will screen episode eight of its current third season – “The Wellness Center” (Airs Thursday, October 14, 2021 at 10 p.m. ET/PT) – Nandor is persuaded to reject vampirism and pursue a healthier lifestyle. Written by Stefani Robinson; Directed by Yana Gorskaya. 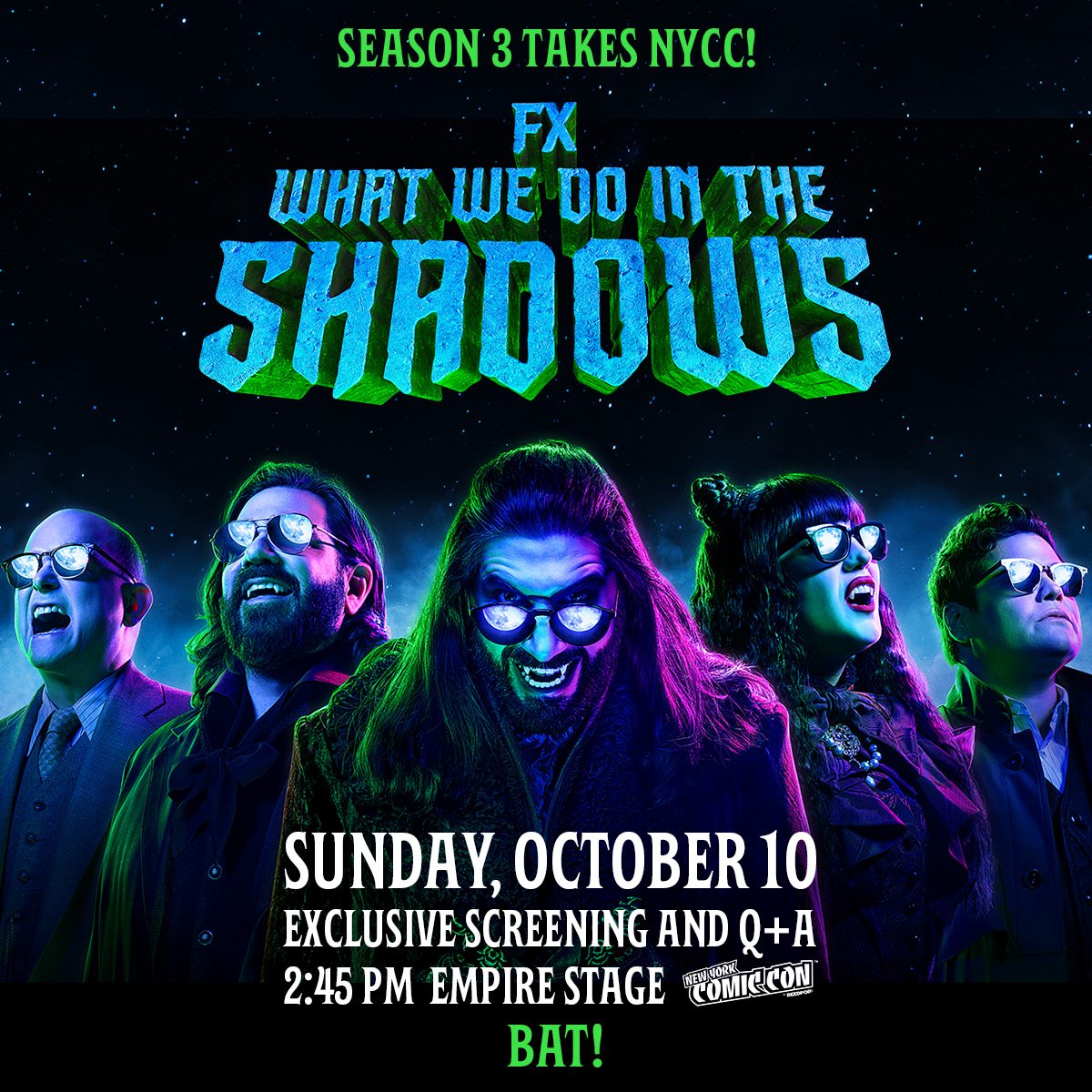 Will you be attending this year’s New York Comic-Con?

Roger has been a Disney fan since he was a kid and this interest has grown over the years. He has visited Disney Parks around the globe and has a vast collection of Disney movies and collectibles. He is the owner of What's On Disney Plus & DisKingdom. Email: Roger@WhatsOnDisneyPlus.com Twitter: Twitter.com/RogPalmerUK Facebook: Facebook.com/rogpalmeruk
View all posts
Tags: What we do in the shadows, Y: The Last Man