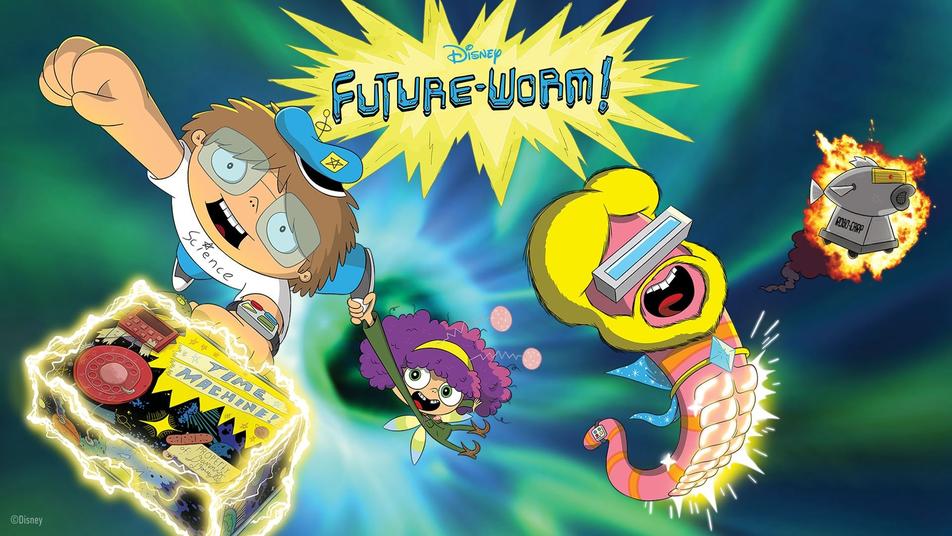 Disney has announced that the popular animated series “Future-Worm” will be coming to Disney+ in the United States and Canada on Friday 9th April.

A boy from today and a worm from tomorrow fly their time machine lunchbox straight into the heart of adventure! Join 12-year-old Danny, an optimistic relentless wunderkind, and Future-Worm, a brave, laser-proof, bearded hero, as they navigate through all of space, time and study hall, all the while keeping a spontaneous spirit of making it up as they go along. Future-Worm! celebrates the fun of losing track of time with your best friend and thrives on the freedom of time-travel without limits. See you in the future!

“Future-Worm!,” created by the Emmy Award-winning director Ryan Quincy (“South Park”).  The show ran for one season, with 21 episodes.

Providing the voice of Danny is Andy Milonakis (“Kroll Show”), while Future Worm is voiced by James Adomian (“The Late Late Show with Craig Ferguson”).

This series is currently available in the US on Hulu and DisneyNOW, but couldn’t be added to Disney+ until the current contract expired.

Are you looking forward to seeing “Future-Worm” on Disney?

Roger has been a Disney fan since he was a kid and this interest has grown over the years. He has visited Disney Parks around the globe and has a vast collection of Disney movies and collectibles. He is the owner of What's On Disney Plus & DisKingdom. Email: Roger@WhatsOnDisneyPlus.com Twitter: Twitter.com/RogPalmerUK Facebook: Facebook.com/rogpalmeruk
View all posts
Tags: Future-Worm