This Halloween, Disney is releasing a brand new Halloween film, “Under Wraps”, which is a remake of the first-ever Disney Channel Original Movie from 1997 (which sadly isn’t available on Disney+).

The story follows three 12-year-old friends, Marshall, Gilbert and Amy, who find out an Egyptian mummy has been stolen while on a school trip to the local museum.  When they discover the stolen Mummy, they somehow manage to awaken a mummy, which they affectionately name Harold.

Upon speaking with Buzzy, the manager of Ernie’s Erie Emporium Halloween store, they discover how he came back to life and learn that they must rush him back to his resting place before midnight on Halloween. Along the way, the team narrowly escapes a nefarious group of criminals who are determined to sell the mummy to the highest bidder. When Harold is inevitably captured, Marshall, Gilbert and Amy must band together to stand up to the criminals, face their fears and rescue their new—but rather “ancient”—friend. 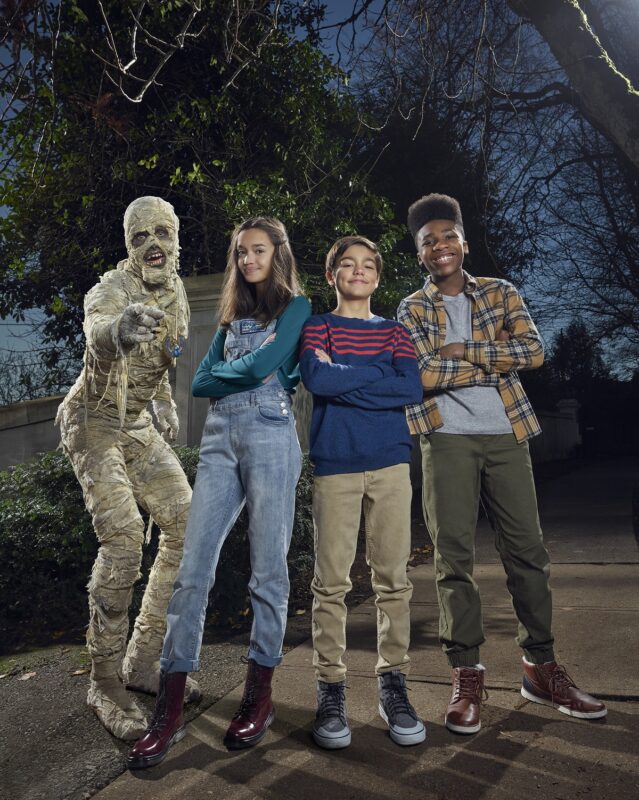 This isn’t an exact remake of the original “Under Wraps” film, they’ve changed some of the characters around a little, but the main change is to the villains, making him just a middle man, who steals antiques for collectors. It’s a little more simpler, which this better for younger audiences and, in general, keeps the pacing better.

Obviously, with this film being a DCOM, the target audience is children between 6 and 14, but older viewers will get a few chuckles out of it. It’s a fun film that I’m sure younger Disney fans will love, as who wouldn’t like watching a 4000-year-old mummy learning to deal with modern appliances like cable TV, robotic vacuums and a smart speaker, or being dragged behind the bus, or dealing with the school bully.

Since the film is aimed at younger audiences, the scary moments are kept pretty tame. There are a few little jump scares here and there, plus a some peril, with a little Home Alone style high jinx thrown in. But I can’t see anything from this film giving kids nightmares, as the mummy instantly becomes friendly and the main focus for the humour in the film.

Overall, “Under Wraps” is a fun Halloween film for a new audience; younger Disney fans should enjoy it. It’s simple, but effective.  This will no doubt become a Halloween favourite for a new generation of Disney fans, and it’s also great to see Disney fast-tracking the film’s release onto Disney+ in time for Halloween.  I enjoyed it much more than I was expecting to. There is just something humorous about watching a mummy trying to dance at a Halloween school party and choke slamming hired thugs!

“Under Wraps” is coming to the Disney Channel on Friday 1st October and will be released on Disney+ the following week on Friday 8th October.

Roger has been a Disney fan since he was a kid and this interest has grown over the years. He has visited Disney Parks around the globe and has a vast collection of Disney movies and collectibles. He is the owner of What's On Disney Plus & DisKingdom. Email: Roger@WhatsOnDisneyPlus.com Twitter: Twitter.com/RogPalmerUK Facebook: Facebook.com/rogpalmeruk
View all posts
Tags: review, under wraps