Disney has announced detail on this years Disney Ultimate Toy Drive, which benefits the Marine Toys for Tots Program, as part of its efforts to inspire a world of hope. The campaign kicked off during Good Morning America on ABC, with co-anchor Michael Strahan and ABC News Correspondent Will Reeve announcing the $500,000 donation to Toys for Tots.

Now through December 14, 2021, families and fans can join the Disney Ultimate Toy Drive and give back to those who need it most this holiday season by donating a toy online at shopDisney.com or donating a new, unwrapped toy in person at Downtown Disney District at Disneyland Resort or Disney Springs at Walt Disney World.*

Disney’s relationship with the Marine Toys for Tots Program began in 1947 when Walt Disney and his animators personally designed the original Toys for Tots train logo that is still used today.

“This magical time of year is an opportunity for all of us to deliver joy to our communities, and Disney is proud to continue our longstanding tradition of supporting the Marine Toys for Tots Program through the Disney Ultimate Toy Drive with the goal to make the holidays brighter for children in need,” said Jenny Cohen, executive vice president, Corporate Social Responsibility, The Walt Disney Company. 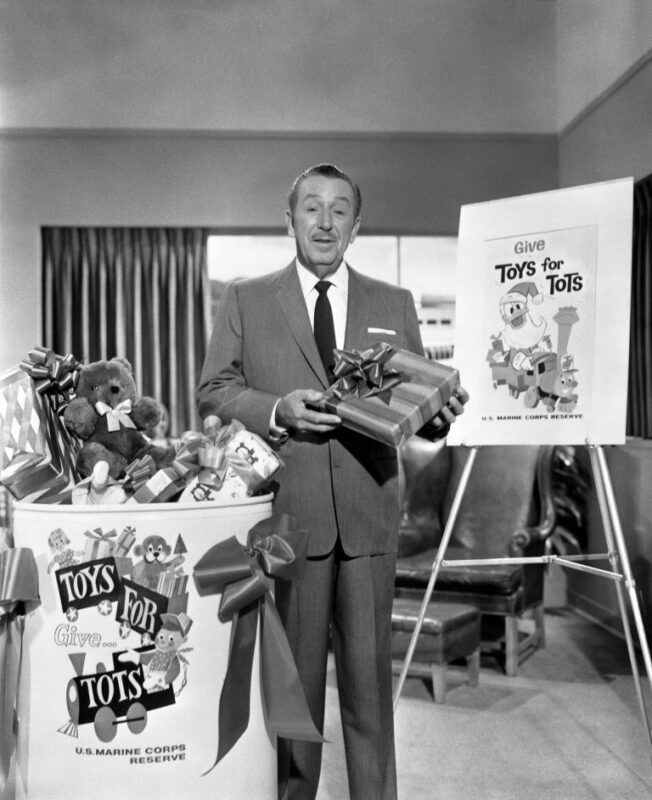 A PSA featuring Disney VoluntEARS will air on ABC, Disney Channel, Disney Junior, Disney XD, Freeform, FX, National Geographic and Hulu during the campaign to encourage viewers to take part in the toy drive. Produced content from across the networks, including ABC’s Station 19, Localish and The Wonderful World of Disney: Magical Holiday Celebration will feature integrations that highlight the season of giving and supporting families in need.

ESPN will also run a week-long segment on Get Up! where Marines will run a toy collection.

In-person events such as the Disney+ premiere of Marvel Studios’ Hawkeye and Freeform’s 25 Days of Christmas drive-in will offer an additional opportunity for fans to take part in the toy drive.

The Walt Disney Company has supported the Marine Toys for Tots Foundation for more than 70 years to bring comfort, happiness and inspiration to children and families in need.

Roger has been a Disney fan since he was a kid and this interest has grown over the years. He has visited Disney Parks around the globe and has a vast collection of Disney movies and collectibles. He is the owner of What's On Disney Plus & DisKingdom. Email: Roger@WhatsOnDisneyPlus.com Twitter: Twitter.com/RogPalmerUK Facebook: Facebook.com/rogpalmeruk
View all posts
Tags: toys for toys