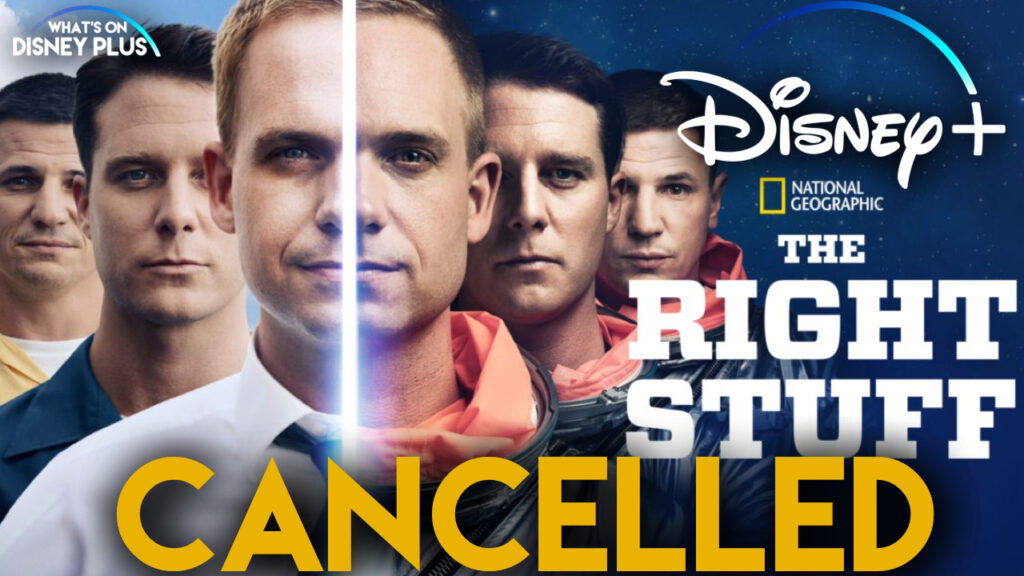 One of last years best Disney+ Originals, National Geographic’s “The Right Stuff”, won’t be returning for a second season on Disney+.

“The Right Stuff,” tells the incredible story of the early days of the U.S. space program, based on the iconic bestseller by Tom Wolfe. At the height of the Cold War, newly-formed NASA selects seven of the military’s best test pilots to become astronauts. Competing to be the first in space, these men achieve the extraordinary, inspiring the world to turn towards a new horizon of ambition and hope.

According to Deadline, Disney has decided to pass on a second season of the show, which WarnerMedia’s Warner Brothers make, and they are trying to see if they can move ahead with the second season on another outlet such as WarnerMedia’s TNT channel or HBO Max streaming service.

Warner Brothers want the original cast to return for the second season, and the current contract cast options expire this weekend, and they’ve asked for a two-week extension to see if the show can be moved to another network.  There had been lengthy discussions between Disney+ and Warner Brothers on coming up with different ideas for the second season, which was likely to focus on a new mission from the 1980s, possibly with a new cast.

Last year, it was revealed that the show was given $13.7 million by the CFC to move production from Florida to California for the second season.  This was the fourth-highest relocating incentive ever awarded under the CFC program.  This additional money for the project is why Warner Brothers are still trying to find a solution.

This is the first Disney+ Original drama series to be cancelled, and honestly, it’s a real shame, “The Right Stuff” was one of my favourite Disney+ shows and is a very well made show.  Unfortunately, it’s considered only a modest performer.  It never obtained the same viewership numbers of other Disney+ shows like “The Mandalorian” or “WandaVision”.

Personally, I do feel had this series debuted on the National Geographic channel, Hulu or ABC first, it might have been seen by many more people.  In 2020, Disney+ was struggling with an identity crisis and “The Right Stuff” just wasn’t clicking with the Disney+ audience at the time, since it was the first drama series not aimed at children or an established fantasy franchise like Marvel or Star Wars.   Many people didn’t realise this show was available on Disney+ and in some ways, this series arrived too early.  Had it dropped later this year, there are many more adults watching Disney+ due to more adult-friendly shows arriving like the Marvel shows, plus other content like “Big Shot”, “Turner & Hooch” plus the addition of “Star” internationally means many more adults are watching content on Disney+.

“The Right Stuff” is available to stream now on Disney+.

What do you think of Disney+ cancelling “The Right Stuff”?

Roger has been a Disney fan since he was a kid and this interest has grown over the years. He has visited Disney Parks around the globe and has a vast collection of Disney movies and collectibles. He is the owner of What's On Disney Plus & DisKingdom. Email: Roger@WhatsOnDisneyPlus.com Twitter: Twitter.com/RogPalmerUK Facebook: Facebook.com/rogpalmeruk
View all posts
Tags: cancelled, the right stuff