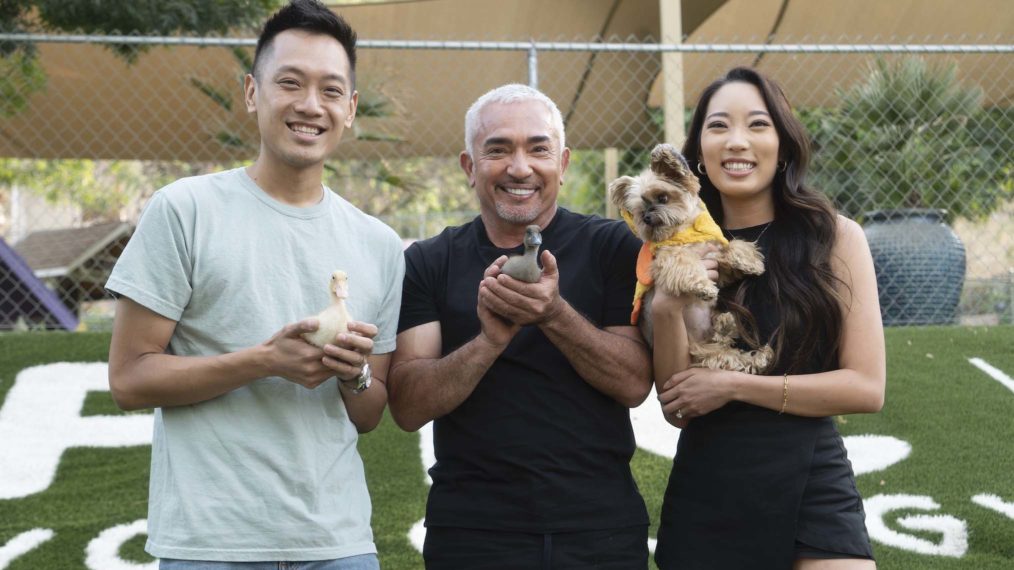 Cesar Millan is returning with a brand new National Geographic series “Cesar Millan: Better Human Better Dog”. The all-new 10-part series brings Cesar back when pet owners need him the most, as the world has changed significantly since Cesar made his television debut 16 years ago. Airing globally in 172 countries and 43 languages, new episodes will air back-to-back on Fridays at 9/8c and 10/9c on National Geographic and encore Sundays at 8/7c and 9/8c on Nat Geo WILD from Friday 31st July. Episodes will also be available to stream on Disney+ in the United States, each Wednesday, starting August 4th.

As humans face a world never seen before, they have turned to four-legged friends as a way to console, bringing harmony and peace to their homes. In fact, dog adoptions are hitting record highs over the past year, with some cities reporting a 90% rise in adoption rates. However, with great power comes great responsibility, and sometimes more pooches can cause more problems. Many rescue dogs can come from a troubled past resulting in unknown trust issues, which can be difficult for new owners. CESAR MILLAN: BETTER HUMAN BETTER DOG showcases Cesar Millan as he takes on the most challenging cases yet, treating a host of new canine behavioral issues impacted by well-intentioned but impulsive owners.

Transformations include cases like Goliath, a dog that was once so unpredictably aggressive he blocked paramedics from entering his home during a family emergency. He is now a medical companion animal, able to seek assistance when his owner suffers a seizure. Also, follow Insta-famous Ducky the Yorkie as he em‘barks’ on a journey with Cesar to gain comfort and composure with his second owner so that the newlyweds can finally pursue their dreams of starting a family. A Rottweiler named Kuma is also transformed from an unstable liability to a calm, confident member of a family with five young children. To complement his efforts, Cesar’s own exotic animal ‘paw’sonal assistants pitch in to assist in the rehabilitation process—including llamas, a parrot and a miniature horse—all full-time residents of the Dog Psychology Center.

Episode descriptions and premiere dates are as follows:

“Fit For Service”
Premieres Friday, July 30, at 9/8c; Streaming on Disney+ Wednesday, Aug. 4
Cesar welcomes a broken pack to the ranch and helps the pet parents overcome past trauma so they can move forward united. Getting a little help from DPC trainers, Cesar turns a dangerous pit bull into a well-balanced dog who can provide help in an emergency. The pet parents of a famous Yorkie seek help from Cesar to get his frantic behavior under control before they start a family.

“One Brick at a Time”
Premieres Friday, July 30, at 10/9c; Streaming on Disney+ Wednesday, Aug. 4
Cesar comes to the aid of a 68-year-old recently retired woman, Judy, whose over-excited Australian Kelpie, Shadow, has ruined her retirement and has developed a strange fixation with bricks. After several attempts to train and correct both the dog and Judy’s behavior, Cesar is able to transform them both, making for one of the most rewarding transformations in Cesar’s career.

“Canine Quarantine”
Premieres Friday, Aug. 6, at 9/8c; Streaming on Disney+ Wednesday, Aug. 11
Cesar aids a family of first responders with three large and out-of-control dogs, including an aggressive pit bull. With help from his own pack, Cesar teaches the family new techniques to prevent dangerous behavior and get this pack back on track. First-time dog owners of an over-excited Bernedoodle with separation anxiety look to Cesar for guidance to bring order to their home.

“Front of the Pack”
Premieres Friday, Aug. 6, at 10/9c; Streaming on Disney+ Wednesday, Aug. 11
Cesar helps a military veteran and his pack get back in order when his German shepherd mix, who helped him through his PTSD, has developed an unhealthy bond with him. And later, a young woman looks to Cesar for help when her dachshund puppy’s dangerous habit of eating trash off the ground has put her in a life-threatening situation.

“Pack Attack”
Premieres Friday, Aug. 13, at 9/8c; Streaming on Disney+ Wednesday, Aug. 18
The Thompson pack is recovering from past trauma at the hands of an abusive ex-husband. Now, the women have suffered another tragedy: coonhound Nyla has become explosively aggressive, accidentally killing one family dog and viciously attacking another. Cesar needs to help the entire Thompson pack heal from past wounds and rehabilitate Nyla before the family is faced with a heartbreaking decision.

“Blind Faith”
Premieres Friday, Aug. 13, at 10/9c; Streaming on Disney+ Wednesday, Aug. 18
Cesar sets out to help a young couple’s cantankerous Chihuahua, whose recent blindness makes him increasingly hostile to be around. And later, a family makes a desperate plea to Cesar to help them rein in their fast-growing and overexcited Belgian Malinois before he becomes too tough to tame.

“Twin Trouble”
Premieres Friday, Aug. 20, at 9/8c; Streaming on Disney+ Wednesday, Aug. 25
Cesar works with a Mexican breed close to his heart when he rehabilitates twin dogs whose over-excited behavior has put their owner at risk of eviction from her apartment building. Later, an actress turns to Cesar for help with an overprotective pint-sized pooch that’s creating too much drama of her own.

“Dogs v. Cats”
Premieres Friday, Aug. 20, at 10/9c; Streaming on Disney+ Wednesday, Aug. 25
Cesar helps a family of seven with their young Rottweiler, who’s grown aggressive and territorial after a burglary at the family home. With help from his own pack, Cesar instructs the pet parents on techniques to exert leadership behavior and reestablish themselves atop the pack. Parents of a young Pitsky with an overactive prey drive toward their cats look to Cesar for guidance to bring order and harmony into their home.

“Tail End of Trauma”
Premieres Friday, Aug. 27, at 9/8c; Streaming on Disney+ Wednesday, Sept. 1
Cesar helps a fearful family, which is still holding on to the pain of losing their first dog in a tragic accident, deal with their two-year-old Black Lab’s similarly aggressive personality. And later, a young 10-year-old girl looks to Cesar for help when her emotional support puppy is causing more chaos than comfort.

“Hijacked Pack”
Premieres Friday, Aug. 27, at 10/9c; Streaming on Disney+ Wednesday, Sept. 1
Cesar sets out to help a young couple’s sensitive Australian cattle dog, whose severe separation anxiety has held hostage the lives of his pet parents for nearly a year. And later, Cesar attempts to calm a blinding Lhasa Apso, who lacks basic hygiene and has almost become too hostile for his exhausted owners to provide his needed eye care.

“Cesar Millan: Better Human Better Dog” follows “Gordon Ramsey: Uncharted”, which is released on Disney+ on the Friday’s after they’ve aired on the National Geographic channel.  Hopefully, this is the start of a new trend of releasing new episodes of shows much quicker on Disney+.

Internationally, National Geographic shows tend to be released on Disney+ at a later date than in the US, but eventually are added.

“Cesar Millan: Better Human Better Dog” is the perfect series for pet owners across America—new and old! Even through troubled times, Cesar constantly overcomes obstacles, instilling faith in disgruntled pet owners. Humans are clearly not the only ones feeling restless with the onset of the dog days of summer. Dogs need help adjusting to the dynamic world we are living in too!

Roger has been a Disney fan since he was a kid and this interest has grown over the years. He has visited Disney Parks around the globe and has a vast collection of Disney movies and collectibles. He is the owner of What's On Disney Plus & DisKingdom. Email: Roger@WhatsOnDisneyPlus.com Twitter: Twitter.com/RogPalmerUK Facebook: Facebook.com/rogpalmeruk
View all posts
Tags: "Cesar Millan: Better Human Better Dog"