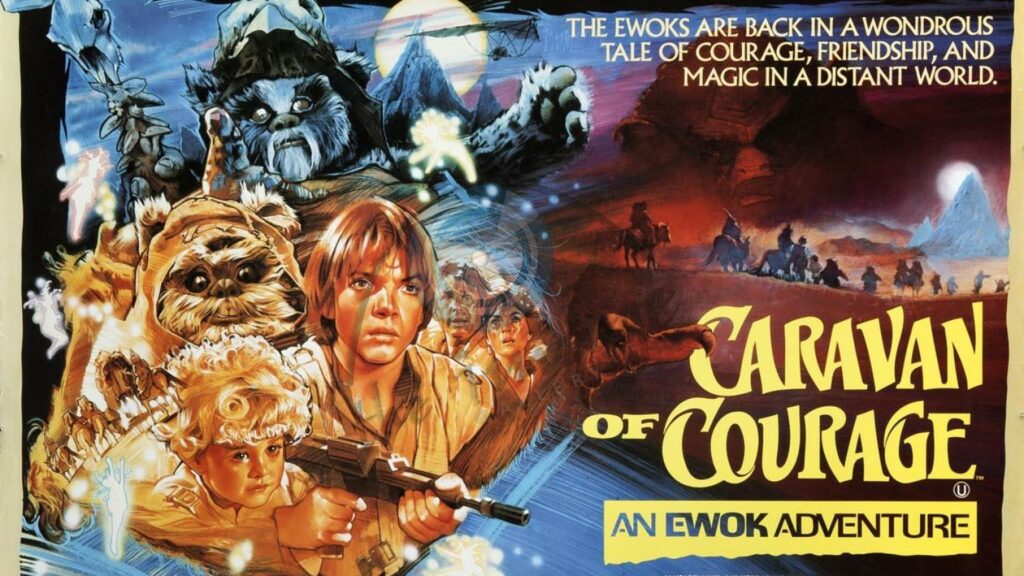 Disney has announced that the classic 1980s Star Wars spin-off movie “Caravan of Courage: An Ewok Adventure” is coming to Disney+ on Friday 2nd April in the United States, UK and Ireland.

In this film, the Towani family civilian shuttlecraft crashes on the forest moon of Endor. The four Towani’s are separated. Jermitt and Catarine, the mother and father are captured by the giant Gorax, and Mace and Cindel, the son and daughter, are missing when they are captured.

The next day, the Ewok Deej is looking for his two sons when they find Cindel all alone in the shuttle (Mace and Cindel were looking for the transmitter to send a distress call), when Mace appears with his emergency blaster. Eventually, the four-year old Cindel is able to convince the teenage Mace that the Ewoks are nice. Then, the Ewoks and the Towani’s go on an adventure to find the elder Towanis.

The film was originally released back in 1984 as a TV movie for Disney’s ABC, but it also received a small theatrical release.  It was watched by 65 million viewers and was the second-highest rating for an ABC movie that year.   The film was also nominated for two Emmys for Outstanding Children’s Programming and Outstanding Special Visual Effects, where it won the Special Visual Effects award.

It stars Aubree Miller, Eric Walker and Warwick Davis returned as Wicket, who is one of the main Ewoks from “Return Of The Jedi”.

Are you looking forward to seeing “Star Wars: Caravan of Courage: An Ewok Adventure” on Disney+?

Everything We Know About Star Wars: The Bad Batch