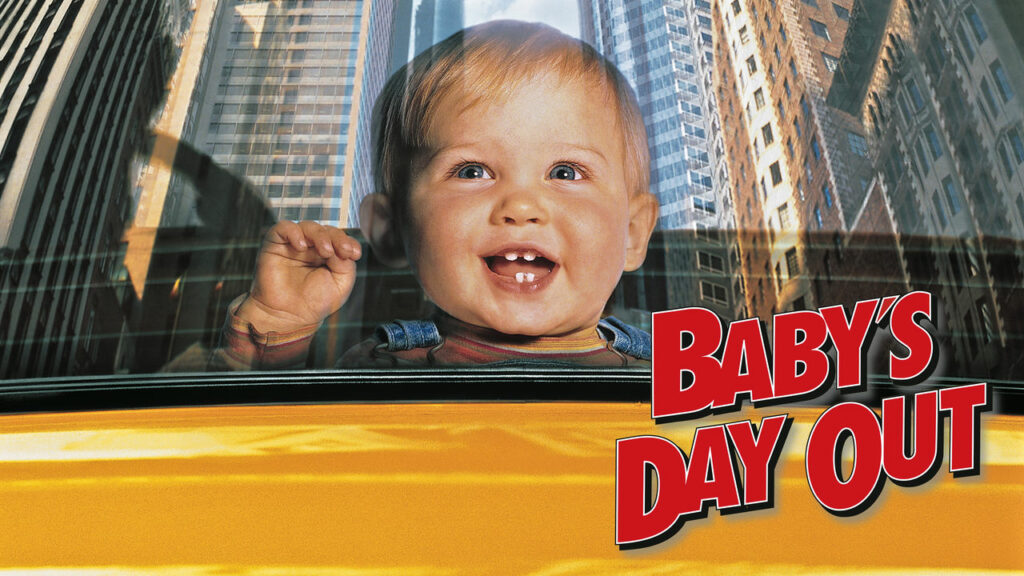 Baby Bink couldn’t ask for more; he has adoring (if somewhat sickly-sweet) parents, he lives in a huge mansion, and he’s just about to appear in the social pages of the paper. Unfortunately, not everyone in the world is as nice as Baby Bink’s parents; especially the three enterprising kidnapers who pretend to be photographers from the newspaper. Successfully kidnaping Baby Bink, they have a harder time keeping hold of the rascal, who not only keeps one step ahead of them, but seems to be more than a little bit smarter than the three bumbling criminals.

The film was originally released in July 1994 and while it wasn’t a box office success, it went onto become a popular cult hit.

It was directed by Patrick Read Johnson and stars Joe Mantegna, Lara Flynn Boyle and Joe Pantoliano. “Baby’s Day Out” was written by John Hughes, who also wrote many of the biggest comedy films from that era including many “National Lampoon’s” films and others such as “Uncle Buck”, “Home Alone”, “Beethoven” and many more.

Are you excited to see “Baby’s Day Out” on Disney+?

Roger has been a Disney fan since he was a kid and this interest has grown over the years. He has visited Disney Parks around the globe and has a vast collection of Disney movies and collectibles. He is the owner of What's On Disney Plus & DisKingdom. Email: Roger@WhatsOnDisneyPlus.com Twitter: Twitter.com/RogPalmerUK Facebook: Facebook.com/rogpalmeruk
View all posts
Tags: baby's day out