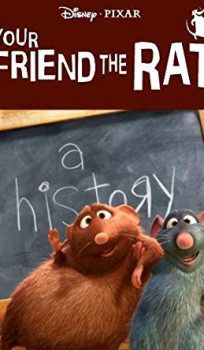 Your Friend the Rat

A forthright Remy and his reluctant brother Emile speak out for oppressed rats everywhere. Remy rolls film explaining that rats see themselves as on a par with men, who, instead, make war on rats. Remy gives a history lesson: heroism in India, black rat migration from the Middle East to Europe during the Crusades, the Black Death of 1347 to 1352, and Remy’s contention that the flea was the villain. Enter the brown or Norway rat – from China. Both travel on ships around the world, with the larger brown pushing out the smaller black, and both live symbiotically with man. Then, Emile explains what’s cool about rats. Trade phobia, Remy tells humans, for utopia. Any chance of that?