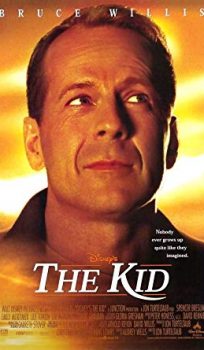 Russ Duritz (Bruce Willis) is a wealthy L.A. image consultant, but as he nears 40, he’s cynical, dogless, chickless, estranged from his father (Daniel von Bargen), and he has no memories of his childhood. One night he surprises an intruder (Spencer Breslin), who turns out to be a kid, almost 8 years old. There’s something oddly familiar about the chubby lad, whose name is Rusty. The boy’s identity sparks a journey into Russ’s past that the two of them take – to find the key moment that has defined who Russ is. Two long-suffering women look on with disbelief: Russ’s secretary, Janet(Lily Tomlin), and his assistant, the lovely Amy, to whom Rusty takes a shine. What, and who, is at the end of this journey?