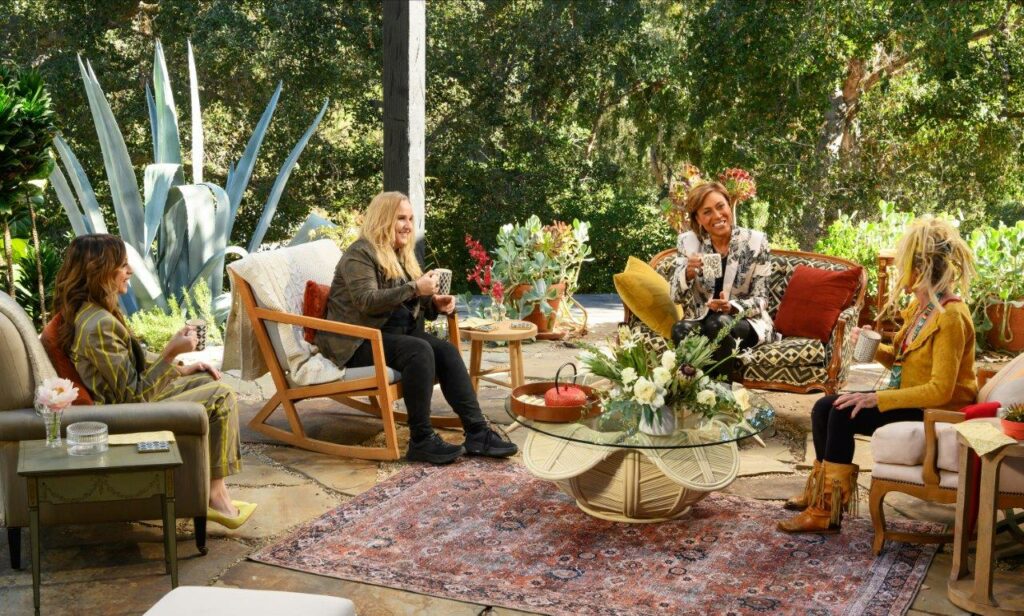 Robin sits with three celebrities and askes them questions, but they can also “turn the tables” and ask Robin or other guests their own questions, which is the “format” for the show, but I didn’t really find that aspect that shocking, because the show felt more like four friends having a chat and Robin was just guiding them along.

There are lots of in-depth discussions about their careers, overcoming adversity, and the importance of feminism in contemporary culture.  There are many deep discussions about becoming a mother, racism, sexism, sexuality, equal pay and much more.

Many of these discussions go into some depth about the struggles these women have had in their lives, and it’s great that they are able to speak so openly and honestly about them.

“Turning With The Tables” feels like the first attempt to start incorporating daytime content into Disney+.  It feels like a show that could air during the day, and I think it’s a market Disney+ should start to look at appealing to more often.  “Turning With The Tables” doesn’t look like it’s cost a fortune to make, though there are multiple camera angles to get footage of anyone’s reactions to a comment.   Generally, it’s a daytime TV type show.  There isn’t anything wrong with that., since not everything has to be on the level of “Loki” or “WandaVision”.  “Turning The Tables” will find an audience. It just won’t be for everyone.

But I’m gonna be pretty honest, as a Brit, I’ve no idea who about three-quarters of the celebrities in this series are, nor who Robin Roberts is (neither GMA nor ABC News air in the UK).  This drastically means the series is less interesting to me but also will limit the show’s success internationally, as the series is very US-focused.   Disney had a similar problem with another feel-good interview series, “Becoming”, that had a poor lineup of internationally well-known celebrities.   This is often a drawback of Disney doing global releases for shows, because a lineup can be extremely strong for one region, but almost like pulling four random people off the street to do a TV show in others.

It’s hard to be invested in a series, talking about their careers and lives, if it’s the first time you’ve seen them.  While their life stories are interesting, not knowing who they are, made it a little difficult.  I resulted to Googling some of the people involved, because the show seems to assume, you know who they are, as they don’t even introduce who everyone is.

Personally, I didn’t enjoy the show. While some of the conversations are interesting, I’m not the target audience for this show.  That being said, there are many interesting points brought up throughout the series and hearing these women talking about their struggles, is enlightening and I’m sure many will find them inspirational.  I certainly learned lots about these women, especially hearing it from them directly, but ultimately, this show is like Marmite, you’ll either love it or hate it.  I personally didn’t enjoy it, but you might, so I’d suggest watching the first episode to see if you enjoy it.

All four episodes of “Turning The Tables With Robin Roberts” are coming to Disney+ on Wednesday 28th July.

Roger has been a Disney fan since he was a kid and this interest has grown over the years. He has visited Disney Parks around the globe and has a vast collection of Disney movies and collectibles. He is the owner of What's On Disney Plus & DisKingdom. Email: Roger@WhatsOnDisneyPlus.com Twitter: Twitter.com/RogPalmerUK Facebook: Facebook.com/rogpalmeruk
View all posts
Tags: review, turning the tables