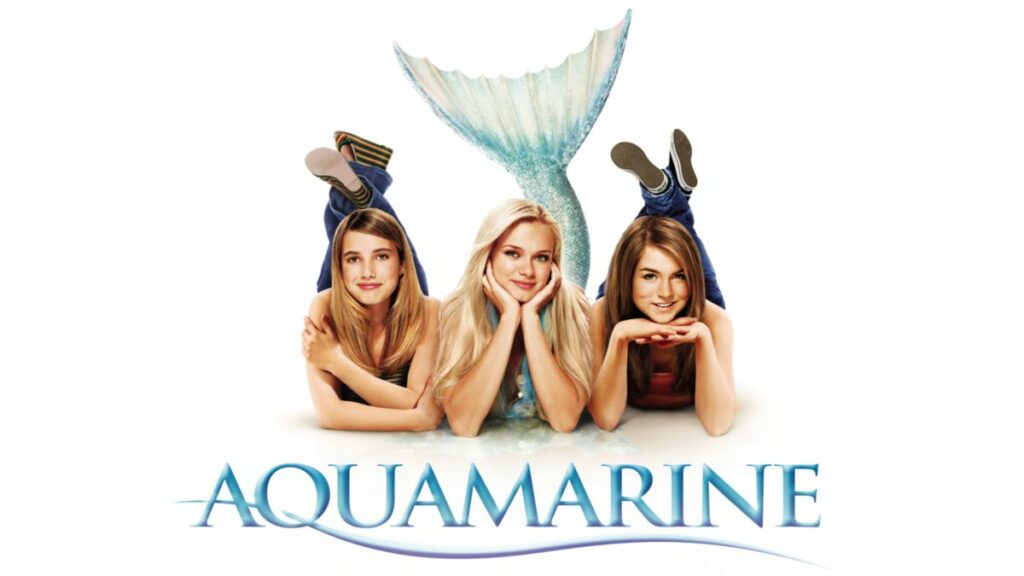 More than just a story about mermaids, Aquamarine is a story about friendship and love. But how much do you know about the production of this feel-good teen flick from 20th Century?

Get ready for a deep dive into the Floridian waters (actually Australia), as we look at the secret stories, filming locations, and singable songs.

The film is already available on Disney+ in the UK, Ireland, and Canada, having arrived back on May 28. In the United States, the film will begin streaming this Friday, August 13.

If you think that the movie industry is glamourous, perhaps this’ll change your mind. Every day, it would take two hours for Sara Paxton to get hair and makeup, and another two to get her foam latex tail glued on.

The mermaid tail in Aquamarine was created by Australian special effects firm JMB FX. Each of the roughly 5000 scales was applied by hand. There was a number of tails made: a “hero” for Sara to wear, another for the stunt performer, and a “skirt”, which would be used with an animatronic for more fine-tuned movement.

They’ve done a variety of work for Disney-owned films, including Star Wars: Attack of the Clones (2002), Narnia: Voyage of the Dawn Treader (2010), Pirates of the Caribbean: Dead Men Tell No Tales (2017), Thor: Ragnarok (2017), and this September’s Shang-Chi and the Legend of the Ten Rings.

2. Don’t let the American accents fool you: most of the actors were Aussies.

Aquamarine was filmed in Australia, and so the only American actors in the production were Emma Roberts, JoJo, Sara Paxton, Arielle Kebbel and Jake McDorman.

Jojo’s movie mom Claudia Karvan is a mainstay in local film and television, to the point where she’s on the Australian Film Walk of Fame. Emma’s Grandpa Bob is also on the Walk, and received the nation’s highest honour, the Order of Australia. 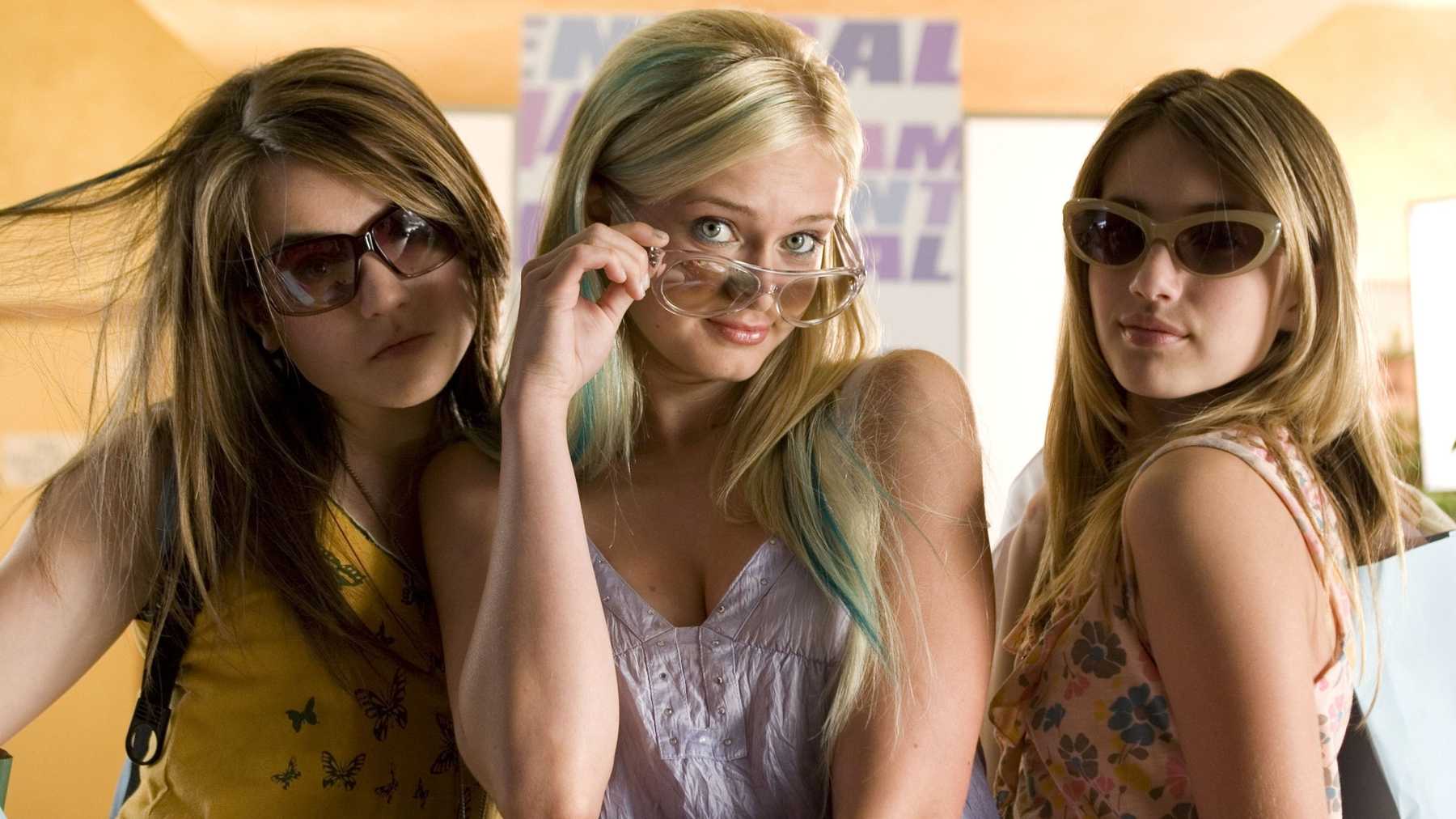 If you’re reading this in the northern hemisphere — North America, Europe, Asia — that probably sounds frigid. But of course, the seasons are flipped down south of the equator, and Australians regularly head to the beach for Christmas.

While the film was released in March 2006 in the US and Canada, it waited until September 28 in Australia, to be timed to the start of their school holidays.

Claire’s parents died in a boating accident, so Emma Roberts was to play her character as reluctant to get in the water. That was a challenge for an experienced swimmer like Roberts:

I love the water. It was so difficult because we were in that tank and it was so much fun. I would always be swimming around, having a great time, and the director, Liz, would come to me and say ‘You look like you’re having way too much fun over there. You need to look like you’re struggling out there.’ So I had to slow down and do the doggy paddle really slow.

5. You might not recognize him, but you’ve seen Leonard actor Bruce Spence before. 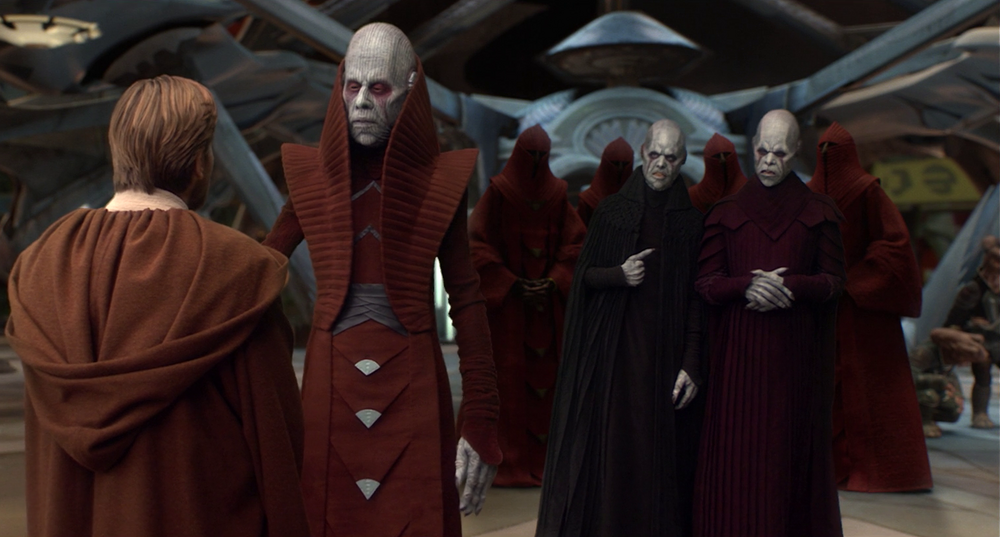 Her first directing credit was Eyeball Eddie, a 29-minute short about a wrestler with a prosthetic eye. So how did she go from a dark comedy to a family flipper feature? Well, sexism.

As one of the only young female directors in the industry, “everything I was sent had princesses or mermaids. The fact is that I love that audience. It’s receptive with a more fertile imagination in a lot of ways,” she told The Hollywood Reporter.

Being an inexpensive movie, and doing well on DVD, Allen credits Aquamarine for opening doors. She’s directed a variety of projects since, everything from Ramona and Beezus to episodes of Hawaii Five-0 and Why Women Kill.

Her next film is Sneakerella, coming to Disney+ in 2021.

7. The surf shop was actually a Thai restaurant.

The coastal town of Kingscliff, New South Wales, was chosen for a street scene, but the crew flipped the Gold Coast businesses into completely new identities. For example, the surf shop was actually the Red Hot Thai Cafe,

Buses branded as Koala Koaches became the Tampa Transporter, and the gas station’s prices signage from litres to gallons. Luckily the town’s Marine Parade roundabout is home to a fig tree, a species that also grows in Florida.

Not all buildings were adapted. The beach club was built from scratch, in the city of Tallebudgera, Queensland.

8. JoJo is afraid of dolphins

In the film, dolphins tow Hailey out to retrieve starfish. During promotion for the film, Joanna Levesque admitted to her phobia of the bottle-nosed beasts:

I’m afraid of sea creatures and things that could potentially bite me. My dad’s best friend had her arm bit by a dolphin and, ever since then, I was so frightened. I was like ‘oh my God, they’re going to bite my neck and I’m gonna die. I’m gonna bleed.’ Thank God they were nice, but I took it really emotionally.

9. Emma didn’t need to study the lyrics to “Island in the Sun” before recording the song

Emma Roberts didn’t need much preparation before recording her song on the film’s soundtrack:

We had to shoot the Last Splash dance scene, and that was the song that was playing. So we probably heard that song about a hundred times, and I got back to LA and they asked if I wanted to sing that song. I was like, ‘Yeah, I guess.’ I had heard it a trillion times so I knew it by heart already. I like Weezer, so it was cool.

As the film was released by what was then 20th Century Fox, you’d think that Disney now owned the rights. Wrong, mostly. Three of the four labels associated with the release are owned by Sony.

You can listen to 11 of the 12 songs for free on Spotify, all but the Jonas Brothers’ “Time for Me to Fly.”

Even weirder? The soundtrack itself is apparently now owned by Universal Music Group. The company has uploaded all 18 of those tracks to YouTube:

Aquamarine is available on Disney+ now.

Nick Moreau writes about vintage Disney content, on WhatsOnDisneyPlus.com and DisKingdom. He works at an archives, delving into his community's past.
View all posts
Tags: aquamarine