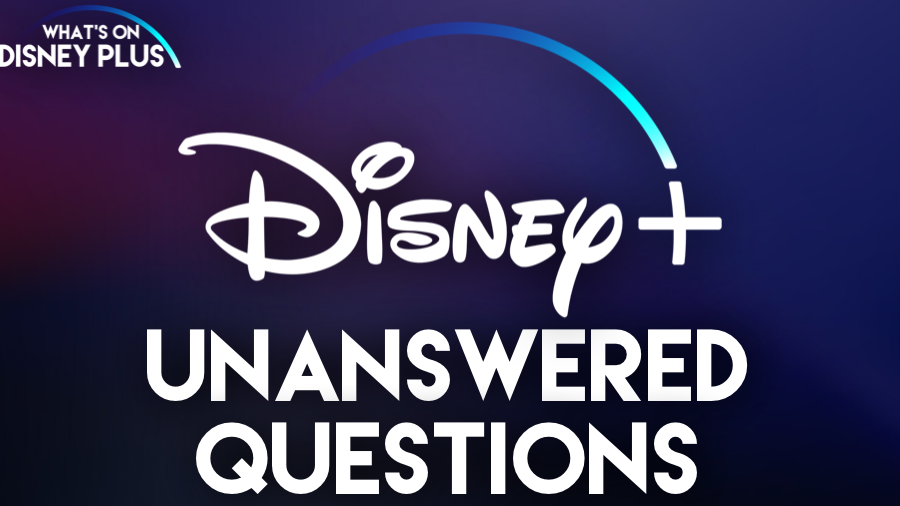 Disney+ is set to launch in just under a weeks time and while Disney has been very active in promoting that the service will be available in the US and Canada from November 12th, there are still many questions unanswered that we just don’t know the answers to.

Within our own Disney+ community, we are being asked hundreds of questions a day by people, many of which, we just can’t answer.  And asking the official social media accounts, usually gets a generic response or Disney just hasn’t publically answered the question before.

Here are just a few of the most commonly asked unanswered questions:

How Quickly Will New Shows Appear On Disney+?

Disney+ will be featuring shows from National Geographic, Disney Channel, Disney Junior and also select titles from ABC.  But we don’t know how quickly shows will appear on Disney+ after they’ve broadcasted. Will it be like Hulu? Where they are available within 24 hours.  Will it be like DisneyNow? Where shows appear at the same time (sometimes even before). Or will it be weeks or months after they’ve finished their runs on traditional television?

How Quickly Will New Movies Appear On Disney+?

Disney hasn’t yet officially given a timeline on how quickly new theatrical releases will be available on Disney+, they’ve said they’ve got to finish their cinema runs and be released on home video.  But we don’t have an official word on how quickly. 6 months? 8 months?

With multiple streaming platforms, Disney has already begun shifting and moving content away from DisneyNOW and Hulu, but currently there is still a wide selection of content still available on Hulu.  We know library content from DisneyNOW will be moved over to Disney+, but what’s considered “library”?

Will There Be A Disney+ & Hulu (With No Ads) Bundle?

There has been lots of promotion about the super competitive bundle of ESPN+/Disney+/Hulu (with Ads), which is priced at $12.99 and available from November 12th.  But lots of people within the community are more interested in a bundle without sports and commercials.

Will There Be Content Added Daily Or Just On Fridays?

Disney has been promoting all the new Disney+ Originals will be releasing on Fridays, with a weekly release schedule for most of the new series.  It’s unclear if Disney+ will just be getting new library content once a week, or if they will be staggering out content throughout the week.

Will Disney+ Announce A Release Schedule?

Currently other streamers like Netflix, Amazon and Hulu announce what will be coming to their platforms over a month in advance.  But at the moment, we don’t have that information for Disney+.

When Will Disney+ Launch In Other Countries?

While Disney has been very open about the release dates for the US, Canada, Netherlands, Australia and New Zealand.  They’ve said next to nothing about their future rollouts in other territories since they released a small chart during April’s Investors Day and mentioning it will take a few years.

This has caused no end of questions, you only have to look at a social media post and you will see lots of people from countries like the UK asking when its being released.  It makes sense on the one hand to try to keep the initial launch simpler (even Disney have been announcing the wrong date for Australia/New Zealand in social media posts), but simply ignoring it is causing more frustration for potential customers.

Will Disney+ Be On Amazon Fire Sticks & Tablets?

Probably one of the most commonly asked questions we currently have in our Disney+ Facebook group is about the app being available on Amazon devices.  We’ve had reports as to why there is a delay, as there is a dispute between Disney and Amazon on advertising revenue shares, but nothing officially has been announced. With roughly a third of streaming users having access via Amazon devices, this is a major problem for users.

Will Disney+ Be On “X” Device?

Following on from the Amazon device question, we still get asked dozens of times a day about other devices, while Disney has put out an official list, it’s still very vague, which causes more confusion, especially when they released an image in April showing devices like the Fire Stick and Nintendo Switch.  And the advice about Smart TV support is extemely vague.

We’ve had tens of thousands of questions over the past year asking for specific movies and shows on Disney+.  Many of them have now been officially confirmed, but there are still hundreds of questions a day asking about things that haven’t been.  Many can easily be explained, such as contract issues with Netflix. But there are many more that can’t be explained, they might be there at launch or spread out after the launch.

These are just a few of the most commonly asked questions about Disney+ we’ve been asked over the past year, which we still don’t know the answer to.  Hopefully by next week, when Disney+ launches officially in the US & Canada, we will start getting a clearer idea for some of these questions.

Unfortunately, until then, we’ve just got to wait and see.